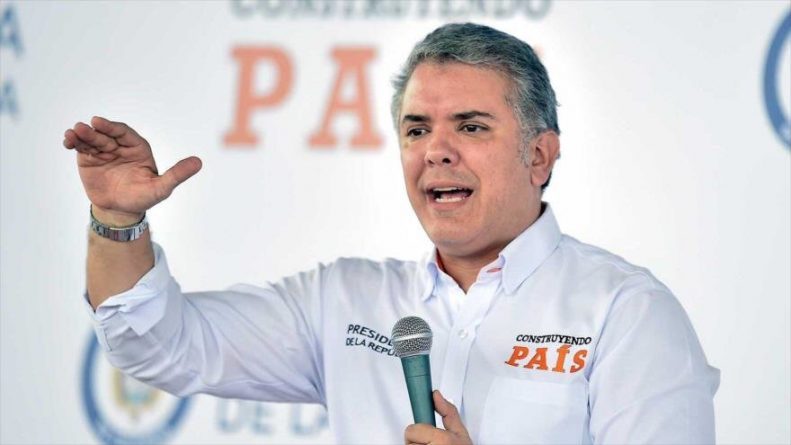 The president of Colombia, Iván Duque, does not recognize the protocols that Cuba mentions about the ELN, and insists that Havana should surrender the heads of the guerrillas.

Iván Duque has once again requested Cuba to hand over to the 10 negotiators of the Colombian guerrilla National Liberation Army (ELN) that make up the delegation of peace in the island, after ordering Friday lifting of the suspension of the arrest warrants against them after the deadly car bomb attack on Thursday in Bogotá (capital).

Disregarding Duque’s allegation, the ELN have not yet claim responsibility for the terrorism attack as is the custom for this guerrilla organization.

This in response to the Foreign Ministry of Cuba, that through a tweet, stressed that the island, as guarantor of the dialogue process, will act “in strict respect” to the “protocols” signed by Bogotá and the ELN, in case of rupture of the negotiation. Duque -in a clear disrespect for the peace talks and agreements- has indicated that there has been no rupture of any dialogue, since his Government did not agree to the aforementioned protocols and never sat down to negotiate with the guerrillas in Havana (the Cuban capital).

“I want to make it clear and make a respectful call to that Government (Cuba). What was presented this week is not a difference of opinions during a negotiation, it is not the breaking of any dialogue because we had not made a presence at that table waiting for the hostages to be freed and the terrorist attacks to stop,” said Duque on Saturday.

Duke, who made this pronouncement in an act in Fresno, in the department of Tolima (center west), has attributed to the ELN the “criminal act” that left 21 dead and dozens of wounded. After underlining that “no act of this nature merits any protocol that prevents justice from being done,” he has asked the Government of Havana “to hand over these criminals so that justice can be done.”

Shortly before on the same day, the Colombian Foreign Minister, Carlos Holmes Trujillo, in response to the Cuban Government, has emphasized that “there are no protocols that protect terrorism.”

“Before the brutal attack that killed 20 young people, the Attorney General has reactivated 10 arrest warrants against members of the ELN who are in Cuba. Colombia’s response has been one of strength and institutional coordination with the entire State,” said the Colombian Foreign Minister in his Twitter account.

The ELN, the only guerrilla active in Colombia since the peace agreement reached in November 2016 between the Government and the Revolutionary Armed Forces of Colombia (FARC) – disarmed and converted into a political party – engaged in a peace dialogue with Bogotá during the Government of Juan Manuel Santos (2010-2018).

Santos successor, Iván Duque, has conditioned however the resumption of dialogues with the ELN to suspend its “criminal activities”, while the guerrillas in turn accuse the government of wanting to “shatter” the postponed peace process.

Duque is a protege of former President Alvaro Uribe that had a zero tolerance policy towards the guerrilla movements in Colombia situation that radicalize the lengthy civil war in that country with more than 60 years of a bloody conflict.