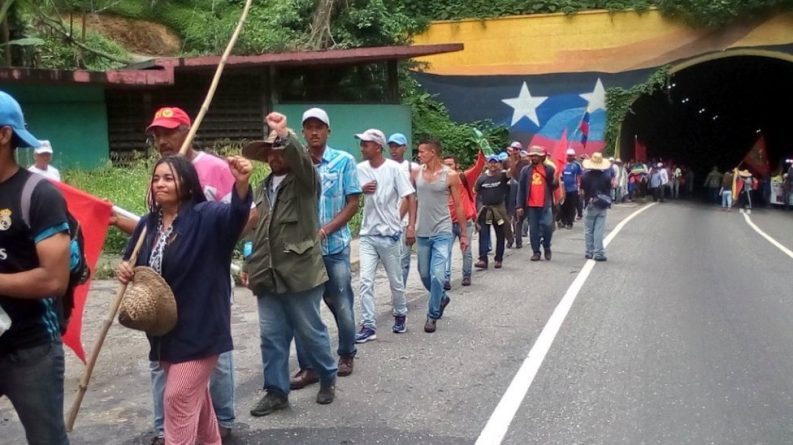 Editorial Note: In recent weeks a debate have been arising among chavistas within Venezuela as a result of the detention of 10 comuneros in Portuguesa state. That has raise a lot of concern -very understandable- among  most radicals but also in the cadre. The debate started with the detention but reaches the public in a piece by Elias Jaua criticizing the decision in the framework of the current debate on increasing production after the radicalization of US sanctions. As a response to Elias Jaua’s piece, the Minister of Agriculture Wilmar Castro-Soteldo in his weekly TV show responded in a very revolutionary and respectful way to the complaints. You can watch the video clicking here (we haven’t found one with translation yet, volunteers are always welcome) and you can read Jaua’s piece here (we will have it translated this week-end).

Some accuse the comuneros of being radical, taking risky actions, and breaking the law during a very complex moment in Venezuelan history and others accuse  Minister Castro-Soteldo of being pro agro-business and not revolutionary enough.

The peasant vanguard that emerged last year, after the Admirable Peasant March, continues to develop a very particular struggle: they unreservedly support the government in the face of imperial threats, but raise a critical voice against what they classify as internal sectors allied with interests of latifundio and agroindustry.

Gerardo Sieveres is one of the leaders of that litter. He is part of Causa Campesina, which in turn is integrated into the Platform of Peasant Struggles. In 2018 he was in the march and also in the hunger strike that was conducted later.

Now he is involved in the construction of an alternative model of agricultural production that can be contrasted with that promoted by the Ministry of Agriculture and Lands (MAT), which they question ideologically.

Sieveres talked with LaIguana.TV about these issues. Follows, a version of the dialogue that maintained with the journalist Clodovaldo Hernández:

-The Admirable Peasant March is nine months away. What estimate can be made? Are we going to give birth?

-Well, last year we went out and that is very important because the peasant sector plays a leading role because it produces 80% of what is consumed at the table of Venezuelans. If we summarize the scope of that struggle, in our internal estimation we consider that we had three great victories: the first was to arrive in Caracas after 23 days of walking. In the midst of the march, arriving was a dream. We demonstrate what we are made of, and did not speak only of the 76 that who undertook the march or the two thousand that we arrived with at the capital, but we demonstrated what the Venezuelan people are made of. When we assume a challenge with responsibility, we achieve the objectives, as happened 200 years ago with the liberation of the entire continent by our patriotic army. The second victory was talking to the president, In spite of the unprecedented campaign in which we were invisible, we tried not to leave, they put up barriers and obstacles, there were Sebin (Intelligence Service) incitements during the 23 days. The third victory, which is the strategic victory for us, is that the president summed up in his speech the need to make a profound revolution in the field.

Sieveres recalled that President Maduro took the word to the peasant leader Arbonio Ortega about the need to hold a National Peasant Congress. In his opinion, despite presidential support, this meeting of all rural Venezuela has been sabotaged by the authorities of the Ministry of Agriculture and Lands due to the great interests that move within the government and that revolve around a model of productive agriculture that leans more toward the private sector and agro-industry.

Sieveres explains that the National Peasant Congress has not been carried out so far not only because of the sabotage of the MAT, but also because the peasant leadership is determined to previously define a concrete alternative model, if possible tested in communities of small producers. “We define it as a Model of Productive Sovereignty that is oriented to satisfy the needs of the people, not those of the market,” he points out.

RELATED CONTENT: Venezuelans: “We Want to Resolve our Problems by Ourselves”

-I wanted to expand on that aspect because you have the impression that the Peasant March was only claiming land tenure, but your proposal goes much further.

-We are trying to give a proper reading to the political moment. We frame this new stage in three major strategic objectives. The first is to organize the land for production. There are more than six million hectares that have been rescued by the Bolivarian Revolution, which are the heritage of all Venezuelans. At this moment, when the empire attacks us and violates our sovereignty, it is necessary that we contribute our effort in organizing the land for production. In fact, when he received us, the president declared the agrarian issue an emergency and delegated it to a special commission of the National Constituent Assembly, to Diosdado Cabello, and to the vice president, Delcy Rodríguez. The Ministry of Agriculture and Lands was not present because it does not fit the new model of productive sovereignty that we must build. We have been working on that model, we have territorialized it. In the last two and a half months we have made the first applications in the plains of Portugesa, in the Sierra de San Luis and in the east of the country. We have to consolidate these experiences in order to bring them to Congress because a peasant movement must emerge from there, to articulate all the organizations and give support to a governmental body for the issue of agrarian policy.

– How long will that preparation take to go to Congress with a concrete proposal?

-In this moment, times are accelerated. Somehow, by outside decisions, our great collaborators have been Barack Obama and Donald Trump, who have accelerated the schedule. At this moment, the only way to defeat the strategy that Obama implemented in March 2015, when he described us as a threat, a policy that Trump has sustained, is to produce in Venezuela, and for that the peasantry plays a leading role. We are working in a sustained way to achieve that productive sovereignty and to resist until we win in this malevolent war. The situations that loom over Venezuela are not going to be solved with elections or with a change of government. The empire will stop bothering Venezuela when we run out of wealth and the (oil/gold ) reserves that we have.

The interviewee indicated that the model is based on the integration, first of all, of five small production units (family plots, mainly) to form a predial (land rights based) development cell. Then, the cells should be integrated into nuclei, the nuclei in zones and the zones in territories. The integration in property development cells allows us to practice collaborative modalities of work such as the hand back, the cayapa or what in the Sierra de San Luis call “ganarle el lomo” to the other. They consist of everyone coming together to work each day on a different plot (that’s why groups of five are made). That increases the capacity of the workforce. For the implementation of these systems, the peasant leaders have the advice of the Popular School of Agroecology “Heroes of Canaima” and “Communal Life”.

The model is the opposite of the one held by the current Ministry of Agriculture and Lands, which in Sieveres’ judgment is so tied to the interests of the agro-industry that they even changed the name of the firm to incorporate the word “productive”, understood as linked to the large latifundios and industrials. “It is proven that the food supply is not guaranteed by the agro-industry model,” he said. We have in Papelón a highly productive community, La Bendición Toroba, a community of 132 farmers who currently guarantee 40 tons of plantain every fifteen days, while in drought. That amount will rise between ten and fifteen times when winter comes. But they lack a small bridge to get their production. In winter they must transport it by the river, which makes the product more expensive. The most outrageous thing is that next door is the Mata de Guaica herd, which belongs to the State but that this administration of the ministry gave it to El Tunal. This herd has large machinery and ability to move equipment, but that does not contribute to the bridge that the community needs it. ”

– What is the situation of peasant struggle in terms of the security of its leaders? Have there been more murders after the March?

-Yes! As far as we have counted, twelve colleagues have been killed  directly related to the March. In Guanarito, a month ago, three young boys were killed. This unfortunate situation is the result of the land being given to the farmer, but the supposed owner is left alone inside. This unleashes dangerous  situations that end in deaths. That is why in order to make the revolution in the countryside it is necessary to generate a justice system structured from the countryside and by peasants. Our proposal is to make productive regiments with the  capability of arms and articulated to the militias. For example, in one of our pilot experiences, we have a strategic alliance with the Municipality of Guanarito to collect the production there, and that from the municipality a policy of supply and exchange be developed with other municipalities and organized communities. Guanarito is a key place for us because we see it as the most important border crossing center in Venezuela, if the first ring, which is on the border, is broken. We are going to fight in Guanarito and one way to organize the defense is to organize the production, give the farmer his rightful place for the multiple objective of producing food for the resistance, to supply the people, and also for the fight in case they attack us .

Sieveres praised the designation of Major General Carlos Leal Tellería in the Ministry of Food, who comes from directing the Bolivarian National Militia, that is, he understands very clearly the relationship between the supply of food and defense.

– Cases have been reported in which companies nationalized or created by the State in the past have been handed over to the private sector. Are they isolated cases or are there many throughout the country?

-Punting: will the Peasant Congress be held this year?

-I must say with great responsibility that one of those who has boycotted the issue of the date is Gerardo Sieveres. We have done that because we have the great concern about reaching Congress with a concrete proposal, an already consolidated example, a well-structured production area, so that what happened in the congresses of 2006 and 2014 does not happen again. Then we did not get anywhere. We can not repeat that, it would be irresponsible. We intend this Congress to be held this year, but we see it as the national convocation space for the entire peasant movement to build a large peasant organization. We have to take that model as a concrete sample, not as a theory or an etheric proposal. That’s why we are kicking the country and we thank the comrades of the popular movement, of LaIguanaTV, of those who understand communication as a way of doing revolutionary politics because it is thanks to that popular movement and the alternative media that we have managed to break the barriers that our own government puts up … because even if they do not want us it is our government and at this juncture we have to defend it and we will defend it.