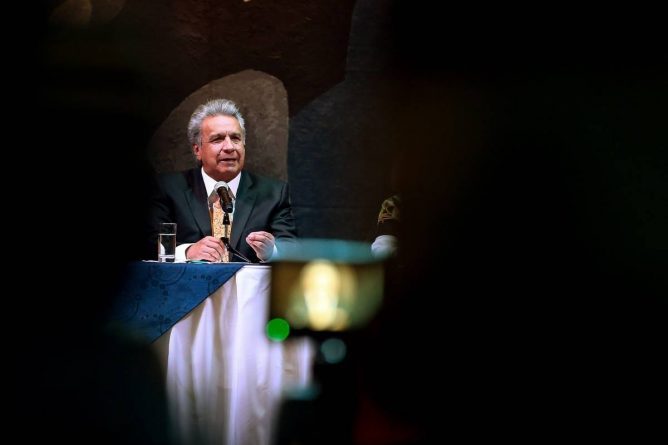 An investigation links the president of Ecuador, Lenin Moreno, with the offshore company Ina Investment Corporation based in Belize.

An investigation published on Wednesday on the website “La Fuente”, points to a presumed link between the president of Ecuador, Lenin Moreno, and an offshore company established in Belize in 2012.

The company is Ina Investment Corporation, created by the President’s brother in March 2012 in Belize. According to the information, the company managed accounts in the Balboa Bank of Panama, from which products (furniture and rugs) were purchased, which the Ecuadorian president admitted having received in his apartment in Geneva, Switzerland, in 2015. In 2016, the same accounts made at least two bank transfers for the purchase of an apartment in Spain.
The striking movements of Ina Investment Corporation continued in 2018 when the former Ambassador of Panama in Mexico, Ricardo Alemán Alfaro, applied to Mendoza, Arias, Valle & Castillo (MAVCCO) for the urgent dissolution of the company.

The request for rapid dissolution of the company would be related to the publication in November 2018 of the supposed connection with the Moreno family in at least three digital portals.

During his tenure, President Moreno has been very emphatic in his disagreement with companies linked to tax havens. In 2017, he held a popular consultation to prohibit state officials from carrying out operations with offshore companies.

Movimiento Revolución Ciudadana asks for Moreno’s resignation
“It is extremely serious that the highest authority of the State is involved in reprehensible acts and it is urgent that the controlling authorities assert themselves, the country is watching them and awaits their prompt action with the same speed of cases where, without evidence, they have tried and imprisoned people,” demanded the Movement of the Citizen Revolution in a statement released by the former president, Rafael Correa.

The political movement warned that the requests to revoke President Moreno’s mandate will be increased, after the “so shameful act that blemishes his actions, not only in his time as president, but long before, trampling the will of a people who trusted him”.

For his part, the Ecuadorian president rejected the blemish of his “honor and that of my family” with a “string of data and scribbles that have nothing to do with me.”