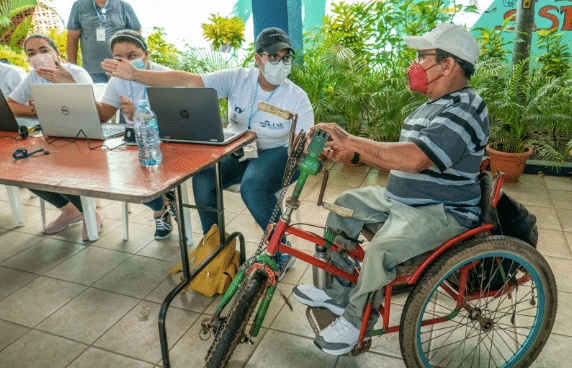 US President Joe Biden hectored Nicaragua about their November 7 elections accusing them of “a pantomime election that was neither free nor fair, and most certainly not democratic.” Three days earlier, the US lavished a $650mil arms deal on Saudi Arabia, a monarchy where they don’t even pretend to have elections for higher office. Clearly more than democracy is at issue with the US offensive against Nicaragua.

At issue is what Biden described as “the arbitrary imprisonment of nearly 40 opposition figures since May, including seven potential presidential candidates.” An objective investigation reveals: (1) the motivation for the arrests had nothing to do with the election and (2) the effects of the arrests had no impact on the election.

The US government, along with its political allies and corporate media, have spun the arrests into a public relations nightmare for the ruling Sandinista government of President Daniel Ortega in Nicaragua. The arrests are being used as a pretext for a concerted operation to delegitimize the genuinely democratic elections of a government seeking to be independent of Washington. This is part of a larger regime-change campaign against the left-leaning governments of Cuba, Venezuela, and Nicaragua; what former US National Security Adviser John Bolton called the “Troika of Tyranny.”

RELATED CONTENT: What I saw on Election Day in Nicaragua

The seven presidential “pre-candidates”
The corporate press, hostile to the elected Nicaraguan government, dubbed seven of those arrested as “pre-candidates.” However, none of them were associated with the ballot-qualified political parties in Nicaragua, and not one of them had a popular following outside the Washington Beltway. In short, they were not seriously running for presidential office and, if they had been, none would have mounted a serious challenge to the ruling Sandinistas.

Even if the “pre-candidates” were legitimate presidential hopefuls, the fact that there were seven of them demonstrates that the US was unable to unify the opposition around a single candidate. Had the seven “hopefuls” run, they would have further split the opposition vote. The notion that the Sandinistas arrested the seven to ensure they would win is a fiction.

The violent opposition has been in disarray ever since their 2018 coup attempt fizzled and a tidal wave of public opinion turned against them. The US had spent tens of millions of dollars generating the opposition but was unable to get the fractious parties to coordinate amongst themselves.

Nicaragua’s electoral oversight body, the Supreme Electoral Council (CSE), is an independent branch of the government. Both Sandinista and opposition party representatives are on it. Rather than suppressing the opposition, the CSE extended the deadline for parties to register to run in the November elections to encourage a diversity of voter choices. However, one far-right grouping, headed by a former Somoza general, did not get their paperwork in order on time and was therefore not certified.

The seven “presidential hopefuls” plus 30 others were arrested for another reason. Following the 2018 coup attempt, Nicaragua passed two laws that criminalized promoting foreign interference in Nicaragua’s internal affairs, seeking foreign military intervention, organizing acts of terrorism, and promoting coercive economic measures against their country. They were arrested for these illegal activities; activities, it should be noted, that are similarly prohibited by the US’s own FARA Act, after which the Nicaraguan laws were modeled.

US has never supported democracy in Nicaragua
Biden castigated Nicaraguan President Daniel Ortega for being “no different from the Somoza family.” Perhaps Biden forgot that the US installed and supported the Somoza dictatorship, while the US regime-change campaign is trying to do exactly the opposite with the current Sandinista leadership.

If Daniel Ortega were truly “no different from the Somoza family,” the US would be supporting the Nicaraguan government rather than trying to overthrow it. In fact, an examination of the historical record indicates that the US has never supported democracy in Nicaragua.

The US Marines landed in 1912 and occupied the Central American country on and off until the Somoza dynasty dictatorship replaced direct US control. When the Sandinista National Liberation Front (FSLN) overthrew the dictator in 1979, the US resurrected remnants of Anastasio Somoza’s national guard, the contras, that brutally terrorized the fledgling republic.

To this day, the US has opposed the Sandinistas. Empires like that of the US do not support democratic self-determination of vassal states. Dating back to the 1823 Monroe Doctrine, Latin America and the Caribbean are regarded as the empire’s “backyard.”

Popularity of the Sandinistas
Biden carped that the democratically elected Nicaraguan leadership is “long unpopular.” However, Biden’s own plunging approval rating of 42.8% isn’t anything to envy. In contrast, a reliable pre-election poll indicated 73.1% approval for President Ortega. More to the point, the popularity of a country’s politicians is an internal matter and not the business of the US.

It is noteworthy to understand why the current Nicaraguan “regime” enjoys considerable popular support. Fundamental to this understanding is a long and concerted history of grassroots organizing by the Sandinistas. They led a successful revolution and today continue deep organizing in poor urban barrios and rural areas, especially among the youth, Indigenous and Afro-descendent Nicaraguans, and women.

Second, the “regime” enjoys popularity beyond the Sandinista base as an embodiment of national sovereignty, unity, and peace in reaction to the long and lamentable history of US intervention. This is especially the case after the US-instigated coup attempt of 2018. Although this is anecdotal, just about everyone I spoke to in Nicaragua had a horror story of the recent violence.

More than other elections, this November 7th sparked celebrations lasting through the night and into the early morning on the streets of popular neighborhoods throughout the country.  It marked, in the popular consciousness, an official “end to the terrible nightmare and the return to a peaceful process of nation building,” in the words of Abigail Espinosa, a small farmer from Masaya.

Third, the “regime” has achieved so much with few resources. As Nan McCurdy, a United Methodist missionary who lived in Nicaragua for over 30 years, reports: “Since 2007 [when the Sandinistas returned to power] poverty has been cut in half, maternal mortality has dropped by 70%, infant mortality by 61% with a 66% reduction in chronic malnutrition in children 6 to 12 years old. With a high percentage of small and medium-scale farmers and much government investment in training and loans, they have achieved 90% food sufficiency.”

The parallel reality of follow-the-flag journalists
The corporate press has been savage in its treatment of Nicaragua, echoing and embellishing the distortions of the US State Department. If Nicaragua is indeed “a slow-motion horror movie” or “a hell,” as described by the follow-the-flag journalists, at least the sinners have universal free education and health care. What these State Department scribes fail to ask is, if the second poorest country in the hemisphere can afford these social welfare measures – really human rights – why can’t the richest?

It was striking how much the corporate press accounts of the election differed from what happened on the ground in Nicaragua. The Times, gleefully spun: “The streets of the capital, Managua, were also quiet, with little to show that a significant election was underway.” That is, the newspaper of record failed to acknowledge that the election was proceeding peacefully, and the usual Sunday afternoon calm prevailed. But the literally hundreds of thousands of celebrants spontaneously taking to the streets in Nicaragua after the polls closed got no coverage. Meanwhile the corporate press reveled about a few contras demonstrating in Costa Rica.

Yes, as the New York Times reported, the government “banned large campaign events.” The ban, which applied to all political parties, was due to the COVID emergency and not to suppress political expression. No, as the Times implied, “the only candidate is Daniel Ortega.” Six candidates stood for the presidency.

After its initial report, the Times had to retract their falsehood – they called it an imprecision – that there were only Sandinista party campaign advertisements in Managua. By my count, banners for the Partido Liberal Constitucionalista (PLC) were most prevalent.

RELATED CONTENT: All US Elections are Fraudulent; Shut Up About Nicaragua

Nicaragua exercises electoral sovereignty
Months before the elections, Biden had already pronounced the vote a fraud because he anticipated that the majority of Nicaraguans would vote their choice rather than Washington’s. The US imperiously implored the Nicaraguans to boycott their own elections, which was ignored by a respectable 65% of the electorate; a turnout similar to the vote that landed Biden in office, which was touted in the US media as a “record turnout.”

On election day, Biden, acting like a schoolyard bully, then threatened to use “all diplomatic and economic tools at our disposal” to punish Nicaragua for exercising its national sovereignty. This was no idle threat.

Nicaragua is already suffering from illegal US sanctions. The NICA Act of 2018, under the Trump administration, imposed sanctions, including blocking loans from international financial institutions controlled by the US. In August 2020, the Responsive Assistance in Nicaragua (RAIN) plan was revealed, which was a multi-faceted coup strategy by which the US contracted corporations to overthrow the Nicaraguan government. RAIN called for a “sudden, unanticipated transition” government to forestall what they admitted would otherwise be a Sandinista victory in a free election.

In a seamless handoff from the administrations of Trump to Biden, the RENACER Act, which passed Congress just days before the election and was signed into law immediately following, will visit even more misery on the people of Nicaragua. The Organization of American States, the European Union, and individual state “partners” of the US imperial project such as the UK and Canada have or are in the process of imposing additional hardships on the Nicaraguans.

Such is the price for holding what the Nicaraguans called their eclecciones soberanas, sovereign elections. Those who deny this right, disallow the Nicaraguan’s imperative to fight back against the imperialist assault.