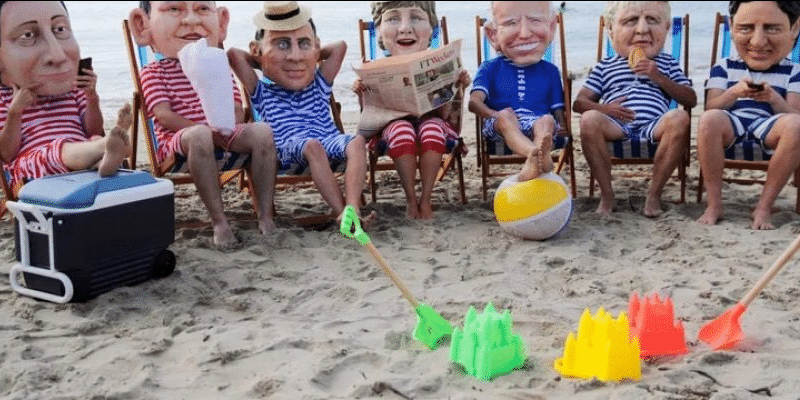 It requires major suspension of disbelief to consider the G7, the self-described democracy’s most exclusive club, as relevant to the Raging Twenties. Real life dictates that even accounting for the inbuilt structural inequality of the current world system the G7’s economic output barely registers as 30% of the global total.

Cornwall was at best an embarrassing spectacle – complete with a mediocrity troupe impersonating “leaders” posing for masked elbow bump photo ops while on a private party with the 95-year-old Queen of England, everyone was maskless and merrily mingling about in an apotheosis of “shared values” and “human rights”.

Quarantine on arrival, masks enforced 24/7 and social distancing of course is only for the plebs.

The G7 final communique is the proverbial ocean littered with platitudes and promises. But it does contain a few nuggets. Starting with ‘Build Back Better’ – or B3 – showing up in the title. B3 is now official code for both The Great Reset and the New Green Deal.

Then there’s the Yellow Peril remixed, with the “our values” shock troops “calling on China to respect human rights and fundamental freedoms” with a special emphasis on Xinjiang and Hong Kong.

The story behind it was confirmed to me by a EU diplomatic source, a realist (yes, there are some in Brussels).

All hell broke loose inside the – exclusive – G7 room when the Anglo-American axis, backed by spineless Canada, tried to ramrod the EU-3 plus Japan into an explicit condemnation of China in the final communiqué over the absolute bogus concentration camp “evidence” in Xinjiang. In contrast to politicized accusations of “crimes against humanity”, the best analysis of what’s really going on in Xinjiang has been published by the Qiao collective.

Germany, France and Italy – Japan was nearly invisible – at least showed some spine. Internet was shut off to the room during the really harsh “dialogue”. Talk about realism – a true depiction of “leaders” vociferating inside a bubble.

The dispute essentially pitted Biden – actually his handlers – against Macron, who insisted that the EU-3 would not be dragged into the logic of a Cold War 2.0. That was something that Merkel and Mario ‘Goldman Sachs’ Draghi could easily agree upon.

In the end the divided G7 table chose to agree on a Build Back Better World – or B3W – “initiative” to counter-act the Chinese-driven Belt and Road Initiative (BRI).

The White House, predictably, pre-empted the final G7 communiqué. A statement later retracted from their website, replaced by the official communique, made sure that, “the United States and our G7 partners remains deeply concerned by the use of all forms of forced labor in global supply chains, including state-sponsored forced labor of vulnerable groups and minorities and supply chains of the agricultural, solar, and garment sectors – the main supply chains of concern in Xinjiang.”

“Forced labor” is the new mantra handily connecting the overlapping demonization of both Xinjiang and BRI. Xinjiang is the crucial hub connecting BRI to Central Asia and beyond. The new “forced labor” mantra paves the way for B3W to enter the arena as the “savior” human rights package.

Here we have a benign G7 “offering” the developing world a vague infrastructure plan that reflects their “values”, their “high standards” and their way of business, in contrast to the Yellow Peril’s trademark lack of transparency, horrible labor and environmental practices, and coercion methods.

Translation: after nearly 8 years since BRI, then named OBOR (One Belt, One Road) was announced by President Xi, and subsequently ignored and/or demonized 24/7, the Global South is supposed to be marveling at a vague “initiative” funded by private Western interests whose priority is short-term profit.

As if the Global South would fall for this remixed IMF/World Bank-style debt abyss. As if the “West” would have the vision, the appeal, the reach and the funds to make this scheme a real “alternative”.

There are zero details on how B3W will work, its priorities and where capital is coming from. B3W idealizers could do worse than learn from BRI itself, via Professor Wang Yiwei.

B3W has nothing to do with a trade/sustainable development strategy geared for the Global South. It’s an illusionist carrot dangling over those foolish enough to buy the notion of a world divided between “our values” and “autocracies”.

RELATED CONTENT: Thousands March in Solidarity with Palestine Amid G7 Summit in London

We’re back to the same old theme: armed with the arrogance of ignorance, the “West” has no idea how to understand Chinese values. Confirmation bias applies. Hence China as a “threat to the West”.

We’re the builders of choice

More ominously, B3W is yet another arm of the Great Reset.

To dig deeper into it, one could do worse than examining Building a Better World For All, by Mark Carney.

Carney is a uniquely positioned player: former governor of the Bank of England, UN Special Envoy on Climate Action and Finance, adviser to PM Boris “Global Britain” Johnson and Canadian PM Justin Trudeau, and a trustee of the World Economic Forum (WEF).

His book – which should be read in tandem with Herr Schwab’s opus on Covid-19 – preaches total control on personal freedoms as well as a reset on industry and corporate funding. Carney and Schwab treat Covid-19 as the perfect “opportunity” for the reset, whose benign, altruistic spin emphasizes a mere “regulation” of climate, business and social relations.

This Brave New Woke World brought to you by an alliance of technocrats and bankers – from the WEF and the UN to the handlers of hologram “Biden” – until recently seemed to be on a roll. But signs in the horizon reveal it’s far from a done deal.

Something uttered by B3W stalwart Tony Blair way back in January is quite an eye-opener: “It’s going to be a new world altogether… The sooner we grasp that and start to put in place the decisions [needed for a] deep impact over the coming years the better.”

So here Blair, in a Freudian slip, not only gives away the game (“deep impact over the coming years”, “new world altogether”) but also reveals his exasperation: the sheep are not being corralled as fast as necessary.

Well, Tony knows there’s always good old punishment: if you refuse the vaccine, you should remain under lockdown.