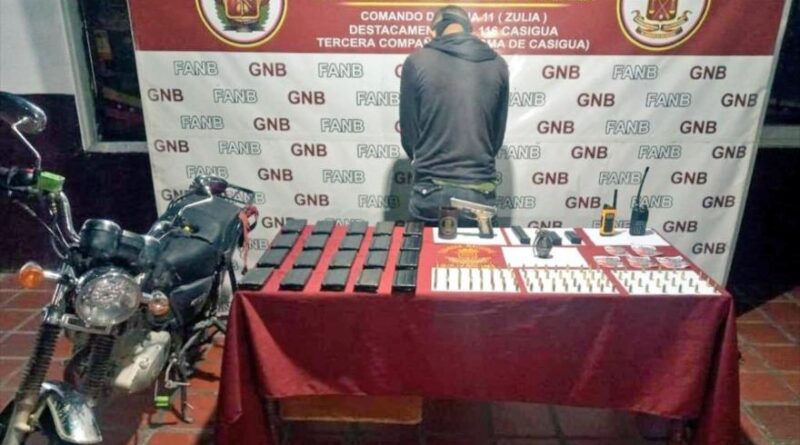 This Thursday, January 6, Venezuelan authorities reported the arrest of a terrorist drug trafficker from Colombian paramilitary and seizure of weapons and explosives from him near the border with Colombia.

It was further informed that the FANB seized weapons and explosives that the terrorist had in his possession, to be used “for drug trafficking purposes.”

Hernández Lárez has not revealed further details in this regard. However, in one of the photographs attached to the aforementioned tweet, the arrested man can be seen from behind, and in a place with the identification of the Zone 11 Command, in Casigua del Cubo, Jesús María Semprum municipality of Zulia state, in the western part of Venezuela, approximately 200 km north-east of Arauquita (Arauca), Colombia.

The capture of this man occurred amidst the escalation of violence during January 2-5 in several municipalities of the Colombian department of Arauca, on the border with Venezuela, which caused the death of 27 people and the displacement of 50 families.

Caracas accuses Bogotá of training “mercenaries and terrorists” to enter Venezuela in order to overthrow the government of President Maduro, who, facing such a situation, has issued the orange alert several times on the Colombian-Venezuelan border and has ordered a military deployment in the zone to defend Venezuela.

Maduro’s administration has also denounced the lack of action from authorities on the Colombian side of the border, which allows the spread of paramilitary drug trafficking groups that fight for the control of this conflict zone and the key drug routes. Last year, in March and April 2021, a dozen Venezuelan soldiers died at the hands of these groups along with a larger number of Venezuelan civilians.

The Bolivarian National Armed Force continues to reiterate that it will defend the country in the event of attacks by Colombian paramilitary groups.

Featured image: The FANB of Venezuela has arrested a member of a Colombian paramilitary drug-trafficking group, carrying weapons and explosives used for drug trafficking purposes, in the border with Colombia. Photo: GNB