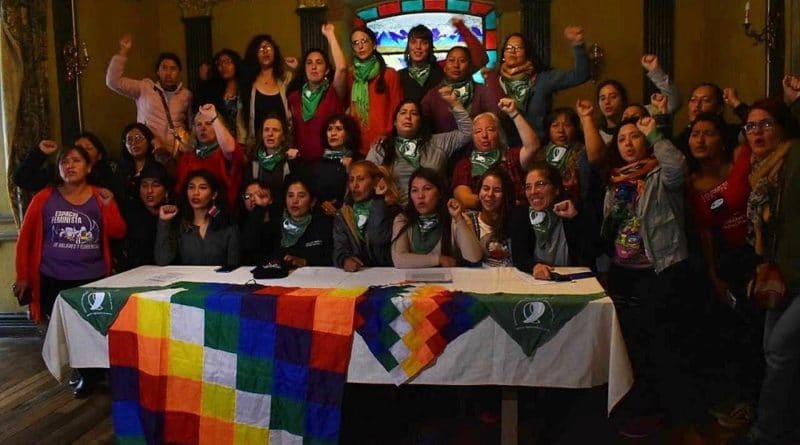 A delegation of 35 Argentine feminists, social and human rights activists travelled to Bolivia this March 8, on International Working Women’s Day to extend their solidarity with Bolivian women and people against the coup d’état on November 10, 2019 that ousted the democratically elected progressive president Evo Morales.

During their two-day-stay in Bolivia, the Argentine delegates, along with 30 Bolivian feminists, carried out several interviews in prisons and hospitals, as well as in the homes of Bolivians with the aim of collecting testimonies and revealing human rights violations and state crimes, committed by the de-facto government since November 2019.

On March 9, the plurinational delegation of Argentine and Bolivian feminists, through a press conference, internationally denounced that the coup in Bolivia was “racist, patriarchal and fascist.”

“There is intimidation, rape, racist and sexual harassment, violation and violence. Most of the women who were raped were indigenous women, there are complaints that their braids were cut and there are constant threats against the indigenous, peasant and working population,” said the members of the delegation.

The delegates informed that the visits to prisons showed that there was systematic abuse and violation of due process. They said that “political prisoners have no guarantees since torture was evident in places of detention and prisons.”

They also said that “the coup against the people continues with repression,” and that “the events that occurred since the coup constitute crimes against humanity.”

RELATED CONTENT: Bolivia: Over 147,000 Voters Disqualified From Next Election

In this regard, the delegates demanded that bodies of international justice intervene in the country to investigate the Sacaba and Senkata massacres and put the policemen on trial, who used excessive force to repress peaceful social protests, killing 36 people and injuring hundreds.

Finally, they denounced ahead of the general elections scheduled for May 3 that “there is a political ban.” They called on the feminist movements of the world to speak out against the coup in Bolivia.

In addition, on March 9, Argentine activists also took part in a massive women’s march against the coup and in defense of democracy. The delegates marched along with hundreds of Bolivian women from the city of El Alto to the country’s capital, La Paz. During the demonstration, feminists denounced the actions of the country’s interim government, led by far-right Jeanine Añez, and demanded respect for Wiphala, the Indigenous flag and a symbol of plurinational character of the Bolivian state. The protesters displayed posters against the conservative self-proclaimed president and her administration. “Añez machista, you’re not a feminist”,“Feminism will be anti-racist or it won’t exist”,“Justice for the victims of Sacaba and Senkata massacres”, “Freedom for political prisoners”, etc.

The march was called for by various women’s and Indigenous organizations as a part of the International Working Women’s Day.

Featured image: The plurinational feminist delegation denounced violation of human rights after the coup in Bolivia in a press conference on March 9. Photo: Marcha Notícias