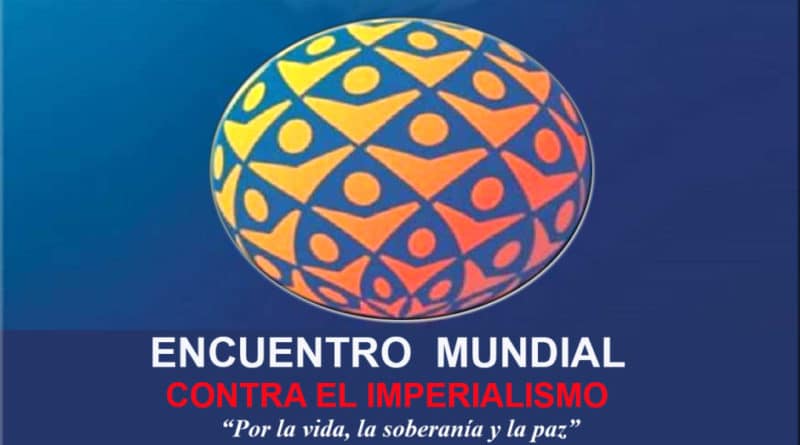 Representatives of social and political movements from the five continents will participate in the World Anti-Imperialist Meeting that will start this January 22 in the capital of Venezuela.

Under the slogan “for life, sovereignty and peace” the attendees and participants in the meeting will denounce the neo-liberal, anti-imperialist policies promoted by the United States and its allies.

“This is a world meeting where we have invited more than 892 delegates, and some have been in the country since Saturday,” said the member of the National Directorate of the United Socialist Party of Venezuela (PSUV), Gerardo Marquez

Márquez said that during the meeting they will work in thematic tables where topics such as the aggressions of imperialism in the 21st century will be addressed, the search for a sustainable economic model, neoliberalism versus social inclusion, the experiences of progressive governments in the world, among others.

Diosdado Cabello, PSUV First Vice President, was in charge of the opening and in his remarks mentioned the lack of relevance of the photo op sponsored by the US that is taking deputy Guaido on a tour of several countries.

Cabello highlighted the importance of solidarity among the countries resisting US hegemony and also among the peoples resisting neoliberalism. In that spirit he made a special mention of General Qassem Soleimani, which was followed by a standing ovation by more than 250 delegates from 51 countries.

Diosdado Cabello offers a minute of applause in honor of General Soleimani, along with international delegates from 51 countries, at the World Meeting Against Imperialism

RELATED CONTENT: US License to Venezuelan Central Bank Might Not Be What it Seems (Interim Central Bank?)

The representative of the PSUV stressed that a great battle is taking place in Venezuela against interventionist pretensions, which has served as an example for other nations of the world that are determined to defeat neoliberalism.

The anti-imperialist meeting will culminate next Friday, January 24 and is part of the XXV agenda of the Sao Paulo Forum that was held in Caracas last July. On that occasion, attendees evaluated the effects of neoliberalism.

Sabotage against the international meeting

Earlier Tania Diaz, PSUV head of communications and activism, expressed in a press conference that despite the international blockade and sabotage, the meeting was going to be held. She mentioned that of more than 1,200 international participants only a small percentage manage to get into Venezuela.

Several international delegates mentioned that airlines put a lot of restrictions on the travel of other delegates, a practice that the US regime has implemented in recent months to sabotage the Bolivarian revolution.