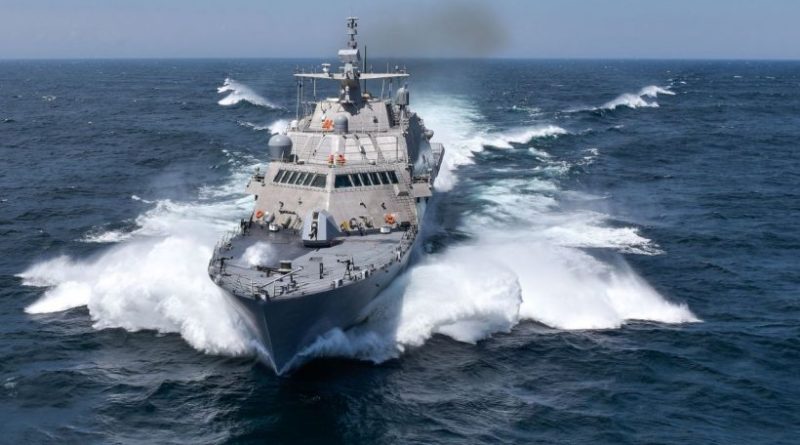 Before the Coast Guard ship Serreta, Gabion class of the Venezuelan Navy, intercepted the USS warship Detroit from the United States, the latter turned northward after it sailed about 26 miles off the Venezuelan coast for approximately seven hours.

On Tuesday, January 21, there were reports of USS Detroit being close to the coast of Venezuela, creating high expectations for the opposition base that support a foreign armed intervention against the country, after Juan Guaidó fled to Colombia to meet with the president Iván Duque and Mike Pompeo, Secretary of State of the Trump Administration, in the framework of a so called anti-terrorism summit sponsored by Washington.

After the activity of the USS Detroit was detected, the Venezuelan ship Serreta pursued this ship near the Venezuelan coast, maintaining a prudential distance between navigation waters with international jurisdiction and the Venezuelan area.

Subsequently, both the USS Detroit and the Serreta took their route of origin; towards the north the first, towards La Guaira the second.

The Military Zone site reported in December 2019 that the USS Detroit “released moorings at the Mayport Naval Station, to join the area of responsibility of the Southern Command where it will serve in support of the MARTILLO multinational operation” on October 31.

RELATED CONTENT: President Maduro: Mike Pompeo is a Fantasist Who Lives on Lies

“For the tasks against illicit traffic in waters of Central and South America in the framework of the MARTILLO operation, the USS Detroit will have its surface combat package which will be significantly reinforced by its embarked air component, which is composed of a Sea Hawk MH-60S helicopter and two MQ-8B Fire Scout VANT assigned to the Sea Combat Squadron (HSC) 2 ‘Sea Knights’ Helicopter. The crew, consisting of 90 people, will perform rotations every 4-5 months and will be supported by a US Coast Guard detachment.

“The USS Detroit will not be limited to only control tasks but without exchanges with various navies in the region, as is usually the case in these types of operations. According to the provisions of the US Navy, in early 2020, a second LCS will be deployed, in this case the USS Little Rock LCS-9, a unit also belonging to the ‘Freedom’ class. “

The route of the US ship could be connected with military intelligence work, as the South Command has previously done by air, violating Venezuelan airspace several times during 2019, thus denounced by the state led by Nicolás Maduro.

From the latest Pompeo’s statements, threatening the future overthrow of the Chavista government in Venezuela, it could also be a psychological operation, given the expectation expressed by those who advocate a US brand military invasion.