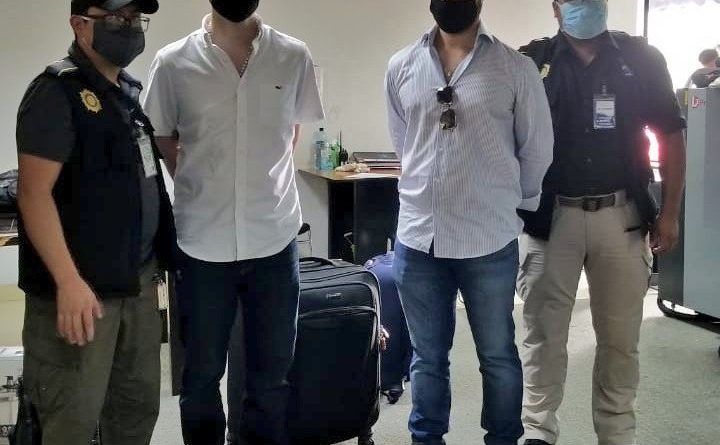 The brothers Luis Enrique and Ricardo Alberto Martinelli Linares, sons of former Panamanian President Ricardo Martinelli, were detained this Monday in Guatemala for money laundering and are requested for extradition to the United States, according to official sources.

Both brothers intended to leave Guatemala and go to Panama on a humanitarian flight when authorities detained them, according to the spokesman for the National Civil Police, Jorge Aguilar.

Aguilar explained that the two brothers, of Italian and Panamanian nationality, are accused of “conspiracy to commit money laundering involving specific activity according to the United States criminal code.”

The Guatemalan security forces transferred the two brothers to the Tower of Courts, in the center of Guatemala City, for their first statement and to inform them of the reason for the arrest.

Ricardo Martinelli Linares, 40, and Luis, 38, had been missing for approximately twelve months, and were arrested at La Aurora International Airport, where they were to take a flight back to their country, Aguilar said.

The brothers reportedly received bribes for $ 55.8 million from Odebrecht to expedite payments to the company, according to the allegations of André Rabello, who led the operations of the Brazilian firm in Panama for several years, as revealed by the Prosecutor’s Office.

RELATED CONTENT: The Three Political Fronts where Chavismo has Taken the Offensive in 2020

Both are also implicated in the “Blue Apple” scandal , a plot similar to Odebretch’s but with Panamanian companies.

The Guatemalan police spokesman said that the capture of Martinelli’s two sons was carried out after identifying them “through a police unit called the “Centro Antipandillas Transnacionales”, a police unit that has a Central American connection and also one with international agencies.”

According to the Ministry of the Interior, the two brothers have “an arrest warrant from the multidisciplinary criminal first instance court of Guatemala on June 3,” with an extradition order from the United States, signed by Judge Shirlly. Johanna Maldonado Velásquez on July 3.

The authorities explained that “these people were subjected to surveillance and monitoring work since June 30 of this year, when they received classified information about them leaving the country,” supposedly heading to Panama.