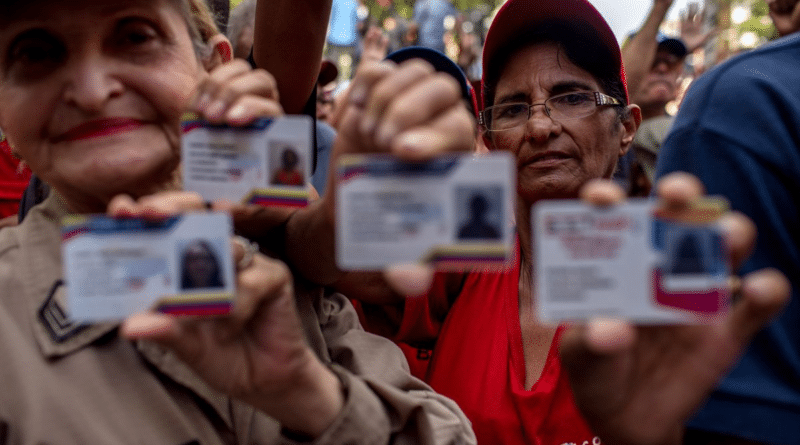 The crisis, which is not only conjunctural or regional but systemic and global, has been catalyzed by the pandemic that branches from the geopolitical to the everyday, passing through the national; hence, Venezuela is affected, but also driven, by tensions of all kinds, claiming the right to be and exist as a political referent.

Trump’s appearance in the United States presidency has exposed some fractures in the globalist elite; one of them is the crisis of consensus between Washington and the European Union (EU). This last pole has been beaten by the Trump Administration in different decisions and statements where the magnate has made clear the subordinate role of the old continent before the global concert that the United States intends to lead.

Different actors in the European conglomerate have stated that the global leadership of the United States is coming to an end; the last was German Chancellor Angela Merkel. This happened the same week that the EU joined Trump’s policy against Venezuela and decided to sanction 11 Venezuelans for different political activities and trends.

In response to the interventionist decision, the Venezuelan government decided to expel the EU ambassador, Isabel Brilhante Pedrosa, from the national territory. “What a shame that 27 countries that are an economic power are on their knees to Donald Trump and his erratic policies of aggression on Venezuela,” said President Nicolás Maduro after the EU decision was announced.

This provoke a reaction from the High Representative for Foreign Affairs, Josep Borrell, the same one who last April highlighted the end of the United States’ leadership in the world and pointed out that the balance of power is already tilting towards Asia, especially after the terrible US handling of the coronavirus outbreak.

On the domestic front, anti-Chavista sectors of the so-called G4 (Accion Democratica, Primero Justicia, Voluntad Popular and Un Nuevo Tiempo) have a dilemma between participating in the political struggle or following the anti-political path, so that sectors of Democratic Action (AD) and Primero Justicia (PJ) filed two constitutional amparo actions that were admitted by the Constitutional Chamber of the Supreme Court of Justice (TSJ).

In both cases, the Judiciary appointed ad hoc executive boards for both political parties, allowing them to legitimize themselves through internal processes and go to the legislative elections on December 6, called by the brand-new National Electoral Council (CNE).

The same TSJ appointed, as it has done other times, the CNE board that announced the special rules for the parliamentary elections of the period 2021–2026 through its new president Indira Alfonzo Izaguirre.

In this regard, the anti-Chavista sector controlled by the United States and its satellites, which does not recognize the TSJ or the CNE, is left out of the Venezuelan political metabolism in which elections, dialogue and political participation in daily life are ways to settle differences in democracy.

The blockade against Venezuela, led by the United States, has made more evident the fissures between the hegemonic blocs that have tried to apply the concept of “tabula rasa” to the world through institutions such as the International Criminal Court (ICC).

Venezuela, with almost 10 billion dollars blocked by the United States and Europe, in addition to 31 tons of gold in the United Kingdom, went to the ICC last February to denounce the United States government for sanctions against its economy and it called on the chief prosecutor of the court, Fatou Bensouda, to open an investigation against Washington for crimes against humanity caused by unilateral coercive measures, misnamed sanctions, against the Venezuelan people.

Said measures by the United States have as a fundamental victim the “Venezuelan civilian population that has died, that has suffered disease and obstacles to their diet,” explained Venezuelan Foreign Minister Jorge Arreaza. Last June, Foreign Minister Arreaza himself signed a complaint to denounce unilateral coercive measures in the midst of the pandemic.

RELATED CONTENT: Coffin in the Middle of the Street: Covid-19 Drama in Bolivia

Rather than “tabula rasa,” the United States has wanted to impose “the law of the funnel” by failing to recognize this global body, by criticizing the role of the ICC, established in 1998 and running since 2002. Even former President George W. Bush (2001–2009) encouraged countries to avoid it and threatened sanctions against those who support it.

Barack Obama, successor to Bush Jr., although less decisive, also did not have the United States adhere to the Rome Statute (creating the ICC). Trump has penalized with sanctions and a ban on entry into the country for any ICC official investigating US troops in order to curb a war crimes case in Afghanistan under investigation by the ICC.

Borrel has defended the ICC calling the measures “unacceptable” and urging the United States “to reverse its position.” The EU’s position is highly anticipated if the ICC decides to open a criminal investigation against those who block and retain the assets that the Venezuelan population requires to face the health threat of the coronavirus.

Threats and opportunities have allowed the Chavista offensive to be constant and, not without weaknesses, to set in motion a transformation that neutralizes the declared war by the transnational elites.

In coordination with the United States, Colombia has served as a platform to besiege Venezuela, which has required forceful actions at the military and social levels, even in the midst of the pandemic.

Decreeing a state of national alarm, when the UN called for a world ceasefire due to the pandemic, since last March the Bolivarian National Armed Forces (FANB) has deactivated paramilitary cells of the Los Rastrojos narco-paramilitary band. In several operations, it has seized hundreds of kilos of explosives, weapons, and evidence of plans and procedures to attack military units, an airport, a passenger terminal, and hospital facilities.

Likewise, people from Colombia have been detained who evade sanitary controls and eventually become Covid-19 vectors, increasing domestic infections. Different authorities have denounced this as encouraged by Colombian security forces and paramilitary groups.

The Venezuelan government strengthens the development of the Plan of the Fatherland by supporting social investment and avoiding the attacks and problems caused by the Anglo-empire in general and the pandemic as a conjuncture. Even though coercive measures have sought to harm the fight against structural poverty, a well-finished product of capitalism, Chavismo is advancing in the implementation and deepening of effective social policies.

Specifically, efforts have been made to protect the population in the fight against Covid-19 through house-to-house screening and free treatment of infected patients with the humanitarian support of China, Cuba and Russia.

Food security is also sought through the deployment of the Local Food and Production Councils (CLAP) and the distribution of food boxes to 7 million families (monthly).

The allocation of stimulous checks that seek to protect workers through the Homeland System has also been kept. Last Wednesday, July 1, Maduro approved the delivery of 33,682 new pensions to keep 100% coverage for the elderly.

The state of global alarm has not stopped the onslaught of the corporatocracy that governs the United States and its satellite countries against Venezuela. Faced with the enemy push, the Venezuelan government has taken the initiative defining new action frameworks that allow Chavismo to take the pulse of recent times.

Featured image: The popular mobilization of women and men in civic-military union and the measures of protection and social promotion are the engines of Chavismo. Photo: Archive