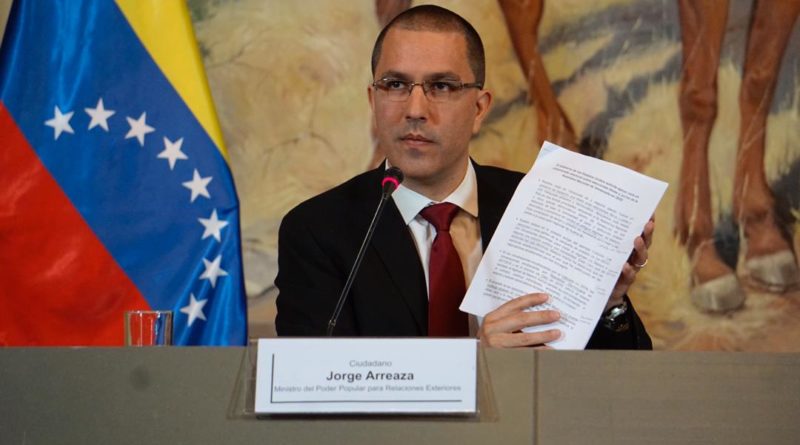 The Foreign Minister of the Bolivarian Republic of Venezuela, Jorge Arreaza, ratified the commitment and willingness of the constitutional government of President Nicolás Maduro to promote political dialogue with all sectors of the opposition for the peace of the country, this in the face of the interventionist campaign that is sustained by the administration of the United States.

In statements at the headquarters of the Ministry of Foreign Affairs, in Casa Amarilla, Caracas, this Thursday, Arreaza showed a document signed by the US government that reveals new interventionist strategies against Venezuela and also, among other things, discredits the dialogue processes promoted by the constitutional government of President Nicolás Maduro.

“The statement sent by the US mentions that it is necessary to seek a transitional government, supporting the National Assembly and economically pressuring the government of Nicolás Maduro,” the text presented by the chancellor said.

“The statement sent by the US to several counties worldwide mentions that it is necessary to seek a transitional government, support the National Assembly and economically press the government of Nicolás Maduro to destabilize it. The US wants to attribute the dialogue processes to itself, supposedly achieved through economic blockages and sanctions,” said Arreaza.

He also indicated that in the statement the US government discredits the National Dialogue Table, convened by President Maduro, and classifies it as “an entity created by marginal politicians in Venezuela.” However, Arreaza recalled that this Dialogue Table “is yielding results and agreements are being reached,” he said.

Finally, the foreign minister recalled that President Maduro has made more than 500 calls for dialogue and peace, despite opposition sectors that refuse to engage and indicated that if mechanisms such as Oslo, Norway must be retaken, they will be resumed, all for the well-being of the Venezuelan people.