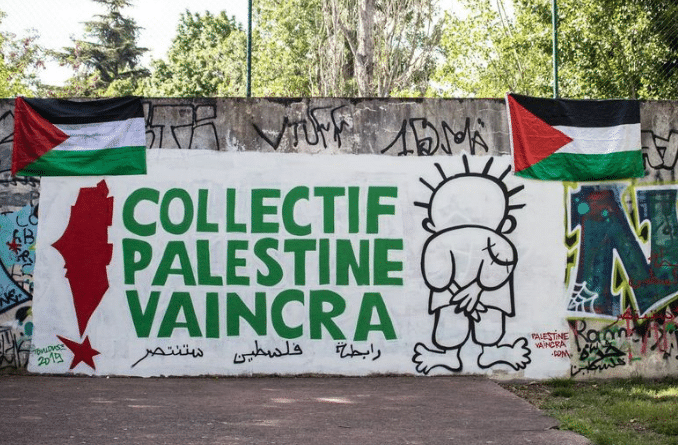 France’s Interior Minister announced in a tweet on Thursday that he is banning two Palestine solidarity organizations at the request of French President, Emmanuel Macron.

France's Interior Minister announced that he is banning two Palestine solidarity organisations at the request of French President, Emmanuel Macron.
Gerald Darmanin tweeted yesterday that he will move to dissolve Palestine Will Win and Palestine Action Committee. pic.twitter.com/Z3PRNXYwnB

“Under the cover of supporting the Palestinian cause, the government accuses the groups of promoting hatred of Israel,” French newspaper, Europe 1, reported.

Established in 2019, Palestine Vaincra is accused by the government “of calling for hatred, discrimination and violence.”

Darmanin added that France is also accusing it of ties with the Popular Front for the Liberation of Palestine, a group banned by the Israeli occupation.

This comes after a series of “dissolutions” imposed by the French State, including an order to dissolve the Collective Against Islamophobia in France, as well as various leftist and anti-racist organizations.

French Minister of the Interior Gérald Darmanin, says he's intending to dissolve the Collectif Palestine Vaincra and another pro-Palestinian organization at the request of French president Emmanuel Macron. @GDarmanin pic.twitter.com/SjzhVKar4t

In response, Palestine Vaincra denounced the move as “an attack against the solidarity movement towards Palestine and all anti-racist forces.”

In a statement, its spokesperson, Tom Martin, said, “We condemn this announcement in the strongest terms and are preparing a legal and political response.”

This type of criminalization reflects the French state’s ongoing attempts to cover up its crimes of colonialism throughout the region and its complicity in Israeli war crimes. #SolidaritéCollectifPalestineVaincra https://t.co/UjZTLkUkuD

Palestine Vaincra is part of Samidoun, the Palestinian Prisoners Solidarity Network, designated by Israel as a Popular Front for the Liberation of Palestine affiliate.

An online petition has been created by Palestine Vaincra calling out Darmanin and President Macron for their support to Israeli apartheid and for public support against the criminalization of the solidarity movement with Palestine.