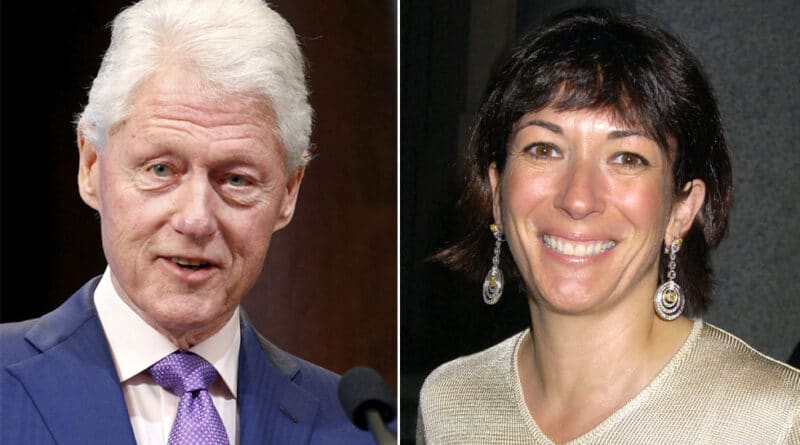 Two previously unknown trips shared by Ghislaine Maxwell and Bill Clinton have been revealed, and journalist Vicky Ward has described the relationship between the two as an “escape” from the late Jeffrey Epstein.

On the ‘Chasing Ghislaine’ podcast, Ward alleged this week that Maxwell joined Clinton on two foreign trips in the early 2000s and was considered “just as important” to his staff as Epstein.

Clinton reportedly used Epstein’s infamous Lolita Express plane – which was said to jet some people for sexual encounters with underage women – to visit Japan, Taiwan, and China in 2005. He also flew by private jet to India in 2003. Maxwell joined him on both trips and was treated as a member of the former president’s team.

It had previously been revealed that Clinton took trips on Epstein’s Lolita Express in the early 2000s, a period when authorities would later claim Epstein was running a sex-trafficking ring.

Citing sources close to Clinton, Ward, who has covered Epstein for decades, said it was not just Epstein and Clinton getting close in the early 2000s, but also the former president and Maxwell. Maxwell, Ward claims, used her tips with Clinton during this time as an “escape” from her unusual relationship and “sick partnership” with Epstein.

“Remember, Clinton’s post-presidency was an exciting, very attractive place to be. He and an entourage went on fascinating trips to Europe, to Asia, to Africa and he met with extremely interesting people,” Ward said.

Clinton was traveling at the time, promoting schemes to make AIDS and HIV medicine more readily available and affordable.

“She was very excited by what she was about to do. And she told me that she was off to see Bill Clinton, and that-that seemed to be a leitlight motif in her conversation for quite a long time,” journalist and Maxwell associate Christopher Mason told the ‘Chasing Ghislaine’ podcast, released through Audible Originals.

Ward also reported that Maxwell was considered necessary in soliciting funds from billionaire Epstein. Maxwell was often whom Clinton and others would go to when asking for Epstein donations, including an apparent six-figure amount that helped create the Clinton Global Initiative.

Maxwell is currently awaiting trial for sex-trafficking charges, related to her relationship to Epstein. She has pleaded not guilty, and her trial is set to begin in November.

There has been much speculation about Maxwell and Clinton’s relationship. The former president has denied any knowledge or involvement in Epstein’s crimes, but some have suggested his connection to Epstein runs deep, especially through Maxwell.

In ‘A Convenient Death: The Mysterious Demise of Jeffrey Epstein’, journalists Alana Goodman and Daniel Halper went so far as to claim Clinton and Maxwell were at one time having an affair and Clinton visited her Manhattan residence multiple times. A spokesperson for Clinton in the past called the affair allegations a “total lie.”

Epstein died by apparent suicide in prison while awaiting trial in 2019.