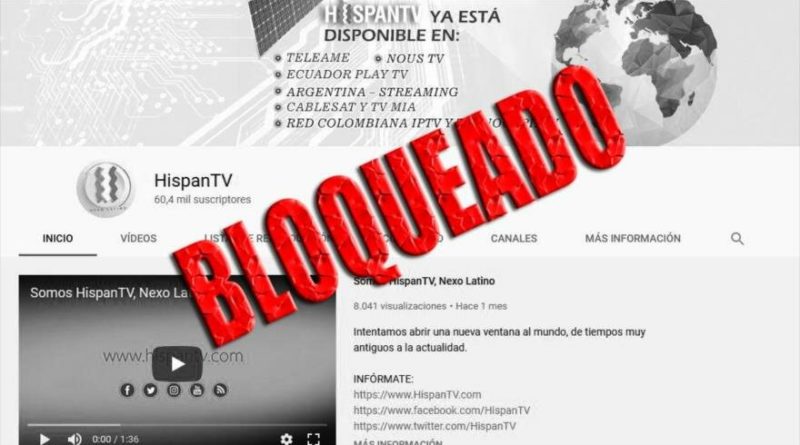 Due to this new restriction, the two media cannot, for the moment, post new content. Google justifies its measure by indicating that it found rule violations, although it does not offer details.

Both HispanTV and Press TV have repeatedly been subject to media censorship. This while in recent years they have had a great reception in social networks and thousands of people prefer these alternative media for their factual reporting and for being the voice of those who don’t have one.

The last time the US company avoided allowing access to the aforementioned chains was in August. The measure unleashed protests from several figures in Iran, who struck out at the offenses against the Persian media as a flagrant “violation of freedom of expression and the free movement of information.”

The company FireEye, Google’s main associate in computer security, acknowledged in a previous report that the blockade against Iranian media responds to its growing influence in the United States, the United Kingdom and Latin American countries, through social networks.

According to the director general of HispanTV, Dr. Ali Ejarehdar, technology companies such as Google act in accordance with the “hostile” policies of the United States , which seek to “silence the voice of truth”.

In this regard, the State Department of the United States requested, at the end of November, that the companies Facebook and Twitter suspend, eliminate or block the accounts of the Leader of the Islamic Revolution of Iran, Ayatollah Seyed Ali Jamenei, and the president of the Persian nation, Hasan Rohani.

This request did not take long to materialize, as Facebook eliminated the Arabic-language account of Ayatollah Jamenei last Friday, which had more than 100,000 followers.

The Islamic Republic attributes such illegal behaviors to attempts by the West to silence those voices that spread the truth and reveal their fallacies.