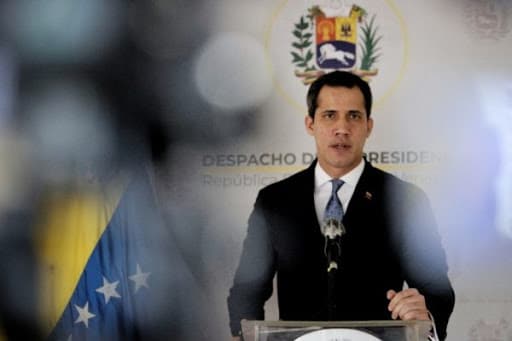 According to information published by the US news agency Bloomberg, “an opposition MP with long experience” confessed – on condition of anonymity – that the leadership of Juan Guaidó ended with the latest failure of the so – called Operation Gideon.

As reported by the US media, this evaluation of Guaidó is shared by an important group of anti-Chavista “parliamentarians,” who have even suggested to the Donald Trump regime that it establish “new negotiations” with the government of Nicolás Maduro.

The growing stance within the same seditious group that revolves around Guaidó and that created a false parliament last January, when they lost the presidency of the National Assembly that is now led by deputy Luis Parra, while an imminent legislative election is looming and the radical and minority sector of the opposition has no chance of winning.

Bloomberg also highlights that according to “some deputies”, at this time it is more important to address the situation of the coronavirus pandemic and the shortage of supplies generated by the US blockade.

The newspaper says that the anti-Chavista politicians believe that if they connect to these issues they could regain the confidence of Venezuelans.

The piece quotes David Smilde, an expert in Venezuela at the University of Tulane, who considered that Guaidó is going through his worst moment.

“The failed (mercenary) incursion definitely erodes Guaidó’s leadership both nationally and internationally. His approval levels were already declining steadily in recent months as he has been unable to deliver on the swift transition he promised,” Smilde said.

Anti-Chavista journalist Francisco Poleo, vice president of the newspaper “El Nuevo País”, mentioned on his twitter account that the former governor of the state Miranda Henrique Capriles was the one who spoke to Bloomberg.

“Henrique Capriles met with Juan Guaidó and has withdrawn his support. He has requested to be appointed head of the opposition and be the next presidential candidate. He made the same demand to the United States government. The White House said support for Guaidó is not negotiable. The one talking to Bloomberg was Capriles,” he wrote.

Capriles Radonski is the head of Primero Justicia (PJ), the most important party in the G-4 (hard core anti-Chavista political group supporting Guaidó) and in principal the most ideologically aligned with him alongside Voluntad Popular.

“A break of Primero Justicia with Guaidó and Voluntad Popular might provoke Accion Democratica and Un Nuevo Tiempo, the other political parties within the G-4, to find new leadership soon,” a political analyst said to Orinoco Tribune.