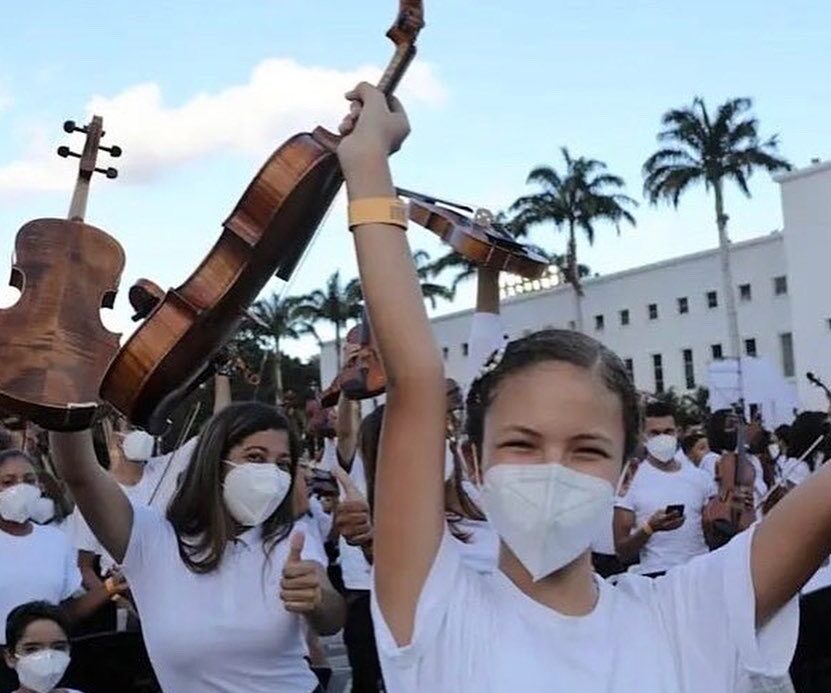 More than 12 thousand musicians from Venezuela's El Sistema while breaking the world record for the biggest performing orchestra. File photo.

With a gala held this Saturday, November 20, at the headquarters of El Sistema, the official announcement of the results of the record attempt was made, as Venezuela’s National System of Youth and Children’s Orchestras and Choirs of Venezuela (El Sistema) obtained the Guinness World Record for “The Largest Orchestra in the World.”

This record was held until Saturday by Russia, where in 2019, 8,097 musicians performed the Russian national anthem. Now the record belongs to Venezuela, where 12,096 musicians from El Sistema, in a new feat, performed various pieces at the Military University of Venezuela. The piece chosen to participate in the Guinness challenge was the Tchaikovsky’s Slavic March, and the Guiness supervisory committee observed the recording in detail for more than 5 minutes and approved that it met the committee’s requirements.

Saturday’s gala was attended by the Orchestra as well as the Venezuelan Minister for Information Freddy Ñáñez and the Minister for Culture, Ernesto Villegas, and the Russian ambassador to Venezuela, Sergey Melik-Bagdasarov, as special guest. The sisters of Maestro José Antonio Abreu, who had been associated with the orchestra until his passing in 2018, unveiled the Record certificate.

For his part, the Russian ambassador to Venezuela, Sergey Melik-Bagdasárov, recognized the work done by the artists of El Sistema, celebrated this new record previously held by Russia, and ratified that both nations are going together in the correct direction. “For me, as the Russian Ambassador, it is a great honor to attend this historic event,” he said.

In the gala, the ensemble of Petare performed the piece Amalia of Francisco Armando Aguirre, under the direction of Andrés David Ascanio. It was followed by the Simón Bolívar Symphony Orchestra performing Danzón Number 2 by Arturo Márquez, again conducted by Andrés David Ascanio. In addition, there was a performance by the Alma Llanera Orchestra, and a performance of Fuga con pajarillo, by Aldemaro Romero.

The gala started with an interpretation of English language pop music mix of hits, starting with “It’s hard to say I’m sorry” and “You’re the inspiration” by Chicago, “Jump” by Van Halen, “Take on me” by A-ha, “Rosanna” and “Africa” by Toto, “Don’t stop belivin” by Journey, “Uptown Funk” by Mark Ronson, “Treasure” and “I look too good to be alone” by Bruno Mars, “I want to break free” and “Don’t stop me now” by the legendary British band Queen.

Finally, the orchestra interpreted the Slavic March, by Pyotr Ilyich Tchaikovsky, the same piece evaluated at the concert on November 13 to achieve the Guinness record as the largest orchestra in the world.

For the executive director of El Sistema, Eduardo Méndez, “it is not a necessary milestone, but it does seem like something nice for us and for the country to be certified as a world reference. A record is an achievement that goes down in history. So that is why it was important to make this possible.”

For his part, Minister Ñáñez thanked each of the members of the orchestra and El Sistema, producers and other personnel who participated in this great feat. “On behalf of the President of the Republic, Nicolás Maduro Moros, and on behalf of the Venezuelan men and women who love this land, I come to say thank you,” stated the minister. “Thank you, boys and girls, for having reminded the world how beautiful, how brave and how dignified Venezuela is. We are the largest orchestra in the world. Thanks.”

President and Vice President congratulate
The President of Venezuela, Nicolás Maduro, celebrated Venezuela’s entry into the Guinness World Records as the World’s Largest Orchestra, with these words: “What a pride! The System of Youth and Children’s Orchestras and Choirs of Venezuela has achieved it, we are a Guinness Record holder as the Largest Orchestra in the World. Congratulations to the over 12,000 musicians, and the directors. They have given our country tremendous joy.”

For her part, the Venezuelan Vice President Delcy Rodríguez also praised the achievement of El Sistema for being officially recognized by the Guinness World Records as the Largest Orchestra in the World.

“Long live Venezuela!” she tweeted. “We are great, made of the glory of our Liberators! Today the whole country celebrates, those of us who are here, those who have left, we are proud of the Simón Bolívar orchestra system! Venezuelan youth sound deep in the soul of the country!”