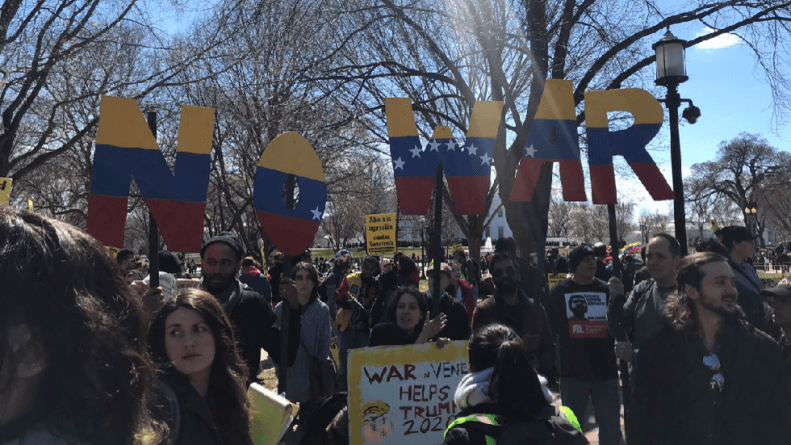 Hundreds of protesters are gathering in Washington DC to demand “No coup! No war! No sanctions!” on Venezuela, and show support for Venezuela President Nicolas Maduro against regime change efforts.

Today in D.C., thousands marched against U.S. imperialism in Venezuela and in support of Maduro & the Bolivarian Revolution

A large sea of demonstrators met at Lafayette Park for a march on Washington Saturday afternoon to show opposition to the Trump administration’s effort to overthrow Maduro and replace him with opposition figure Juan Guaidó, who has declared himself president with the support of the US, Canada, many European nations and other leaders.

Beautiful crowd today in the belly of the beast, where citizens have gathered to affirm our respect for Venezuela’s sovereignty and independence & demand an end to economic war. With 40 million people living in poverty, we need humanitarian in the US! #handsoffvenezuela pic.twitter.com/I7CuuN9TQh

.@medeabenjamin Calling us to stand with the people of #Venezuela join @codepink rally at #whitehouse or tell your Congressmember #handsoffvenzuela at https://t.co/u5n4YVnKcv… #nocoyp #peace pic.twitter.com/Nvf0yga5Qy

@medeabenjamin “the spirit of revolution is spreading all through Latin America” #Handsoffvenezuela pic.twitter.com/72ywVvlc7j

A Venezuelan activist from the @answercoalition talks about the anti-colonial struggle of Venezuela at the #HandsoffVenezuela rally pic.twitter.com/6LqZevxvla

About to give the @Blacks4Peace statement on behalf of @ajamubaraka at #HandsoffVenezuela rally in DC because Ajamu is stuck in #Venezuela. pic.twitter.com/d0esjGcH2o

Ciara Taylor at Popular Education Project: “we will not be complicit, there will not be another Iraq!” #HandsOffVenezuela pic.twitter.com/ns2kXupKzh

The demonstrators are protesting against a policy that repeats previous regime change efforts in Iraq, Libya and Syria, and are rejecting the so-called ‘Monroe Doctrine’ the US has previously employed across Latin America.

The message to the White House is clear: NO WAR ON VENEZUELA. pic.twitter.com/VlPxsOAunF