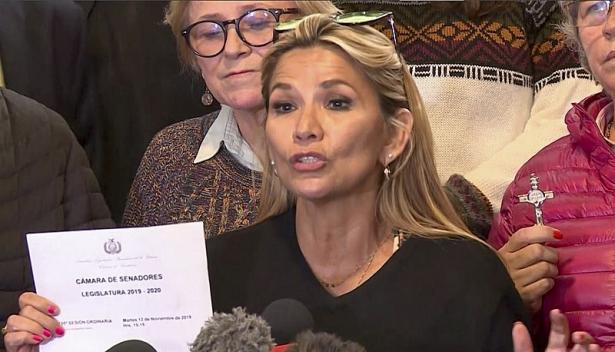 Discredited, divided, and with an election looming, Bolivian President Jeanine Añez’ coup government is peddling conspiracy theories about enemies in the media, government and civil society, all designed to widen the net of adversaries to persecute.

When I reported on Bolivia last November, the military had recently massacred dozens of citizens, mostly of Aymara descent. Friends of mine in La Paz were in hiding or exile. The coup government of Jeanine Añez was waging open war against journalists and members of (Movement for Socialism) MAS, Evo Morales’s party, which had governed Bolivia since 2006. When the military, with the backing of Brazil and the US, overthrew Morales and put Añez in power, she claimed her only duty was to oversee new elections within 90 days. MAS still has a parliamentary majority.

The elections were scheduled for 3 May, but Añez postponed them on the pretext of the pandemic. Assuming they go forward as scheduled on 6 September, the MAS candidate, Luis Arce, polling at 33 per cent in the most recent survey, is likely to win, perhaps even in the first round, just as Morales won in the first round last October. Allegations of electoral fraud have since been shown to be false, but they served their purpose, which was to remove Morales from power. If MAS wins again in the first round, the Bolivian right will be exposed not only as racist, corrupt and violent, but also as divided and inept.

Añez’s approval rating briefly surged to almost 70 per cent in May after the government made direct cash payments to the poor. It has since dropped to 46 per cent, and there’s no reason to suppose that would translate into an electoral victory. According to polls conducted in March, she was on 17 per cent, one point behind the centre right candidate Carlos Mesa, who came second to Morales in 2019. Chi Hyun Chung, a conservative medical doctor with no experience in politics, will dispute the evangelical vote, but was polling at under 4 per cent. Luis Eduardo Camacho, the fascist firebrand who led the coup effort in Santa Cruz in co-ordination with the Brazilians, has tanked into single digits, but he will split the far right vote. Campaigning is not permitted until 7 August, but the electoral court is currently deliberating on whether Añez is covertly campaigning under cover of the pandemic. Regardless, unless she and Mesa join forces, her chances of making it to the second round seem minimal.

She is therefore trying to bar Arce from running and remove MAS as a political party. The right-wing opposition – which is based in the tropical lowlands of the east, where agri-business, finance, and gas extraction are concentrated, with centrist outliers like Mesa in the highlands – performed this Keystone Cops routine during Morales’s time as president (2006-19), and it has continued since his ouster. US and Brazilian support have yet to alter this basic feature of Bolivian politics; and the paranoid style of the far right has not augmented its power.

Although dozens of her own officials have been involved in corruption scandals, including a health minister caught price-gouging on respirators, Añez – like Bolsonaro and Trump – peddles conspiracy theories about enemies in the media, government and civil society. They allegedly follow Morales’s directives, and plot her overthrow through terrorism and drug trafficking in conjunction with Peruvians and Colombians (never mind that Colombian guerrillas are less than a shadow of their former selves).

Such theories erode whatever remaining credibility the regime may have, but widen the net of potential adversaries to be persecuted. Several dozen people were arrested in April, and in May, after protests broke out in the southern district of Cochabamba and El Alto, the predominantly indigenous city that overlooks La Paz, Añez issued a decree that would allow the state to bring criminal charges against anyone suspected of spreading information that could put public health at risk. Nominally a response to the pandemic, it was also intended to intimidate opponents. The UN high commissioner for human rights asked the Bolivian government to modify the decree; Añez cancelled it the next day. In co-ordination with the (US Drug Enforcement Agency) DEA, which Morales had banned from the country, the counter-narcotics police (FELCN) have stepped up operations. They are especially active in the Chapare lowlands of Cochabamba, where Morales emerged as a national political leader in the 1990s from among the Quechua-speaking peasant community trade unions.

Nevertheless, with Covid-19 raging beyond control and shaking Bolivia’s fragile health infrastructure, Añez is unlikely to hold on much longer, or to make an eventual second round in 6 September (unless Mesa drops out and backs her). Further calls for Bolivians to pray and fast will fall on deaf ears, as there are now more than 35,000 confirmed cases (more than double the number on 9 June), often rising at more than 1000 per day, with at least 1271 deaths (also more than double the number on 9 June). These numbers are surely an undercount. A dozen of Añez’s officials are in quarantine, including the minister of the presidency, Yerko Núñez, who has tested positive along with six other ministers.

In Trinidad, the capital of Añez’s home department of Beni, in the eastern lowlands, 71 per cent of people lack access to sanitation and 44 per cent lack running water. Public and private health services have collapsed under the burden of 3075 Covid-19 cases. The same goes for Camacho’s home city of Santa Cruz, the economic and political powerhouse of the eastern region. Three days after the department reopened, doctors threatened to go on strike for 24 hours as 734 new cases appeared in a single day, bringing the department’s total to more than 20,000 cases, with 506 dead.

In Cochabamba, the gateway from the western highlands to the eastern lowlands, funeral services are overwhelmed and public cemeteries overrun, with 3744 cases and 221 dead. Medical personnel went on strike demanding to be tested after the death of a co-worker. People have been waiting at home with their dead, sometimes for up to four days. La Paz is better, though not markedly. Nationwide, 60 per cent of ICUs and 80 per cent of respirators are private, so most Bolivians could not afford treatment even if they could find it without having to wander from clinic to clinic, as is presently the case. None of Bolivia’s neighbours is in a position to help, since all but Paraguay is in far worse shape, and Argentina refuses to recognize the coup government as legitimate. According to the World Bank, the Bolivian economy is set to contract by 3.4 per cent in 2020, its worst performance in 36 years.

Given the scale of Bolivia’s disaster, and the destruction of the rule of law under Añez, it is unclear whether even a MAS victory in the first round in September – far from guaranteed – can break the current impasse. The common ruin of the contending classes seems likely.

Featured image: Senator Jeanine Añez proclaims herself President of Bolivia on February 12, 2020, and promises elections in 90 days. After one postponement, elections are now scheduled for September 6., Ho/ El Deber / AFP