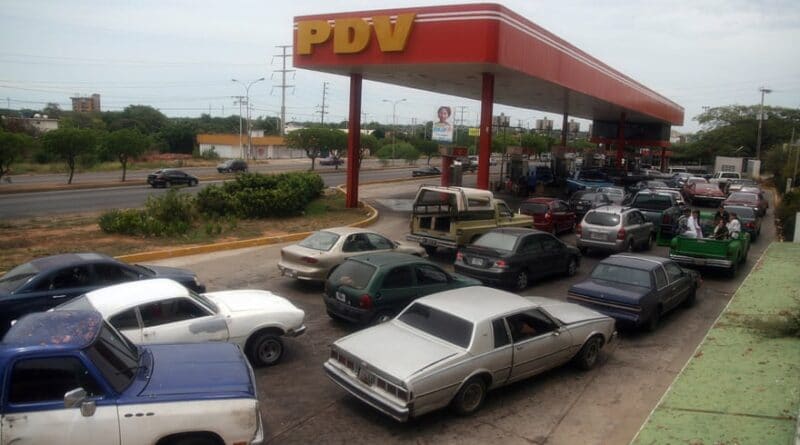 A tour made of service stations in Caracas and its surroundings this Thursday, November 4, by Laiguana.tv’s team of reporters, led by the journalist Mirelvis Gutiérrez, found two contrasting realities. On the one hand, at the pumps that sell fuel at international prices, queues are practically non-existent and the supply is constant. Alternately, where subsidized gasoline is sold, long lines persist.

On Victoria Avenue in Caracas an interviewee told Gutiérrez that, although they still have to wait several hours to refuel, the situation has improved in comparison to previous months.

Since June 1, 2020, Venezuela has used a dual system for gasoline sales in which most gas stations in the country—approximately 1,500 nationwide—sell gasoline at a subsidized rate of .005 bolívars per liter, while approximately 200 stations were handed to private entities to sell gasoline at international prices, currently $0.50 per liter.

A change in the price of the subsidized gasoline was authorized on October 24, meaning an increase of about 2,000%, from .005 bolívars per liter to .1 bolívar per liter. Many analysts see the measure as a necessary one, taking into consideration that filling a regular 50-liter tank of gasoline at the old price cost only .25 bolívars, equivalent to approximately six cents in US currency. At the new rate, filling the same tank will cost five bolívars, equivalent to approximately $1.20 USD.

A citizen identified as Alberto Pereira said that waiting times “depend on the pump” and, in his experience, the times can vary between two to five hours, although exceptionally they could extend up to seven hours, and even result in a futile effort—meaning returning home without gasoline because the station closes while one is waiting.

However, although Pereira was trying to acquire subsidized fuel, he remained in favor of the price adjustment. “I think they should adjust it and set a standard price for everyone, to avoid the pain,” Pereira said. “Also, with this there are many mafias… I think that this is known to all.”

“Recently it took me three to four hours,” Pereira said. “Previously it lasted all night… That is, 12 hours, but this month, three to four hours.” Another customer, identified as Gabriel Sánchez, commented that subsidized gasoline provided an alternative for people who do not handle dollars.

Upon leaving Caracas, the situation worsens. On a tour of Charallave, Miranda state, Gutiérrez reported that at the time of her visit, people were spending “more than 14 hours queuing on the highway to be able to access subsidized fuel, which reflects an irregular distribution of gasoline.”

Since the imposition of illegal US and European sanctions, particularly since January 2020, long lines to fill car and trucks with fuel in Venezuela have become common, despite the evident effort of Venezuelan authorities to resolve the complex issue. Various factors have exacerbated the situation, including oil production, but also extending to the industry’s ability to procure parts abroad to repair and maintain Venezuelan refineries, and to update its technological infrastructure. In addition, Venezuela needs to import the light fuel necessary to refine Venezuela’s heavy crude oil and convert it into commercial-grade fuel. All these elements are heavily affected by the US and European criminal blockade on Venezuela.