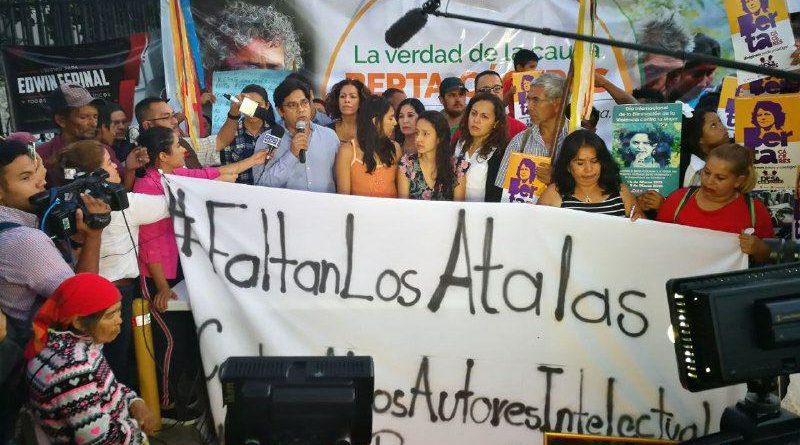 The convicted Elvin Rápalo, Óscar Torres, Edilson Duarte and Henry Javier Hernández, received a 34-year sentence for the murder of Cáceres and 16 more years for the assassination attempt against a Mexican citizen.

Judges attached to the Court of Judgment of the National Jurisdiction of Honduras, on Monday issued a sentence of 34 years in prison to four of the individuals found guilty of the murder perpetrated against the environmental leade, Berta Cáceres in 2016.

Those convicted corresponding to the names of Elvin Rápalo, Óscar Torres, Edilson Duarte and Henry Javier Hernández, received a sentence of 34 years for the murder of Cáceres and 16 more years for the assassination attempt against a Mexican citizen.

For their part, citizens Douglas Bustillo, Sergio Rodríguez and Mariano Díaz Chavez also linked in the murder of the environmental activist, were sentenced to 30 years in prison.

Among those convicted is a former employee of Empresa Desarrollos Energéticos SA (DESA), a former military officer and Major General of the Honduran Army, who were captured by the Technical Agency for Criminal Investigation (ATIC) in the framework of the operation called “Jaguar”, created to find the killers of Berta Cáceres.

For her part, the activist’s daughter, Berta Zuñiga Cáceres, recalled that 45 months have elapsed since her mother’s vile murder and that despite the conviction there is still no justice, “there are convictions, but no justice. The intellectual authors of the murder continue enjoying impunity, despite the fact that it has been proven that the Energy Development Company was responsible for assassinating Bertha Cáceres,” she added.

Meanwhile activists all over the world wonder what is going to happen to the masterminds behind Berta’s assassination. Matt Ginsberg-Jaeckle, a long standing Chicago based activist posted a warning about this, making visible the strong commitment -inside and outside Honduras- to finally get real justice for Berta Caceres.

“Today marks 45 months since the assassination of my friend, Honduran indigenous leader Berta Caceres Flores. Today the direct perpetrators of that assassination – including several current and former members of the Honduran armed forces – will be sentenced. But the masterminds remain practically untouched. The masterminds include a U.S.-trained former military intelligence officer and CEO of the company building the dam that Berta and COPINH, her organization, were opposing, as well as members of the Atala family, one of about ten families of the Honduran oligarchy, who were the controlling board members and principle investors in the project, and maintain close ties to the US-backed-and-financed Honduran dictatorship. That is why today around the world people are re-affirming that the struggle for #JusticiaParaBerta continues and that #FaltanLosAtala – we need the Atala brought to justice and to stop U.S. tax dollars from continuing to fund the brutality of the Honduran dictatorship.”

Featured image: Cáceres, co-founder of the Civic Council of Popular and Indigenous Organizations of Honduras (Copinh), was murdered on March 3, 2016.

Translated and edited by JRE/