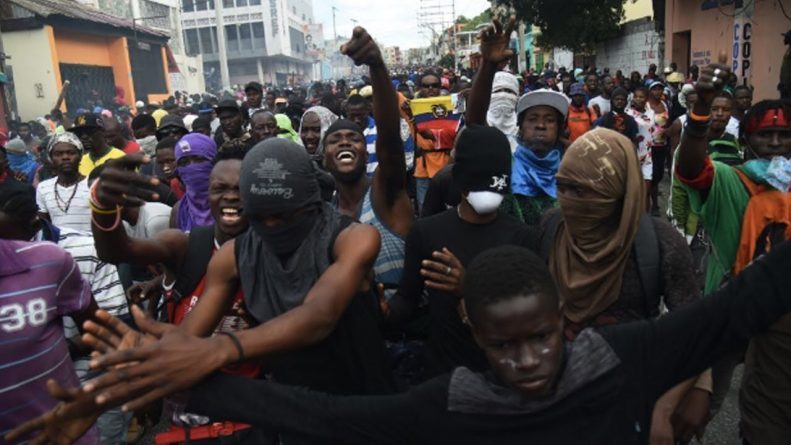 MARC STEINER: Welcome to The Real News Network. I’m Marc Steiner. Great to have you all with us.

Haitians are in revolt. For the last six days, thousands of Haitians have taken to the streets, demanding the ouster of Jovenel Moise and his government. Some say the revolt is about opposition to raising gas prices, like the Yellow [Vests] in France. But it’s not a mimic, nor a mirror image of that revolt. The roots of this revolt in Haiti are in Moise’s election that many saw as tainted, maybe stolen. It’s wrapped up in the United States efforts to oust Venezuela’s government, pushing the Haitian president to denounce him and support that ouster. It’s about the $4 billion loan given to the Haitian government to develop the country via Venezuela’s Petrocaribe program, and the double digit inflation making some of the world’s most impoverished people even poorer. And it’s about the 228-year-old U.S. effort to control Haiti and Haitians’s resistance to that. Could this be the beginning of a another revolution like the one 33 years ago that ousted Claude Baby Doc Duvalier? Maybe. We’ll see. And we’ll try to unravel all this as we talk with Kim Ives, who’s editor of Haiti Liberte and Kim welcome to The Real News. Good to have you with us.

KIM IVES: Thank you very much. Good to be with you, Marc.

MARC STEINER: So let me open our conversation with this clip of what’s happening in the streets, as well as a statement from the president of Haiti, and we can take it from there.

SPEAKER: Down with Jovenel. We are going to burn the country down if he does not step down.

SPEAKER: We need a new government; a government that cares about the youth. We are tired of the current system.

MARC STEINER: So I guess the question–let’s just start here. Talk about the reality of what people just saw is. I mean, who is Moise? How did he become president? How does that play into what we’re seeing now, and why the anger is so deep in the street?

KIM IVES: Well, Jovenel Moise was indicted when he came into office. When he ran for office he was indicted by the Corruption Unit, which found evidence that he was laundering millions of dollars. Now, where did that money come from? Most likely Petrocaribe. We haven’t had a real forensic analysis of it yet, but it’s probably not drug trafficking or kidnapping, which are the other two sort of sectors of [inaudible] and Duvalier’s group he’s connected with. But the Petrocaribe money was just a huge cash cow for them.

And so he came to power through having the best funded campaign, largely through this Petrocaribe money, and through the fact that his business, which was basically a shell corporation of sorts called Agritrans, supposedly exporting bananas to Germany. It only exported two shipments to Germany. So it was pretty much a front to receive this money. And in fact, one of the sparks that set off the latest uprising is the accounting court in Haiti basically did their review of the Petrocaribe money that was spent, and found that his firm received a lot of money to fix the road and do other repairs but they didn’t do it.

So Jovenel Moise is really the protege of the founder, we can say, of this group, a guy called Michel Martelly who came into power in 2011.

MARC STEINER: We’ll explore that if we have time, yeah.

KIM IVES: Right, we’ll explore that. He basically came into power through the good graces of Hillary Clinton, who was then secretary of state, to do a real thumbnail–the earthquake happens in January 2010. The U.S. government and Bill Clinton basically take over the Haitian government. President Rene Preval, who was some kind of ally of President Jean-Bertrand Aristide back in the day, they somewhat estranged. But he was very much sidelined. And he had his candidate in that election who came in second and was going to be in the runoff. But Hillary Clinton, in the middle of the Arab Spring, flew down to Haiti and read him the riot act, and said no, no, your candidates aren’t going to be in there; it’s going to be Michel Martelly, who placed third, apparently. And so Preval basically bowed down, as was his wont, and he ended up replacing Jude Celestin with Martelly.

So Martelly came into power that way, and he was the one who I could say plundered the lion’s share of this Petrocaribe fund. The Senate of Haiti had two commissions which put out two different reports which found that about $2 billion was misappropriated. But the full amount of money that came in was between $3.8-4.2 billion. So that’s what the Haitian people are asking; where that money has gone.

MARC STEINER: So a couple of quick questions here, before I come right back to Venezuela and Haiti, where we are now, what could happen. You mentioned, as you began this, the Tonton Macoute, the dreaded secret police from both Papa Doc and Baby Doc Duvalier’s regimes.

MARC STEINER: So are you saying that the Tonton Macoute that terrorized the Haitian population is involved in this new government? That they are–the remnants of that group are actually still doing criminal activity and being involved?

KIM IVES: Yes, well, Macoute is in the Haitian community kind of a shorthand for a particular sector. Haiti’s ruling class has two ruling groups; a bourgeoisie, a sort of comprador bourgeoisie, import-exports, imports refrigerators, washing machines, chiclets, and exports the coffee, sugar, and cacao, that kind of thing. Back in the day. This was 30 years ago. Those two sectors have kind of merged over these years as the popular movement has risen. They used to be rivals, but now they’ve had to kind of put aside their rivalry and join together in what the Haitians call the Macouto-Bourgeoisie. This big landowning sector, what’s called the [grandant] in Haiti, their force, their expression politically, and repressively, is the Tonton Macoutes, these kind of thugs. And so ‘Macoute’ is a word that’s used to more or less delineate this sector of big landowning; now more criminal power.

MARC STEINER: So I’m curious–this erupted, we’re seeing, at least we’re seeing, six days ago in the streets. I’m curious why it erupted now, A, and B, is there a political organization? I mean, before when the folks were gathering around people like Aristide or Jean-Juste and others who were opposing the dictatorial regimes of Duvalier, is there organization that’s behind this, as well? Or is it just the streets erupting? What exactly is happening?

KIM IVES: Well, it’s more of the latter. It’s more of the streets erupting. There are–the Lavalas Family of Jean-Bertrand Aristide is still there. There’s been a split off group which is headed by a former associate of Aristide, and now since alienated, called Senator–he’s an ex-senator now, Moise, Jean-Charles. And there is a sort of coalition group called the popular and democratic sector headed by an outspoken attorney named Andre Michel.

MARC STEINER: Are they united now around this?

KIM IVES: Not really. They have occasional alignments. And there’s one third sector which is that of the–which was aligned with the former president Rene Preval. He died last year. But his sort of proteges still run it in particular a guy called Jackie LeMarque who’s the head of University down there called Quisqueya University. This is sort of the enlightened bourgeoisie know the kind of liberal sector and they pushed the Petrocaribe question very forcefully starting last summer.

So those are the three sectors but the streets don’t really recognize them. I mean just the other day the opposition, mostly around the democratic and popular sectors, tried to have a meeting. And the people said, listen, we don’t recognize you. And they’re in the street. So it’s very similar, really, Marc, to 1986, when there wasn’t a clear leadership, there wasn’t a real vanguard organization leading it. No. This is more from the streets. And a lot of–in fact, it’s getting–you know, as most revolutionary situations are, very confusing, because you have all sorts of former allies of Jovenel Moise and Michel Martelly, people like Youri Latortue, who the U.S. Embassy, as we revealed in WikiLeaks cables, called a poster boy for corruption and a Mafia chieftain. He’s now part of the movement to oust Jovenel, along with a lot of other total scoundrels, total right-wing scoundrels. And they are all in this together.

MARC STEINER: So we are here talking about what’s going on in Haiti with our guest, Kim Ives. And we’re about to explore what is actually happening with Venezuela, the U.S., and why that’s part of this, and where this may take Haiti. So we’re going to end this segment here and come back with a fresh segment with Kim Ives looking at that. So stay with us here at The Real News.