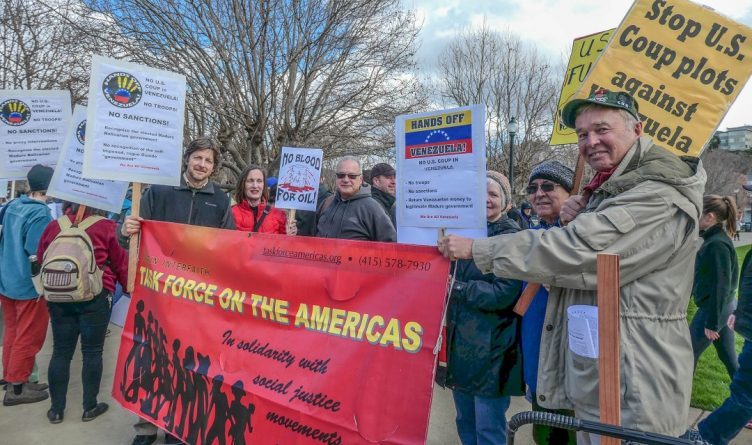 Over 100 people turned out Sunday, February 10, on a rainy Oakland weekend to say, “No U.S. intervention in Venezuela: No troops, no sanctions, return Venezuelan money to the Maduro government, and no proxy interventions (e.g. Colombia or Brazil).” They also demanded that the U.S. recognize the elected Maduro Bolivarian government, with no recognition of the self-imposed rogue Guaidó government.

The rally, initiated by We Are All Venezuela, Marcha Patriótica de Colombia, the Communist Workers League – Bay Area, and the Task Force on the Americas, was held at the Lake Merritt Columns in Oakland. Participants lined up along the busy Grand Ave with many anti-coup, pro-Maduro signs and were greeted with lots of support honks from the cars passing by.

The U.S. has tried to overthrow the Bolivarian government of Venezuela ever since Hugo Chavez was first elected. Due to the massive support by both the people and the military the U.S. has been thus far unsuccessful in overturning the Venezuelan government. Now the U.S. is organizing a coup using Juan Guaidó , the self-proclaimed right-wing “president”, who was never elected and is unknown. However, Nicolas Maduro was re-elected in May, 2018 by a majority of the people of Venezuela.

Because the Bolivarian government has held control over their oil resources, has initiated great reforms in the areas of education, health care, agriculture, and influenced popular movements throughout Latin America and the Caribbean, the U.S. has defined Venezuela as an enemy that must be destroyed.

The U.S. has caused great suffering with their harsh economic sanctions, freezing Venezuelan bank accounts from oil sales, support of many right-wing coup attempts, and manipulation of the media throughout Latin America with lies about Venezuela. The U.S. never offered humanitarian aid until it could be a tool for the Guaidó coup.

The rally was co-chaired by Alice Loaiza of Marcha Patriótica de Colombia and Tova Fry of the Communist Workers League. There were many speakers, including Rick Sterling and Roger Harris from the Task Force on the Americas, Rhonda Ramiro of BAYAN USA, Pierre LaBosierre of the Haiti Action Committee, Rosa Pergams of the Party for Socialism and Liberation, Bilal Ali of the Black Alliance for Peace, Teri Matteson of the Campaign To End US and Canada Sanctions Against Venezuela, and Marsha Feinland of the Peace and Freedom Party.

Two right-wing counter protest groups turned up. Across Grand Ave, Honduran contras raised a couple of banners and shouted. Then after the rally had begun, a small group of pro-Guaidó people with a loudspeaker tried to march right into the rally. They were blocked from coming through, but continued to try to disrupt by making noise with their loudspeaker. The Community Ready Corps for Self-Determination was there providing security for the pro-Maduro rally and made sure that the disruption was minimized, helping to keep everyone safe.