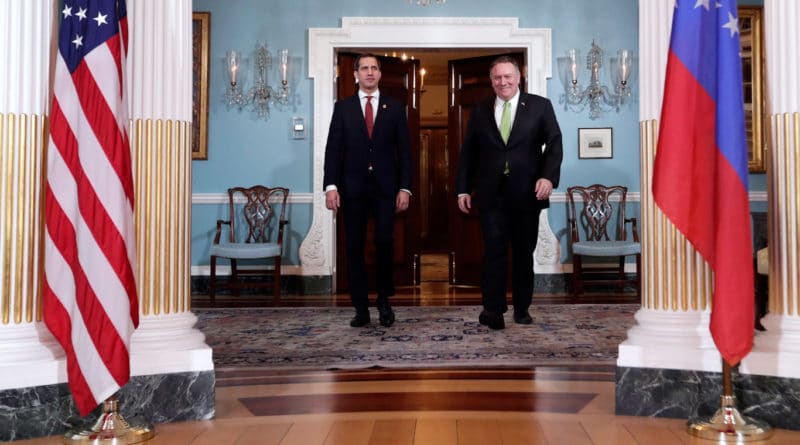 US regime change operations have been outsourced to semi-private companies and NGOs for decades, giving the government a paper-thin veneer of plausible deniability.

The government of Venezuela is claiming victory after a coup attempt led by a group of mercenaries led by ex-Green Berets failed spectacularly Sunday, as the highly trained group’s incursion failed to even make it to the beach, overpowered by local fishermen’s collectives. Eight of the party were killed, and 23 more are in custody, including two Americans. Now, as the dust settles, recriminations are beginning at home.

Connecticut Senator Chris Murphy described the fiasco as a “botched Bay of Pigs like paramilitary operation.” “Now, [Senators] Tim Kaine, Tom Udall and I are asking the administration a simple question: What did they know, and if they didn’t know, why not?” he added.

President Nicholas Maduro, whose forces appear to have had knowledge of the attack before it took place, is certain who was behind it. “The United States government is fully and completely involved in this defeated raid,” he said, describing it as a “covert operation ordered by Donald Trump,” supported by Colombian President Ivan Duque and self-declared U.S.-backed “interim president” Juan Guaidó, outsourced to “professional American mercenaries” on a mission to assassinate him.

Trump officially denied all knowledge of the weekend’s events. But Secretary of State Mike Pompeo contradicted the president’s words on Wednesday, stating only that “there was no U.S. government direct involvement,” although he did admit that he had known who bankrolled the failed project, promising to divulge the information “at an appropriate time.”

However, in an interview with CNN on Wednesday, one of the coup’s organizers, Juan José Rendon, may have let slip that the Trump administration was even more heavily involved than it concedes. Referring to a $212.9 million contract they signed with Guaidó in October to overthrow the government, Rendon explained that it was above board as they were merely capturing and delivering to justice members of the Maduro regime who have an arrest warrant in the United States. The problem is that those warrants, along with the $15 million bounty placed on Maduro’s head, were only made public in March. Therefore, if Rendon spoke correctly, it indicates his team may have had months of contact and cooperation with the U.S. Department of State.

The two Americans captured have been named as Airan Berry and Luke Denman. Both are ex-Special Forces and honed their skills in the U.S. wars in the Middle East. Denman’s family made an impassioned plea for his safe return. “He deserves to come home,” said his brother Mark, claiming that, “Luke’s motivation has always been to help others in any way he can… He thinks of kids who are being harmed and innocent people who are suffering and I’m sure this was his motivation to do this.” Perhaps he had not watched Denman’s interview broadcast on Venezuelan television, because the 34-year-old Texan said he participated after the promise of being paid between $50-100,000 for the job, describing himself as a “mercenary” for hire.

Both Berry and Denman worked for Silvercorp USA, a private security firm set up in 2018 by another former soldier, Jordan Goudreau. The company began by trying to sell school security services, but Goudreau and his men diversified, even being directly employed as private security guards by the Trump team at their rallies.

If you were to tell me that a QAnon guy (Airan Seth Berry followed hashtags QArmy and QAnon8kun on twitter) would end up on Venezuelan state media confessing to a coup — in the middle of COVID — I would have been like lol gtfo. But here we are. pic.twitter.com/jMKgWK7mB6

While the White House might officially deny direct involvement in the latest coup attempt, it is difficult to see what stronger evidence could come out directly implicating them. For a number of decades, U.S. regime change operations have been outsourced to semi-private companies and NGOs, rather than directly employing government officials, giving the government a paper-thin veneer of plausible deniability. The founder of the National Endowment for Democracy, Allen Weinstein noted of his organization, “A lot of what we do today was done covertly 25 years ago by the CIA.” Thus, this is exactly the maximum extent of evidence that any modern covert regime change operation has linking it to the government.

The Trump administration refuses to recognize Maduro, despite his election victories, instead, propping up deeply unpopular right-wing politician Juan Guaidó as the ruler, despite his failure to control or command anything inside the country. The U.S. has a long history of supporting coups against the socialist government. In 2002, it bankrolled a briefly-successful ouster of Hugo Chavez, only for it to be rolled back almost immediately through mass popular mobilization. Since then, it has continued to fund, train and nurture virtually every opposition politician and organization, more or less openly. Thus, the question of whether the operation was directly organized in Washington D.C. is moot, because, as with so many other botched power grabs, it would never have happened without the implicit and explicit support of the power of the U.S. empire.