The contract signed by Juan Guaidó with Silvercorp contemplated assassinating the president of the republic, Nicolás Maduro, and his Executive cabinet, as well as Diosdado Cabello and officials of the high military command of the Bolivarian National Armed Force (FANB). The first phase of the contract would cost 50 million dollars, the Minister for Communications, Jorge Rodríguez revealed this Friday when reading part of the addenda of the 41-page contract, which was originally published, on a VTV broadcast and by The Washington Post on their website .

The contract specifies that SilverCorp USA is to assist the group of allies in planning and executing an operation to capture, arrest and remove President Nicolás Maduro; the Executive Vice President, Delcy Rodríguez; Diosdado Cabello, and other high-level government officials, overthrow of the current regime and installation of Juan Guaidó as President. 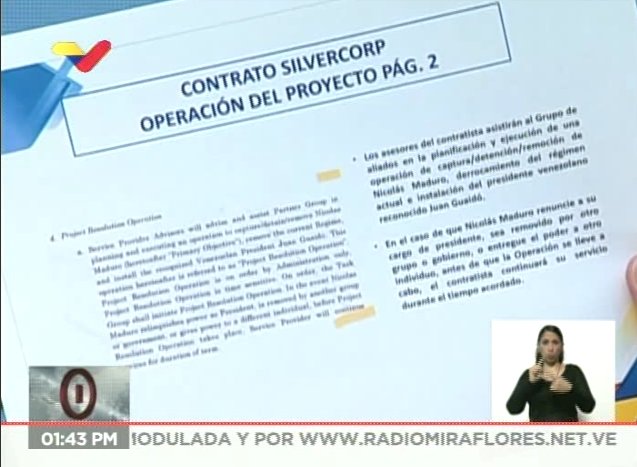 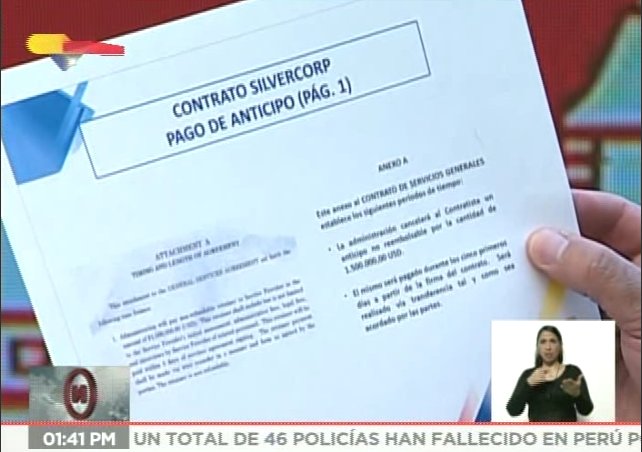 “If Nicolás Maduro resigns, is removed by another group or transfer his power to another individual before the operation is carried out, the contractor will continue his services for the agreed time,” the text says.
They also point out that a group of investors will give a loan to finance the project, and that Guaidó agrees to pay them with 55% interest. If the plan is successful, Goudreau will receive a bonus of $ 10 million. 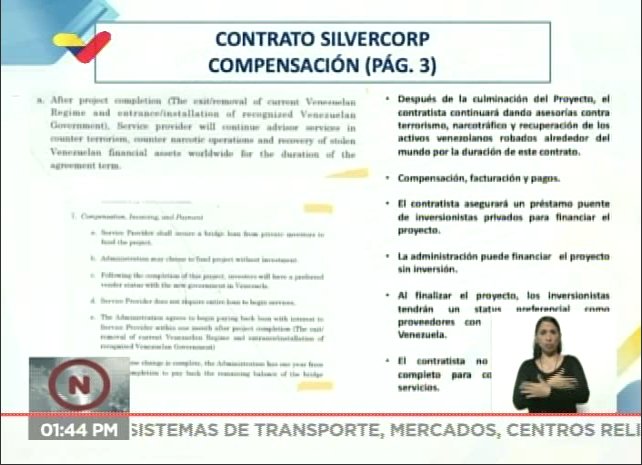 The military forces of the previous regime will be declared “hostile forces,” which would include the entire Bolivarian National Armed Forces, conventional and unconventional naval, land forces. 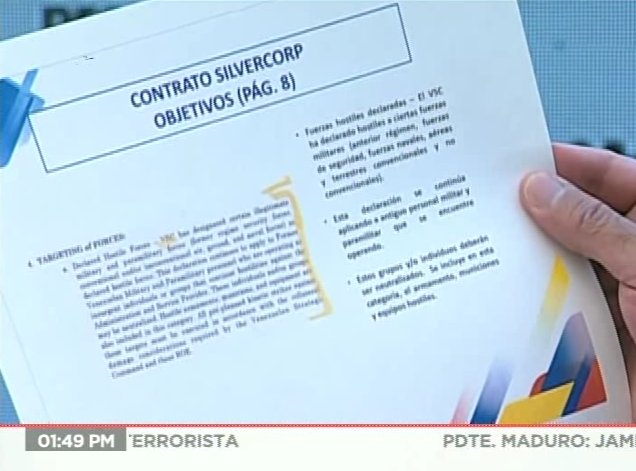 Nicolás Maduro, Diosdado Cabello, his lieutenants and allies will be declared hostile, and they will be eliminated, Jorge Rodríguez stressed. 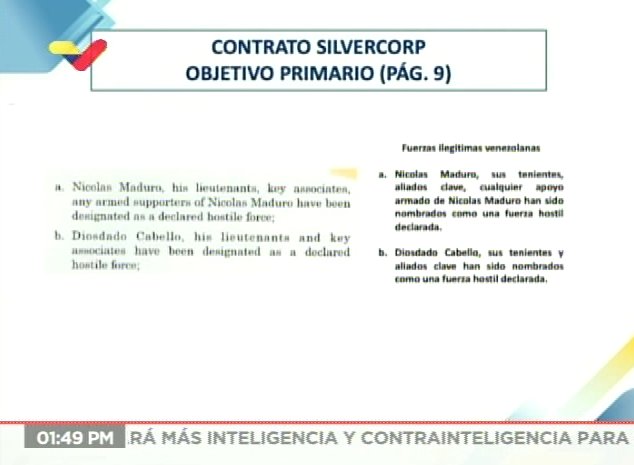 Goudreau will have the authority to approve any attack and reactivate fire against military and non-military objectives, “Venezuelan infrastructure and economic objectives”, “Venezuelan roads and media” and those buildings that they declare “associated with terrorists or hostile forces.” 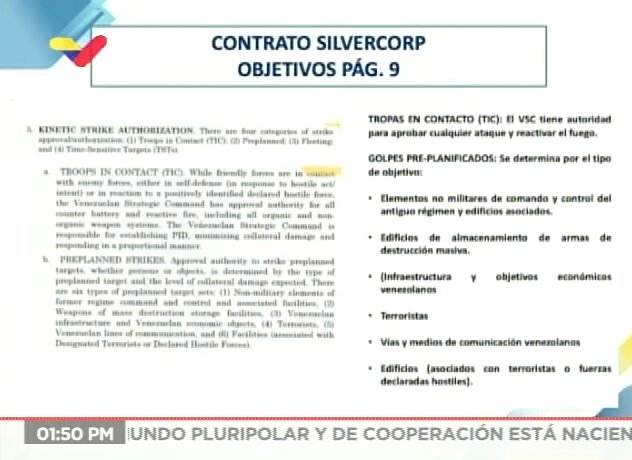 Infrastructures, lines of communication and economic objectives will also be disabled or destroyed. 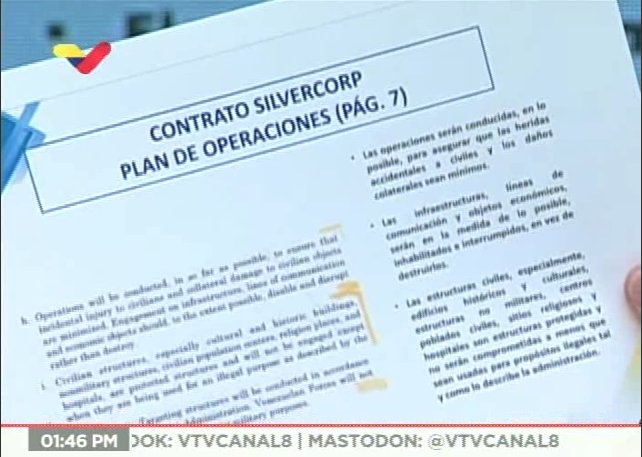 “They were authorized to eliminate military officials of the regime, or terrorist non-military elements,” which, Rodríguez indicated, will encompass Venezuelans from communal councils, soldiers, residents of the Great Venezuela Housing Mission, or any Venezuelan.
They were authorized for “the use of any type of weapons, self-activated or command mines,” explained the vice president.
Goudreau was authorized by Guaido to “authorize an attack against non-military elements of command and control of the former regime,” says the document shown by Jorge Rodríguez, who points out that these are targeted killings. 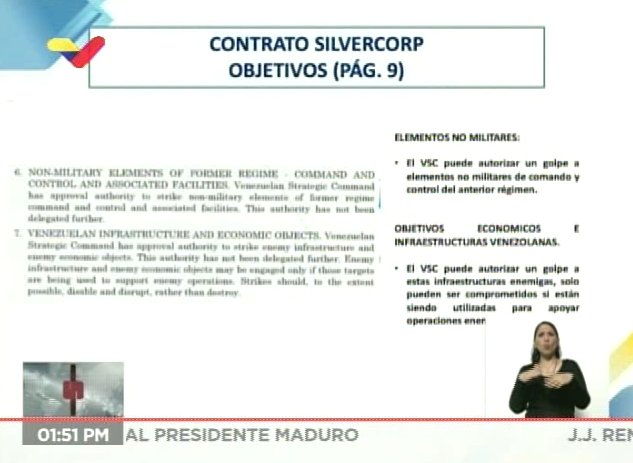 The document practically authorizes Goudreau to eliminate any citizen who can be classified as a “group, cell or buildings associated with terrorism”, including urban housing complexes by the GMVV, social movements, communes, etc. 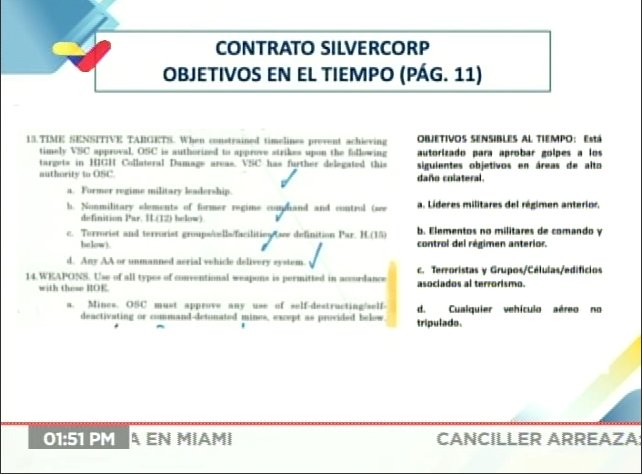 Antipersonnel mines may be used. 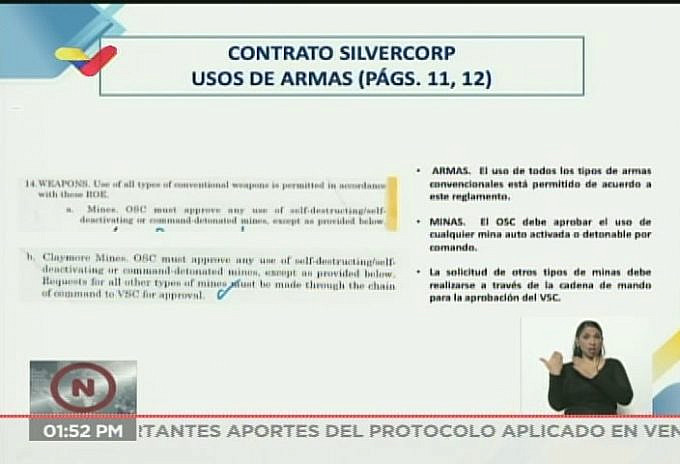 The document describes the “gradual use of force” that they will use if there are protests or “threats”, as well as the conditions for detaining civilians, even allowing the use of lethal force. 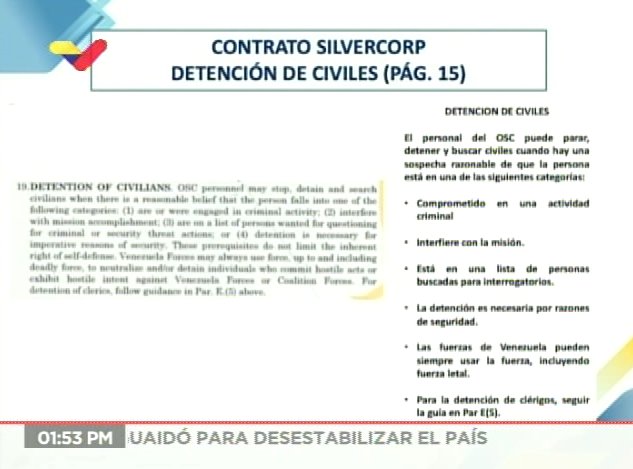 The use of lethal force will be permitted to protect properties designated as “mission vital.” 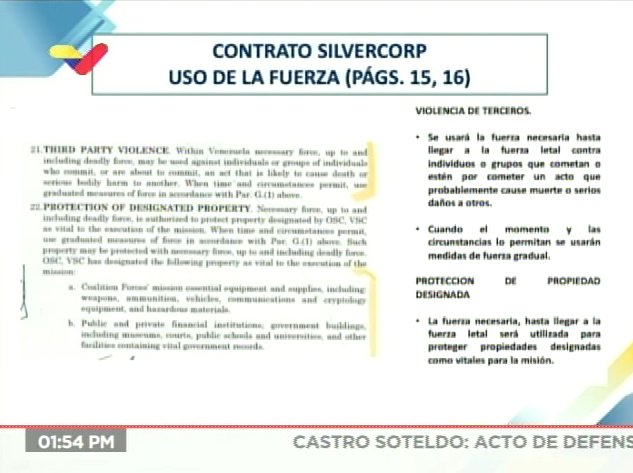 Another addendum established the creation of a kind of “military house” to take care of Guaidó during the murders and violent actions. “It is a document of death,” said Rodríguez.
SilverCorp will not be responsible for any act of violence or destruction committed by third parties during the execution of the contract. If they sue Silvercorp, even if it is in the United States, the Guaidó government must pay the defense expenses and assume financial responsibility. 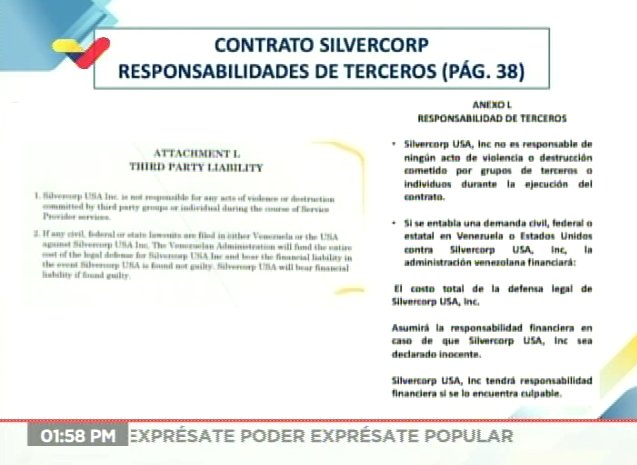 In addition, the contractors, those who put up the money and the mercenaries, were going to be able to enter the country without a passport, whenever they wanted and only with a Silvercorp card, as well as carry firearms “when in service.” All North American participants will be insured by the administration, and if anyone is affected or neutralized (killed) in action, Guaidó had to pay $ 450,000 to the closest relative.
The chain of command for this operation was as follows:

Apart from the complete document, the vice president presented a video in which Juan José Rendón (aka JJ Rendon) assumes the signing of the contract for the perpetration of terrorist acts in the country by the mercenary contractor Silvercorp. “The contract does exist, and I signed it,” confesses JJ Rendón in the video. 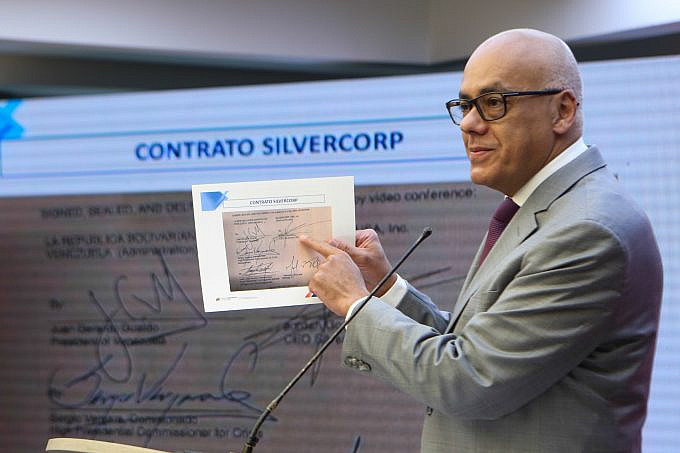 There is also the Guaidó signature. “We already compared the signature with a graphologist. That he submits to public opinion and denies it. Jordan Goudreau, JJ. Rendón and Sergio Vergara signed the contract, so they already confessed,” said Rodríguez.