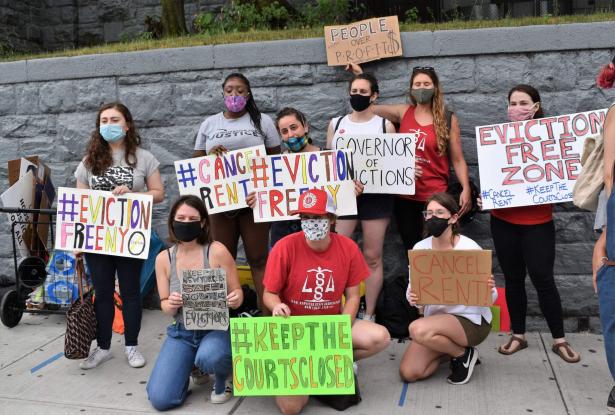 Donald Trump’s executive order wouldn’t do much to immediately help the 20 million or so Americans who face losing their homes in the next few months.

hen President Donald Trump signed an executive order Saturday to shield tenants from the threat of eviction, he said it would “solve that problem largely, hopefully completely.”

Yet not only would his action fail to halt evictions, it wouldn’t do much of anything to immediately help the 20 million or so Americans who face the loss of their homes in the next few months amid the coronavirus crisis.

Trump’s order does not extend the lapsed four-month eviction moratorium, which itself covered only about a quarter of the nation’s 44 million rental units. Instead, it merely directs the Department of Health and Human Services and the Centers for Disease Control to “consider whether any measures temporarily halting residential evictions” are necessary to halt the spread of Covid-19.

It also provides no direct money to aid tenants in distress, who will eventually have to pay months of back rent. The departments of the Treasury and Housing and Urban Development were instructed to identify sources of funding. Neither could provide details Tuesday on how they would do that.

“It’s nothing but a political ploy,” said House Financial Services Chair Maxine Waters (D-Calif.), who dismissed the “so-called executive order” as a stunt designed to deflect criticism from the president. “It means nothing.”

But housing advocates argue that the measure may actually be worse than doing nothing at all, by easing the urgency to reach a deal with Congress and giving renters a false sense of security.

The order will “mislead renters into believing that they are protected when they are not,” National Low Income Housing Coalition President and CEO Diane Yentel said in a statement.

“This executive order is reckless and harmful, offering false hope and risking increased confusion and chaos at a time when renters need assurance that they will not be kicked out of their homes during a pandemic,” she added.

The four-month CARES Act moratorium ended July 25, and most states are letting their own temporary protections lapse. At the same time, the federal enhancement to unemployment benefits — a $600-a-week boost that has helped struggling tenants pay at least some of their rent — has also expired.

The expiration of those benefits means somewhere between 19 million and 23 million people — about one in five renters in the U.S. — will be at risk of eviction by the end of next month, according to an analysis by the Aspen Institute. Negotiations to renew both measures as part of the next relief package broke down late last week.

Trump, questioned at his Tuesday press conference about the prospect of mass evictions, said, “We are not allowing that to happen.”

“We are stopping evictions,” he added, referring to the executive order.

Waters, speaking with housing advocates on Monday, called for the urgent “passage of a statutory extension of the eviction moratorium and the creation of an emergency rental assistance fund.”

The House has passed two bills that would provide $100 billion to help tenants pay their rent, but the Senate has not moved on either piece of legislation.

Saturday’s order hints at rental assistance without specifying an amount or where Treasury and HUD should draw the money from.

HUD twice declined to provide details on what the agency plans to do differently as a result of the order. Treasury said it had no comment.

“We are in close contact with the White House and other federal agencies on the Executive Order and its implementation,” HUD spokesperson Brad Bishop said Tuesday. “We will provide additional information as these discussions continue.”

The White House, meanwhile, is insisting the new order will prevent people from losing their homes.

“There will be no evictions,” economic adviser Larry Kudlow said in an interview with CNN on Sunday.

When the CNN anchor pressed him on whether the order actually stops evictions as some struggling tenants may believe, Kudlow said it will provide a “mechanism” to do that.

“We’re setting up a process, a mechanism, OK? I can’t predict the future altogether,” he said.

Katy O’Donnell is a financial services reporter for Politico.