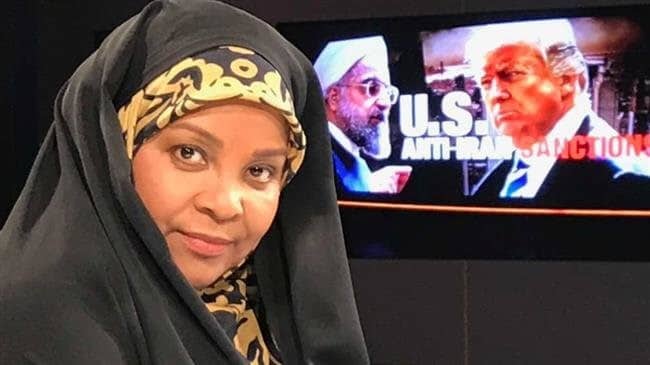 The International Federation of Journalists (IFJ) has expressed its “serious concern” over the detention of Press TV news presenter Marzieh Hashemi, who has been imprisoned by the Federal Bureau of Investigation Police (FBI) on unspecified charges.

The federation wrote in a Twitter post on Friday that the United States must give clarifications about the situation of the anchor of the English-language channel Press TV. “#US: Iranian #journalist Marzieh Hashemi has been arrested in the US on undisclosed charges. We have serious concerns about her detention and we urge American authorities to clarify the situation @NUJofficial @PressTV #JournalismIsNotACrime,” it said.

Meanwhile, in their sermons to worshipers, Iran’s Friday prayer leaders also condemned the US for imprisoning the journalist.

Ms. Hashemi was taken into custody on Sunday in St. Louis, Missouri, where she had filmed a Black Lives Matter documentary.

The American-born, most famous for anchoring news programs and presenting shows for Press TV, was detained upon arrival at St. Louis Lambert International Airport in St. Louis, Missouri, on Sunday, her family and friends said.

FBI agents apprehended the Press TV journalist upon arrival at St Louis Lambert International Airport, before she boarded a flight to Denver, her son said.

The FBI has not commented on the case.

The Committee to Protect Journalists (CPJ) also on Thursday voiced its concern about US detention of the Iranian TV journalist and documentary filmmaker and called on the US Department of Justice to disclose the reason for her arrest.

“We are concerned by the arrest of a journalist for Iranian state TV, Marzieh Hashemi, and call on the US Department of Justice to immediately disclose the basis for her detention for the past five days,” said Alexandra Ellerbeck, CPJ’s North America program coordinator.

Hashemi is due to appear in a Washington, DC court on Friday.

The 59-year-old US citizen, who is based in Iran, was detained as a “material witness” to a criminal case and no charges were pressed against her, according to Hossein Hashemi, her elder son.