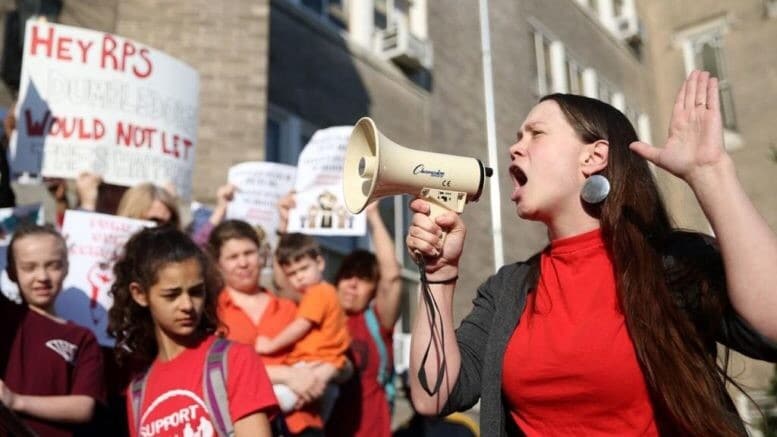 With over 30,000 teachers out on strike in L.A., once again America is mesmerized with a teachers’ strike. Nowhere are teachers more captivated by the events happening in L.A. than in Virginia, where a coalition of rank-and-file teachers is planning to go on a one-day walkout later this month.

On Monday, January 28th, thousands of teachers marching under the banner of Virginia Educators United are planning to call off from school for only one day in order to march on the state legislature. The teachers are calling on the Virginia legislature, which is considering $573 million for tax breaks for Amazon, to increase teacher pay in Virginia up to the national average, which it lags by $9,000 a year and to restore education funding to pre-recession levels.

The crowd in Richmond on the 28th is expected to be much smaller than in L.A., but as teachers in Virginia find themselves transfixed by the strikes in L.A., Virginia teachers say they expect their numbers to rapidly increase.

“First we had the blue wave and now we have the red wave and it’s just so exciting,” says Richmond social studies teacher Sarah Pederson an activist in the #RedforEd movement. “It’s been some of the most inspiring examples of bravery that I have ever seen.”

Unlike in L.A., teachers’ unions in Virginia don’t quite have the juice yet to hold prolonged strikes like in West Virginia or Oklahoma, where teachers struck for nearly two weeks last spring.

However, even talk of a smaller scale walkout is already starting to have a big effect on the education debate. Democratic Governor of Virginia Ralph Northam taking advantage of political momentum and a once-in-a-lifetime $600 million windfall from changes in the federal tax code, is proposing a 5% raise for teachers to the narrowly-held Republican legislature in the heart of the old Confederacy.

#RedforEd activists like Cherry Binkley, a retired teacher from Fairfax County says she is seeing a level of engagement from teachers in Virginia, where unions represent just 4.6% of all workers that she finds unprecedented in her decades of involvement in the states’ teachers unions.

“There is an old saying here that Virginia teachers are nice, polite people, who don’t make waves and there is a reason for that, which is they are very nice genteel people,” says Cheryl Binkley,  “But its also because they haven’t seen worker action in their lives.”

During the teachers’ strike that swept the nation last spring, Binkley, the administrator of the Virginia Bad Ass Teacher’s facebook group, says she saw her Facebook group explode from a mere 800 members to 1,800 in a little over a month.

In May, Cheryl Binkley began connecting her facebook group with other groups as various teachers’ union activists from around across the state began to meet to develop Virginia’s version of the #RedforEd movement.

They studied strikes in other states last year and eventually organized under the banner of Virginia Educators United (VEU), a grassroots rank-and-file organization of union members and non-union members alike modeled on similar organizations in states like Arizona.

VEU decided that while it didn’t have the strength for a long walk out like in L.A., that it could model a walkout like what happened in North Carolina, where 20,000 teachers under the banner of “It’s Personal” decided to take a personal day en mass to march on the state Capitol in Raleigh last week.

On January 28th, it’s still unclear how many workers will go out on strike. However as the teachers’ strike in L.A. gains national media attention, organizers say that more and more support is building for the walk-out.

“What’s happening in LA is energizing us here in Virginia, everywhere. There is a sea change happening in this country, ” says Cheryl Binkley.

Traditionally, teachers unions have been weak in a state like Virginia, which as a result of a 1993 law explicitly bans collective bargaining with public employees. Despite having a presence in nearly 130 school districts in the state, over 50,000 teachers refuse to join the Virginia Education Association.

“Most people complain that they aren’t really sure what the $50 they give a month [in union dues] really gets them because they can’t collectively bargain. Since we don’t have any say in any contract, many people don’t see it as worthy, ” says Gloucester social studies teacher and Afghanistan veteran Brian Teucke, a proud member of both the Richmond IWW and Virginia Education Association.

As teachers in Virginia organize to make a statement on January 28th, Teucke says that the action is helping to show people that collective action by teachers can actually help make a difference.

“It’s giving people a way to get involved without joining the union because some of them don’t think it’s worth their dues,” says Teucke. “The day of action is making people who have never thought about what their labor rights are and what their laws are they are starting to get involved in an activist way. For the first time, these teachers are starting to contemplate some of those things about what it means to collectively bargain.”

In the Richmond public schools, Sarah Pederson, whose husband is also a teacher, struggles to get by.

“When we first got into teaching, this is great, we both like kids, we are gonna be teachers and we are gonna be on a school calendar, what a great lifestyle to raise a family,” says Pederson.

“I’m one of 5, I always thought that we would have a large family, but when I look at my daughter” pauses Pederson as she gets choked up,  “I can’t imagine giving her a brother or a sister. We are probably only raising one child because we can’t afford another kid.”

“We can’t have the family that we wanted because we are helping to raise other people’s kid,” says Pederson.

“A lot of teachers think what is one day going to do, but when they spend a little bit of time talking and thinking about it and they realize that not even this has happened in Virginia before. If we can pull off one-day, what else can we pull off?” says Pederson.

As more teachers like Pederson share their stories, they are finding increasing community support. A recent poll conducted by the Virginia Commonwealth University shows that 63% of Virginians support raising taxes to increase funding for education; an 11% increase than the year before the #RedforEd strike wave captured the nation’s attention when only 53% of Virginia supported raising taxes for education.

The day of action comes as Virginia is increasingly becoming Democratic. Democratic Governor Ralph Northam holds the Governor’s Mansion while Democrats are only one vote short of a majority in the Virginia House of Delegates, and in the State Senate, Republicans hold a mere 2-seat majority.

With many GOP state legislators fear losing re-election in an increasingly Democratic Virginia, Northam has proposed to raise pay for teachers by 5% and has proposed using a one-time windfall in tax revenue of $600 million generated by changes in the federal tax code, to invest $269 million in public education.

However, teachers say that $269 million is not nearly enough when the state is able to offer Amazon CEO Jeff Bezos, the richest man in the world, $573 million in tax breaks to move one of Amazon’s new headquarters to Crystal City, Virginia.

“His $269 million is a huge joke among us in Virginia Educators United,” says VEU’s Brian Teucke. “In order to restore funding to pre-recession levels, he would need to invest close to a billion dollars.”

While Virginia Educators United organizers recognize that they still have a long way to go in achieving their goals, they increasingly feel like momentum is on their side.

“Already, there has been a shift in the perceptions because we have been bombarding the social networks, the local media, and teachers have been going to town halls and wearing their red, going to their town boards and saying this needs to be fixed,” says Cheryl Binkley.

“The idea that a group of teachers like the folks in Virginia Educators United could suddenly in nine months put out the kind of PR, the kind of graphics, and videos and testimonials that they’ve done that rivals what Bill Gates paid Peter Cunningham $5 million a year to do is just mind-blowing and they do it while they are still teaching every day and putting their kids to sleep at night is amazing, ” says Binkley.

As images of teachers filling the streets of Los Angeles fill the Facebook feeds of teachers in Virginia, Virginia Educators United organizers say they are seeing a sudden surge of momentum for the walkout on January 28th.

For a Southerner like Cheryl Binkley, who’s been loyal to the labor movement her entire life, she says she something big.

“I’m seeing a sea change,” says Binkley. “I think for once teachers in Virginia are going to be able to hold their heads up”.