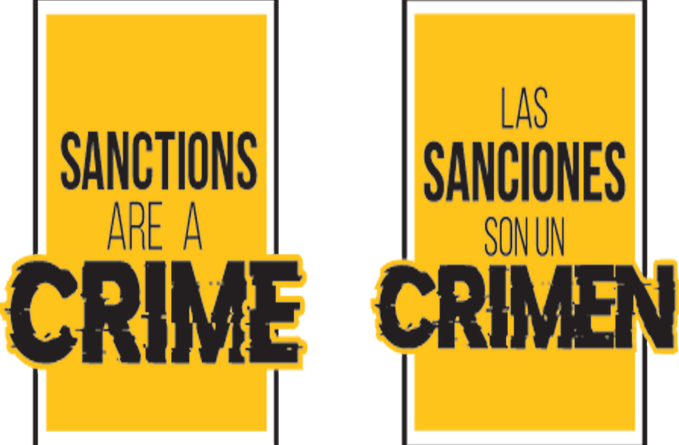 It is well known around the world that the United States, together with the European Union, maintains a policy of “sanctions” and economic blockade against Venezuela. Since the time of former US president Donald Trump, they themselves called for a “maximum pressure strategy” in Venezuela. The government of Washington, whether Democrat or Republican, does not hide its intention of achieving “regime change” in Venezuela through this strategy, that is, to overthrow the elected government of Venezuela and make President Nicolás Maduro leave office by force. All of this is crystal clear.

Now, what is the effect of these sanctions, which in international law are known as “unilateral coercive measures” and thus are illegal? There are those who maintain that the measures adopted by Washington do not affect the population but only government officials. And this is the basis for the support of this US strategy by the Venezuelan extreme right. Many media outlets, both inside and outside Venezuela, continuously repeat this narrative, thus contributing to the anti-Bolivarian Revolution, anti-Venezuela script.

This is why Últimas Noticias decided to consult its readers to assess how the Venezuelan population perceives the effect of the sanctions. From Monday, April 19 to Thursday, April 22, the Venezuelan newspaper held a digital poll on its website www.ultimasnoticias.com.ve and its social media accounts, asking the following question:

“How do the sanctions and blockade imposed by the US affect Venezuelans?”

The response options were: They affect everyone; They affect some; and They do not affect anyone. The intention was to collect, in broad terms, how the common people of the country gauge the impact that this pressure has had on Venezuela.

What do people say?

The result obtained are presented below: 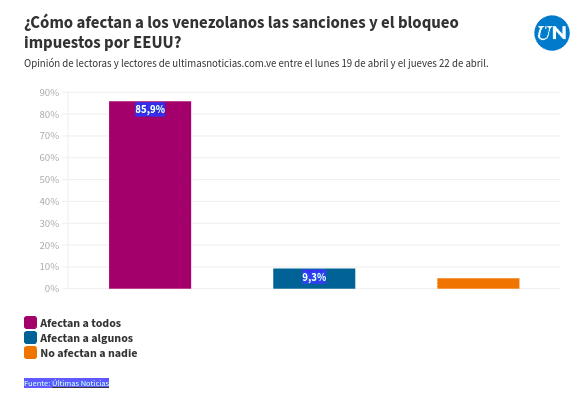 RELATED CONTENT: Datanálisis Reveals Results of Survey About Illegal US and European Sanctions

Hence, it can be affirmed that about 9 persons out of 10 perceive the sanctions and the blockade to have a real impact on the entire population. Around 10% of people holds the idea that, although this impact exists, it only affects some people and is not a general matter of concern, while a small minority, less than 5% [remember US 1%?], do not believe that there is any effect on the population.

If the results are grouped into positive and negative responses, the proportion grows as follows: more than 95% recognize that sanctions have effects on the population, be it on all or some; while less than 5% deny that the sanctions have any effect. 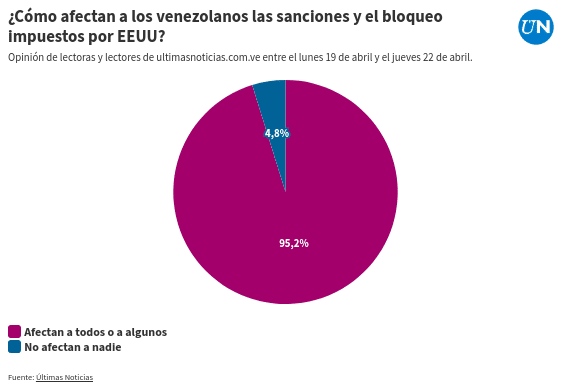 Claims vs reality
Last month, Venezuelan Deputy Minister for Anti-Blockade Policy, William Castillo, explained in a forum that a narrative has been constructed with five main axes, the intention of which is to invisibilize the reality that the blockade has devastated the economic capacities of Venezuela. He called those five axes the “Five myths about the blockade of Venezuela”:

Myth 1: “There are no sanctions”

Myth 2: “They are only against officials and do not affect the people”

Myth 3: “The country was already very bad before the sanctions”

Myth 4: “Sanctions are not responsible for the crisis, corruption is”

Myth 5: “The US would lift sanctions if there are ‘fair, free and competitive elections.'”

However, reality has outgrown this cover-up discourse. The results of the Últimas Noticias poll confirm this. But it is not just the readers of Últimas Noticias. Coincidentally, part of a survey inquiring about the same issue, which was carried out by the consulting firm Datanálisis, was also released this week. Let us take a look at the graph: 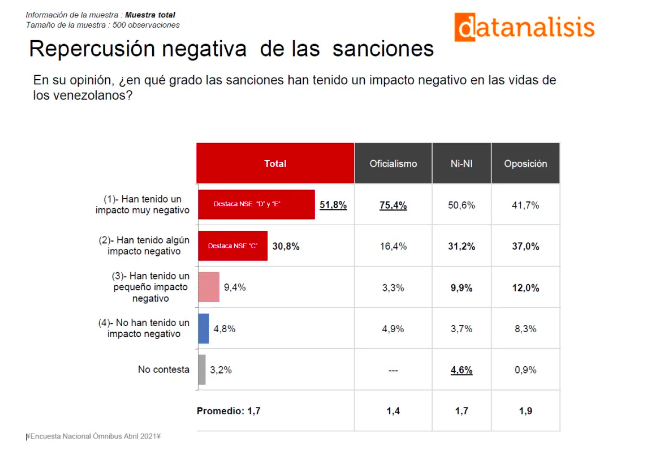 Economist Francisco Rodríguez posted this graph on his Twitter account and described it like this: “Four out of five Venezuelans think that the sanctions have had a negative and important impact on people’s lives. More than half think that this impact has been very negative. Less than 5 percent say that they have had no impact. ”

RELATED CONTENT: IMF Refuses to Provide Assets to Venezuela: What’s Behind It?

The Datanálisis results match the Últimas Noticias poll. More than 90% of Venezuelans believe that the sanctions have an impact on the population. And both polls show strikingly similar results on the negative response—those who deny the impact of the sanctions represent only 4.8% of the population.

The impact is real, and devastating
People are right in stating that the sanctions and the blockade affect the entire population.

Foreign Affairs Minister Jorge Arreaza said in a recent interview that “if Venezuela did not have its resources blocked [abroad], we would have bought the 30 million vaccines that the country needs three months ago.” The blockade and theft of resources from Venezuela through the so-called “sanctions” is something very real and this is just one example of the impact.

Economist Pasqualina Curcio estimates the impact of the sanctions, only between 2016 and 2019, at US $194 billion. She explains that this is equivalent to approximately 16 months of national production, and that with that money Venezuela would have been able to pay the entire external debt, which according to the Central Bank of Venezuela (BCV) is US $110 billion. She also affirms that this money could be used to import food and medicine for 45 years. In the article “Impact of the economic war in Venezuela,”  published by Últimas Noticias, Professor Curcio explains:

“These losses can be broken down as follows: US $25 billion correspond to money and assets that have been looted from us, while the remaining US $169 billion represent what our economy has lost through lost production from 2016 to 2019 as a consequence of the attack against PDVSA (US $64 billion) and the attack on the bolívar (US $105 billion).”

But this is not just an inside view of Venezuela. In 2019, the Center for Economic and Policy Research (CEPR), a respected research institute based in Washington, USA, published a report signed by economists Mark Weisbrot and Jeffrey Sachs entitled “Economic sanctions as collective punishment: The case of Venezuela” (available on the website of the organization, cepr.net)

These academics recounted the different instances in which the US imposed sanctions on Venezuela and the corresponding impact, which they define as a “collective punishment” inflicted on the entire population with the intention of collapsing the country’s economy, so that it in turn provokes the “regime change” that the US wants. They highlight that the Executive Order signed by Trump in August 2017, which prohibited the Venezuelan government from borrowing from the financial markets of the United States, seriously harmed oil production in Venezuela. The report states:

“Following the executive order of August 2017, oil production plummeted, falling by more than thrice the rate of the previous twenty months. This was a consequence of the loss of credit and, therefore, of the inability to pay for maintenance and operations, as well as making the new investments necessary to maintain production levels. This accelerated rate of decline in oil production would imply a loss of $6 billion in oil revenues for the following year.”

They also point out that “the loss of so many billions of dollars in foreign currency and the loss in government revenue constituted the main push that led the economy to go from high inflation to hyperinflation, when the sanctions were implemented in August 2017.”

Human rights
Even the United Nations (UN) has pointed out the impact that sanctions and the blockade have on the Venezuelan population. On March 23, the UN Human Rights Council approved a resolution condemning these measures.

In addition, in February, a United Nations Special Rapporteur for Human Rights, Alena Douhan, visited Venezuela, and prepared and published a preliminary report that will later be expanded and presented to the Human Rights Council in September this year. In the preliminary report, Douhan describes how the sanctions function:

“Venezuelan assets frozen in banks in the United States, United Kingdom and Portugal amount to $6 billion. It is reported that the purchase of goods and payments from public companies are blocked or frozen. The private sector, non-governmental organizations, universities, sports clubs and citizens of Venezuela denounce the rejection or reluctance of foreign banks to open or maintain their bank accounts, including those of correspondent banks in the United States and Europe; difficulties in obtaining visas and buying tickets; the need to act through agents from third countries; and the need to pay additional insurance costs.”

It also describes the situation that Venezuelans experience as a result of the measures dictated by Washington:

“They have caused a steady growth in malnutrition in the last 6 years, with more than 2.5 million people severely food insecure. Mechanisms to cope with this situation include reducing the number of meals per day (1 or 2 instead of 3); reduction of the quantity and quality of food; decapitalization/sale of household goods to eat; and reducing spending on health, clothing, and education; with a corresponding increase in family crises, tensions, violence and separations; child labor; prostitution; participation in the gray economy; criminal activity, including drug and human trafficking; forced labor; and migration.”

Venezuelans [and international audiences] need to understand that the situation of siege that Venezuela is experiencing by the world’s leading economic and military power not only has serious real effects, as most people perceive, but that it is a perverse operation to punish an entire population until the biggest imperial power of all times be able to expel a government that does not suit the interests of the US and Europe.

US academic Mark Weisbrot explained this behavior of his own country in a 2019 article published on the cepr.net website:

“After the Sandinistas triumphed [in Nicaragua] in 1979, the United States waged a bloody war to take back the country using a terrorist paramilitary force called the Contras that regularly murdered civilians. President George HW Bush made it clear during the second [Nicaraguan] election in 1990 that, although he was not God, he would continue to punish Nicaraguans with a trade embargo and war if they did not get rid of the Sandinistas. Tired of war, hyperinflation and economic collapse, Nicaraguans voted in favor of the opposition: the Sandinistas lost.”

Obama, Trump, and now Joe Biden are pursuing a strategy as old as it is deplorable. And it is not about applying “maximum pressure” only to the government. This pressure is suffered by the country’s economy and the entire population.

Featured image: Illegal US sanctions have a huge negative effect on the entire Venezuelan population, according to latest Últimas Noticias survey. File photo.