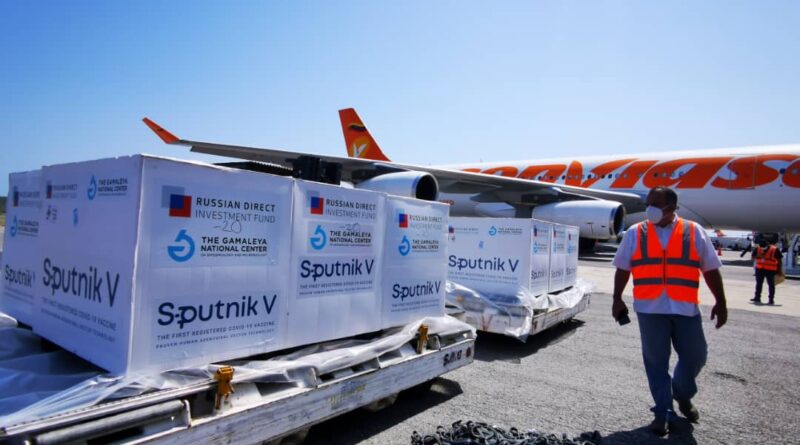 On Saturday, April 24, the fifth shipment of the Russian vaccine Sputnik-V arrived in Venezuela. The shipment, containing 80,000 doses, arrived at the Simón Bolívar International Airport in Maiquetía, La Guaira state. To date, 380 thousand doses of the vaccine have been received by Venezuela.

This strengthens the National Immunization Plan that started on February 18 with two vaccines: Sputnik-V from Russia and Vero-Cell from China.

Venezuelan Minister for Health, Carlos Alvarado, was in charge of receiving the shipment that flew directly from Moscow in a CONVIASA airbus.

“These doses will be administered to front-line medical workers and to the elderly in our country,” said Alvarado.

Likewise, the national airline CONVIASA, sanctioned by the US since February 2020, continues to soar through the skies bringing humanitarian aid and vaccines to Venezuelan people.

RELATED CONTENT: Vaccines Sent by the United States to Mexico are from Contaminated Plant

The first COVID-19 vaccines arrived in Venezuela on February 15. It was a batch of 100,000 doses of the Sputnik-V vaccine. On March 6, another 100,000 arrived. The third flight landed in Maiquetía on March 29 with 50,000 doses and on April 14, the shipment was completed with the second doses.

Now, on April 24, the fifth shipment of Sputnik-V arrived from Russia, as part of an agreement for 10 million doses signed between Russia and Venezuela.

“With these international alliances we are bypassing the unilateral coercive measures imposed by the US government,” said Alvarado.

On his part, the Russian ambassador to Venezuela, Sergey Mélik-Bagdasárov, praised the close relations between the two nations.

“For us, it is important that this vaccine comes regularly,” said the ambassador. “It strengthens the Venezuelan healthcare system; it gives new life, new hope and new signs of total solidarity between the governments of President Nicolás Maduro and President Vladimir Putin.”

Mass vaccination advances
Until now, Venezuela has addressed three prioritized sectors of the population for mass vaccination—medical personnel, teachers and staff engaged in education, and the elderly.

Apart from Sputnik-V, another COVID-19 vaccine, Vero-Cell manufactured by the Chinese company Sinopharm, is being used for mass vaccination in Venezuela.

In total, the country has received 880 thousand doses of these two vaccines, a part of which has also been donated to other members of ALBA-TCP.

The safest in the world
Recently the Gamaleya Institute, creator of Sputnik-V vaccine, published a report updating the level of efficacy of the preparation to 97.4%.

This statistic confirms that the pioneer in the fight against COVID-19 is the most effective in the world.

More than 60 countries have authorized the use of Sputnik-V, despite the campaign of hatred and discredit promoted by Washington and the mainstream media it controls.

The Russian vaccine has also established itself as one of the few that produces specific antibodies and does not cause serious side effects.

Sputnik-V is composed of a vector with human adenoviruses and does not carry any SARS-COV2 virus load, but the antibodies generated in the body can recognize and neutralize the novel coronavirus. The vaccine is applied in two doses (Ad-26 and Ad-5), administered 21 days apart.

Featured image: Fifth shipment of Russian vaccine Sputnik-V arrived in Venezuela this Saturday, April 24. Photo courtesy of the Office of the Vice President of Venezuela.