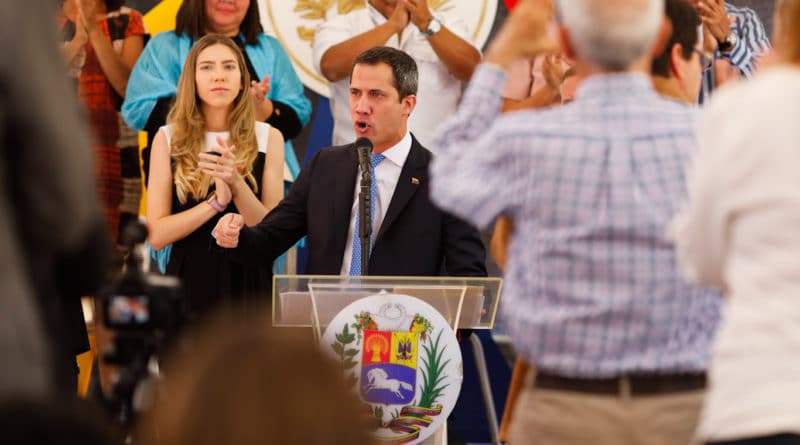 The IMF refused a COVID–19 emergency loan to Venezuela unless it agreed to overthrow President Maduro and installs the Washington-backed Juan Guaidó.

Earlier this month, the International Monetary Fund (IMF) blocked a request from Venezuela for an emergency loan to deal with the COVID–19 pandemic on the grounds that President Nicolas Maduro “lacked recognition.” “IMF engagement with member countries is predicated on official government recognition by the international community, as reflected in the IMF’s membership. There is no clarity on recognition at this time,” a spokesperson for the international banking organization said. In fact, around 150 countries recognize Maduro, including the vast majority of UN member states. Indeed, the UN itself has endorsed him, even placing Venezuela on the Human Rights Council. Crucially, however, the United States government has not.

Nevertheless, “help” might be on the way. That is if U.S.-backed self-declared president Juan Guaidó is to be believed. Yesterday he announced that he had secured a $1.2 billion dollar loan from the organization on one condition: that Maduro steps down and allows what he calls an “emergency government” to take control of the country. Guaidó was recently given a column in The Economist magazine.

The IMF is refusing to give Venezuela a loan to buy medical eqipment to fight #COVID19 unless it overthrows its government and installs their preferred candidate.

What a time to be alive. https://t.co/odrvdqfrR1

Guaidó’s pronouncement comes amid the news of a former military general, Cilver Alcala, confessing to organizing a military coup with Guaidó. Alcala has placed himself under the protection of the U.S. Drug Enforcement Agency.

The Venezuelan government, meanwhile, has been more preoccupied with its response to COVID–19. The country has a relatively small 119 confirmed cases, with three deaths reported so far. Even before any reported cases, Maduro declared a health emergency, canceling many foreign flights and prohibiting crowds. On the day of the first positive case, public buildings like schools, theaters, and restaurants were shuttered, and wearing a mask in certain locations became mandatory. The government organized a huge online database and website, where any person worrying they were showing symptoms could inform authorities. Over 20,000 sick people were visited in their homes by medical professionals. This was made possible by Venezuela’s Cuban-built nationalized healthcare system. Thousands of Venezuelans in the U.S., between 92 and 99 percent of whom voted against Maduro in the 2013 elections, are flocking back to their country of birth in the knowledge that his response has been far more reassuring than Trump’s.

Although under punishing U.S. sanctions that American UN Special Rapporteur Alfred de Zayas estimates have killed over 100,000 people, the country has nevertheless been showered with help from its allies. Cuba, for example, has sent 130 more doctors and 10,000 doses of lifesaving Interferon Alpha 2b, an antiviral known to help combat the virus. And this weekend a huge shipment of Chinese supplies, including over 500,000 test kits, 5 million facemasks, and 70,000 infrared thermometers, arrived in Venezuela.

Nevertheless, the economy is still in dire straits and has been for many years, not least because of sanctions and a refusal from the international finance industry to cooperate. The IMF headquarters are located in central Washington, D.C., barely a stone’s throw away from the White House. The physical distance between the two buildings is reflective of how closely the IMF and the U.S. government work together. Indeed, the United States holds unique veto power over the organization. All significant IMF actions require at least 85 percent agreement. But the U.S. holds 17.5 percent of the votes. Critics of the organization, like Martin Honeywell, Andre Gunder Frank and Michel Chossudovsky, claim that its job is to carry out the financial interests of Washington by keeping developing countries poor, controlling them through “financial terrorism”; plying countries with huge, usurious loans on the proviso that they privatize their assets, thus sinking their economies and making it impossible for them to accrue enough wealth to ever pay it back. An example of this was Ecuador, who, by 2005, was forced to spend 47 percent of its entire income paying back enormous interest on loans. This ensured that countries in the Global South could not take an independent, progressive path.

The IMF worked closely with the U.S. government in 2002 in briefly overthrowing Maduro’s successor, Hugo Chavez. Just hours after what appeared to be a successful coup, its Director of External Relations said they were willing to give new dictator Pedro Carmona unlimited funds: “we stand ready to assist the new administration in whatever manner they find suitable,” he said. Carmona was deposed the next day.

Maduro, Chavez’s handpicked successor came to power in 2013 and was re-elected in 2018 in some of the most intensely internationally monitored elections in world history. Despite the unanimous positive feedback from monitors, the U.S. government preemptively refused to recognize the results, eventually declaring Juan Guaidó, head of a small, far-right opposition party, the legitimate ruler of the country. Guaidó has attempted to seize power by force a number of times but has not been successful. A December poll found him to have a 10 percent approval rating and a 69 percent disapproval rating.

After an unsuccessful April coup attempt, a number of Guaidó’s co-conspirators fled to the US where they believed they would be treated well. In fact, they were arrested for illegally entering the country and have been incarcerated in an ICE detention camp ever since.

Despite his own very low approval ratings, forces in Washington have not managed to dislodge President Maduro from power. It is unlikely, therefore, that he or the Venezuelan people will accept the IMF number crunchers’ offer. Beware of geeks bearing gifts.