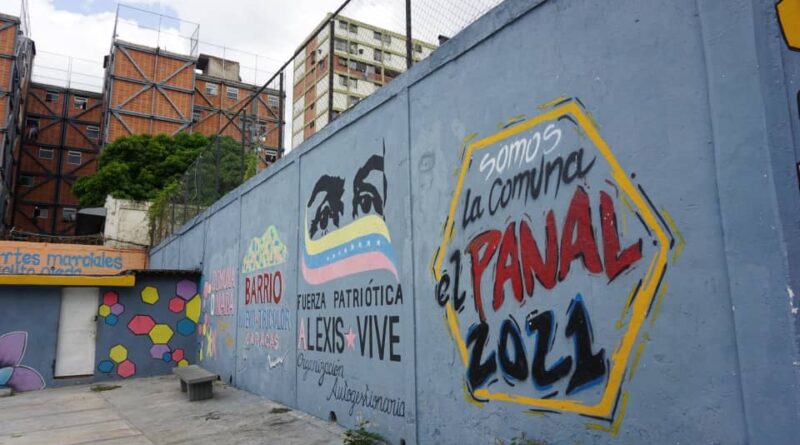 Third episode of VA’s “In Commune” series, focusing on the combative Panal 2021 Commune in Caracas.

Outside of Venezuela, communes are a little known aspect of the Bolivarian Revolution, yet the development of the communal state is integral to the vision of 21st century socialism laid out by former President Hugo Chavez.

In this series, In Commune, Venezuelanalysis will explore different experiences of rural and urban communes to help better understand what these highly controversial bodies mean, how they have been put into practice, and what they could signify for the continuity of the Bolivarian Revolution in the current situation of political and economic imperialist aggression.

This chapter of In Commune explores the Panal 2021 Commune, which lies in the heart of the Caracas parish of 23 de Enero, a community known for its combative participation in the toppling of the dictator Marcos Pérez Jímenez and its important role in the resistance against the neoliberal governments of the 1980s and ‘90s. This commune was forged with the ideological discipline and organization of a local collective, turned national popular movement, now known as the Alexis Vive Patriotic Force. The fusion of this revolutionary popular movement with the proposal of the communes brought forth a unique experience of community organization and a necessary example of a complex and integral system of communal economy.

The Alexis Vive Collective was founded in the parish of 23 de Enero in honor of Alexis Gonzaléz Revette, a revolutionary activist from the same community who was assassinated by the opposition-controlled Metropolitan Police during the failed coup d’etat against President Hugo Chávez Frías. At the time of their foundation, the collective focused their energies in reviving their community which continued to be deeply affected by the devastation caused by decades of neoliberalism..

For the collective, the revolution had to start with education, volunteer work, recuperation of public spaces and self-managed production. Bárbara Martínez, member of the Alexis Vive Patriotic Force and the Panal 2021 Commune, recalls how the first steps involved washing the stairways of the characteristic apartment blocks and asking their neighbors for contributions, which would then be used to finance other productive projects and social activities.

In 2006, just a short time after the ideas of communal councils and self-government entered the debate within the Bolivarian Revolution, the Alexis Vive Collective founded the Panal 2021 Commune. Alexis Vive founder and communard Robert Longa explains that the name “El Panal” (beehive) is a metaphor with a class-based perspective, referring to the collective construction of worker bees, but also the defense of the community and the revolutionary cause.

The commune quickly caught the eye of Chávez and many state institutions for its capacity for self-organization. Their positive relation with the government led to financing for several key community projects, as well as communal production. The projectes included a sugar packaging plant, a textile factory, a community radio station and a bakery, all of which continue to function today.

As one of the first communes to be founded, the Panal 2021 Commune developed a unique organizational structure, different from the structures established in the law of the communes, basing its legitimacy on popular participation.

In the commune, the “blocks” or apartment buildings are organized in Panalitos, composed of 10 to 12 militants of Alexis Vive. the Panalitos play an essential role in maintaining a unified vision from within the communal councils, as well as the planning, organization and implementation of community policies and projects.

The success and effectiveness of the Panalitos in 23 de Enero communities led to the creation of Panalitos outside the territory of the commune and eventually across the country. The multiplication of these embryos for the promotion of communal organization led to the expansion and transformation of Alexis Vive from a local collective into a national movement, the Alexis Vive Patriotic Force.

The Panal 2021 Commune’s main decision making body is the Popular Patriotic Assembly. This space is open to participation of all communal councils, Panalitos and other forms of community organization which are empowered to make proposals as well as approve budgets and projects.

The commune possesses a Comunal Bank where all resources are deposited and distributed. However the Panal 2021 Commune saw the need for a body which could provide a more strategic and integral organization of resources based on community needs and opportunities, for which they created the Office of Planification and Production. This office is dedicated to strategic planning for investment in productive projects and distribution of resources for local social programs. All proposals are presented for the approval of the Popular Patriotic Assembly.

The death of Chávez and the subsequent escalation of US imperialist aggression took its toll on the government and the Venezuelan population. Venezuelan popular movements and communes were not spared from this siege. However, Alexis Vive, as an organization with a history of resistance under difficult and extreme circumstances, was able to draw from its roots to push forward the commune in its most complex moments.

As prices began to soar and basic products quickly became scarce, combined with the social phenomenon of massive smuggling and speculative re-selling, the Alexis Vive and Panalitos militants began to distribute sugar, bread and other basic staples directly door to door at fair and regulated prices. Bárbara Martínez explains that this strategy was essential for the resistance of the community during this period of crisis.

As the economic and political situation in Venezuela continues to become ever more complicated, the Panal 2021 Commune continues to develop new strategies for resistance and growth, confident that in the commune and the communal state lies the solution to the crisis and the path towards a more humane and just society.

Previous episodes of “In Commune”