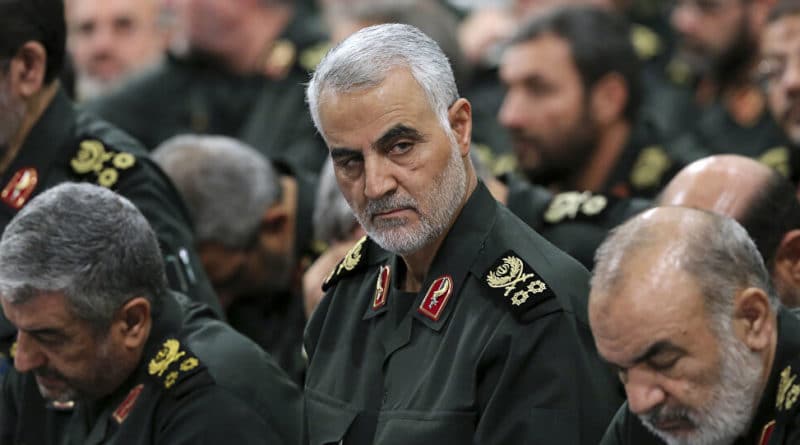 Qasem Soleimani, commander of the Revolutionary Guards’ elite Quds Force and one of the most respected figures in Iran, was killed in a US drone strike in January during a goodwill visit to Iraq.

Authorities in Iran have approved a measure to ask Interpol to put US President Donald Trump on its international Red Notice of wanted persons over the assassination of General Qasem Soleimani, Iranian media including Mehr News and the Fars News Agency have reported, citing judicial officials.

“It was possible to identify 36 persons who participated in preparations for and were involved in the assassination of Qasem Soleimani, among them political and military figures from the United States and other countries,” Ali Alqasi-Mehr, Tehran’s prosecutor-general, said in a statement on Monday. “At the top of the list is US president Donald Trump,” he added.

RELATED CONTENT: Venezuela Submits New Documents Against US in The Hague

According to the official, judicial authorities adopted a resolution to bring these persons to justice and to appeal to Interpol to issue red notices against them. If approved, Interpol would require law enforcement agencies in other countries to facilitate the search for and arrest of the requested suspects.

Iran’s charges against Trump and others include ‘murder’ and ‘terrorist acts’, charges which carry a maximum penalty of death under Iran’s criminal code. According to Alqasi-Mehr, Iran would pursue Trump’s prosecution even after the expiry of his term as president.

Later Monday, an Interpol spokesperson told Sputnik that the organization would not consider any Iranian request for President Trump’s arrest, citing agency rules. “In accordance with Article 3 of Interpol’s Constitution, ‘it is strictly forbidden for the Organization to undertake any intervention or activities of a political, military, religious or racial character.’ Therefore, if and when such requests are sent to the general secretariat…Interpol will not consider requests of this kind,” the spokesperson said.

Interestingly Interpol did not use the same excuse when issuing a red code against the Venezuelan diplomatic envoy, Alex Saab, in charge of procuring food in international markets to avoid the death of millions of Venezuelans, the main goal of US illegal sanctions. Saab was detained in Cape Verde under a US judicial warrant alleging corruption when in reality the US regime is trying to suffocate Venezuela.
US Assassination of Senior Foreign Leader
Soleimani was assassinated in a US drone strike in Baghdad, Iraq on January 3 during a goodwill trip to try to normalize Iran’s relations with regional adversary Saudi Arabia. His death prompted Iran to launch missile strikes on two US bases in Iraq, although Tehran warned its Iraqi allies of the strikes ahead of time. Nevertheless, despite causing no fatalities, the strikes resulted in over 100 US servicemen and women reporting traumatic brain injuries.

In late January, a Business Insider Poll found that one in four Americans believed Trump should be tried for war crimes by the International Criminal Court over Soleimani’s killing. Meanwhile, as many as 55 percent of Americans said they believed Soleimani’s assassination made their country ‘less safe’.