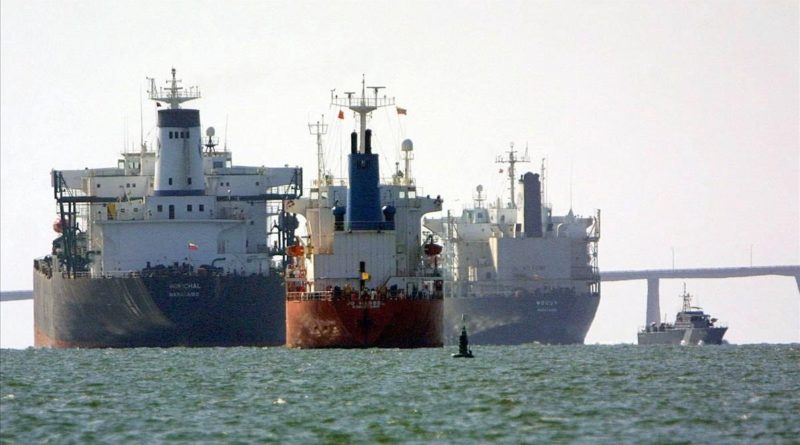 The scenario of economic-financial-commercial suffocation that the United States government has imposed on the Bolivarian republic of Venezuela is one more piece of the puzzle in the unrestricted war strategy it is carrying out against the country in the Caribbean Basin.

To be more precise, it has repercussions on the navigation chart of Venezuelan ships or those that have commercial and other relationships with the Venezuelan state and private companies. To support such a suffocating agenda, the US Navy has a multiple deployment operation in all parts of the planet, which works as a military and mobile police stationed for naval and military operations of different types.

“By sea we can get to the place more quickly, stay there for longer, carry everything we need with us and we do not have to ask anyone for permission,” reads the 21st Century Cooperation Strategy for the Naval Force of the gringo Navy.

The full-spectrum doctrine of the Pentagon provides immunity for itself and for its most trusted allies, and a military restriction on everything that sails with flags sanctioned by the Treasury Department or that threatens in a military way its outlined plans, as well as those of the White House.

Venezuela has been harassed in recent years with this strategy, which, with the blockade dictated by Washington and the consequences it provokes, plus other operations in favor of “regime change”, draw a fence on the high seas and on the shores of the Caribbean coast.

The main objective: the oil industry

Recently, Reuters agency reported that cargoes of oil ready to be marketed “have been trapped” for almost two months on the high seas because “world refineries shun oil from the South American country to avoid falling into US sanctions, according to industry sources, PDVSA documents and shipping data.”

At the same time that the Treasury Department is blacklisting ships and merchants involved in the trade and transportation of Venezuelan oil, it is threatening to add more to its list of “sanctioned” entities.

“At least 16 oil tankers carrying 18.1 million barrels of Venezuelan oil are trapped in waters around the world, while buyers avoid them to avoid sanctions. That equates to almost two months of production at Venezuela’s current production rate.”

The agency says that some of the boats “have been at sea for more than six months and have sailed to various ports but have been unable to unload. Oil cargoes are seldom loaded without a buyer. Those who are in the water without having anyone to buy them generally sell at a discount.”

The financial burden on each oil tanker adds up to large losses as the daily delay in unloading crude continues. The cost of a ship that carries Venezuelan oil is at least $ 30,000 a day.

Oil companies that have PDVSA as a client have been unable to find a buyer due to unilateral coercive measures. “Even long-standing PDVSA clients are struggling to complete transactions that are allowed under sanctions, for debt repayment or food exchange,” an executive told Reuters on condition of anonymity.

This is a critical situation for Venezuelan exports, at a time when most oil-producing countries continue to struggle to trade their high inventories in an oversupplied market.

All this helps the United States to reduce the appetite of many buyers for Venezuelan oil.

Basically what the Donald Trump government has achieved is to mount a naval siege on the high seas on the Venezuelan crude oil trade, preventing the state led by Nicolás Maduro from stocking up on foreign exchange to supply essential goods and services to its population, while undermining the oil industry managed by PDVSA.

That goal was clear from the start, when Trump decided to issue an executive order last year that deepened the picture of economic, financial and trade “sanctions” against Venezuela. The latest events just confirm that thesis.

A blow to Venezuela’s commercial and technological cooperation

A month ago, when the first ships from Iran were crossing the Atlantic to the Caribbean coast to supply gasoline and technology to the Venezuelan oil industry, the United States spokesmen had threatened to prevent them from unloading through US Navy harassment against the Iranian tankers.

But it is one thing to intimidate a single country and another to do it against two, especially if one of them controls the Strait of Hormuz, the main commercial oil artery of the world, where one in five barrels of oil in the world pass through daily. That is why the freighters arrived to dock at their destination without problems beyond poorly executed psychological operations.

RELATED CONTENT: Venezuela: China’s Support is Essential Against the US Blockade

In this case, due to the emerging dynamics in which there is a rising bloc that challenges Anglo-imperial hegemony, effectiveness subordinated to Washington’s interests in relation to the sanctioning strategy was not permitted.

But what happens with other countries and companies worldwide is a very different case. Take, for example, the Venezuelan crude freighters that set sail for Malaysia, Singapore, Indonesia or Togo, countries where the US presence is very strong and have been unable to buy oil produced by PDVSA as a result of unilateral coercive measures by the White House and the naval surveillance of the Navy in those latitudes.

It is in these cases that coordination between the Navy and the United States Department of the Treasury is imposed, even if informally.

Due to this strategy, just until February 2020, Venezuela calculated $ 116 billion in losses from the blockade.

In view of the latest events, we can conclude that the much-announced naval blockade against Venezuela sponsored by the Trump administration has been unofficially deployed. It no longer works frontally as in 1902 , in which German, English and Italian ships encircled the country then chaired by Cipriano Castro, or even as they did against Cuba in the 1960s, when the United States determined that island sovereignty it could not be erected in its “backyard”.

A new phase of escalation in the naval blockade began in early April with the “anti-drug operations” deployed in the Western Hemisphere of the US Navy, opening a space for large-scale psychological operations in the Caribbean and for the coordination of forces and intelligence of the Southern Command with partner countries of the Pentagon, especially Colombia and Brazil.

In this context, the navigation of a US Navy destroyer ship near the Venezuelan coasts on Tuesday, June 23, must also be understood, which General Vladimir Padrino López, Venezuelan Defense Minister, describes as “an act of provocation ” .

Padrino López warned that if US ship operations occur in Venezuelan waters, there will be a “forceful” response from the Bolivarian National Armed Forces. “Do not dare to navigate in our jurisdictional waters with your war ships, to exercise military operations,” added the general.

Although provocations are a tactic that the US army often uses against its adversaries, crossing foreign maritime boundaries not only in the Caribbean but in other parts of the world (such as the South China Sea or the Persian Gulf itself) generally gringo generals authorize this type of operations to collect intelligence information and disturb the opponent. Under what objectives: military, commercial or even both?

Undoubtedly, the pressure of the Southern Command and its destroyers prowling around the Caribbean, combined with the strategy of the Treasury Department, draw a fence on high and on the shores of the coasts that puts the Bolivarian Republic on alert and economically injures the majority of Venezuela’s population.