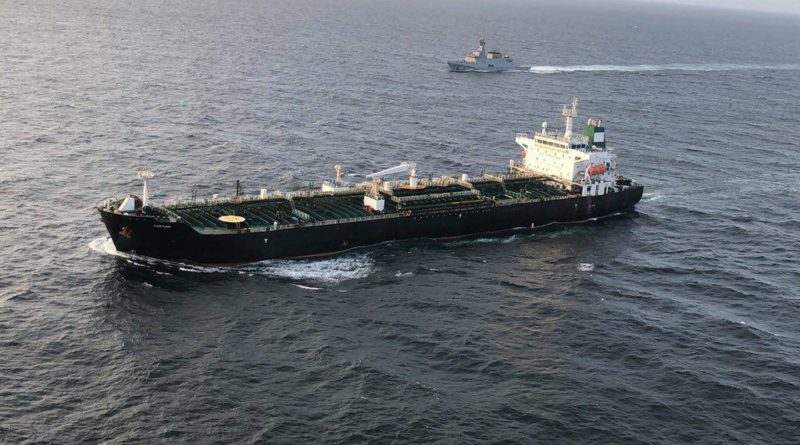 The five Iranian tankers are estimated to carry enough gasoline to supply Venezuela for 50 days.

Mérida, May 24, 2020 (venezuelanalysis.com) – The first of five Iranian fuel tankers arrived in Venezuela on Sunday.

After entering Venezuelan waters on Saturday evening, the Fortune was escorted by the Venezuelan navy and air force and is expected to dock Sunday night in the oil terminal of Puerto Cabello in Carabobo State, where it will supply the El Palito refinery.

With four more tankers due to arrive in the coming days, Caracas and Tehran have defied threats from Washington. Several news outlets reported that US officials are mulling actions in response to the Iranian shipment, while President Donald Trump claimed to have Venezuela “surrounded.”

Last month, Trump ordered the mobilization of US naval assets to the Caribbean in an “anti-drug” operation targeting Venezuela and described as one of the largest military deployments in the region since the 1989 invasion of Panama. The US leader had previously threatened Venezuela with a naval blockade.

The White House has yet to comment on the Fortune’s arrival. OAS Secretary General Luis Almagro and Venezuelan opposition leader Juan Guaido – both staunch US allies – condemned the fuel shipments as an “unacceptable provocation” that should “alarm” the region.

For his part, Iranian President Hassan Rouhani has issued repeated warnings that Iran would retaliate against any threat to the vessels.

“The energy cooperation is based on the productive development of the industry in both countries […] for the benefit of our peoples,” he said, while also blasting US sanctions and their consequences for the Venezuelan oil industry.

With both Iran and Venezuela under punishing US sanctions regimes, the incoming shipment contains about about 1.53 million barrels of gasoline and alkylate, according to Reuters. The gasoline supplies are estimated to cover Venezuela’s reduced demand under quarantine for an estimated 50 days, while alkylate supplies will improve domestic refining capacity.

US sanctions blocking imports of fuel, diluents and spare parts have generated widespread gasoline shortages, with most of the country’s refineries currently out of operation.

Since 2017, the Trump administration has imposed crushing economic sanctions against Caracas, including an oil embargo as well as a blanket ban on dealings with Venezuelan state entities.

In recent months, the US Treasury Department has imposed secondary sanctions on two affiliates of Russia’s Rosneft. The Russian energy giant had been carrying up to 60 percent of Venezuela’s crude output in addition to supplying diesel and gasoline. The measures forced Rosneft to liquidate its Venezuela activities and transfer assets to a Russian state-owned company.
Following Rosneft’s departure, Caracas turned to Tehran to provide fuel as well as technical assistance in reactivating Venezuela’s largest refinery, which has been offline since last year’s nationwide blackouts. The Trump administration has likewise threatened Iran over its technical air corridor to Venezuela, calling on other countries to suspend Iranian overflight rights.