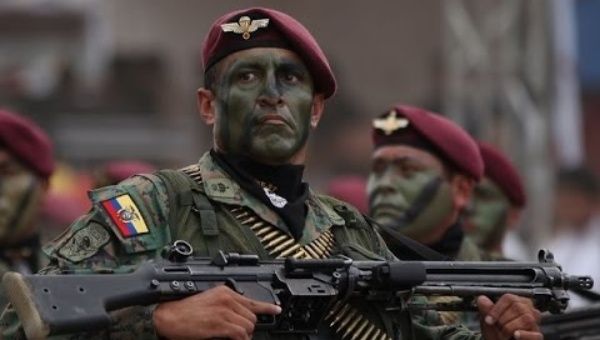 Israeli officials have told Ecuadorian media that there is now a ‘flourishing relationship’ between the two countries.

Ecuador’s minister of Defense Oswaldo Jarrin confirmed Thursday that ‘elite’ units of Ecuador’s military will begin training in Israel. Jarrin made the announcement as he hailed a new era of close Israel-Ecuador relations, a turn away from the approach of leftist former President Rafael Correa who cut military ties in 2010, in solidarity with Palestine.

The cooperation will be to ‘modernize’ Ecuador’s armed forces and to take ‘counter-terrorism’ courses, given by Israel’s military. Details also emerged about US$30 million worth of weapons that Ecuador has purchased from Israel in the last year alone.

Israeli officials have told Ecuadorean media that there is now a ‘flourishing relationship’ between the two countries.

Jarrin said this is because there is “now an environment of international cooperation that did not exist before”, in reference to the breakdown in relations that took place under the previous government of Rafael Correa.

During Correa’s period in office, he joined other leftist leaders in the region and formally recognized a Palestinian state and established diplomatic ties. There was also a long period of tension during that time, in 2010, Correa put an end to military cooperation with Israel and stopped the purchase of weapons.

Relations hit their lowest point in 2014, following Israel’s 50-day military campaign against Gaza in which over 1,500 Palestinian were killed. In protest, Ecuador, along with a number of Latin American countries, recalled their ambassador in Israel.

However, under current President Lenin Moreno, there has been a sharp turn in foreign policy. The country has begun a thawing of relations with the U.S. and Israel. The country has also joined in regional attacks on former allies of Ecuador, especially Venezuela, with President Moreno joining the so-called ‘Lima Group’ aimed at isolating Venezuela on the international stage.

Many analysts have also said this rapprochement with U.S. foreign policy interests, along with a new multi-billion-dollar IMF loan, were the driving forces behind Moreno’s decision to hand Julian Assange over to British authorities, where he is currently in prison and faces possible extradition to the U.S. to face charges related to his work exposing U.S. war crimes in Iraq and Afghanistan.