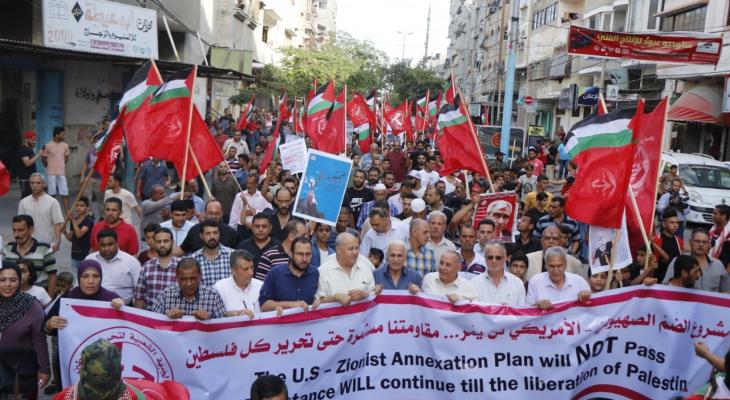 The Israeli apartheid regime is poised to commit a new crime against Palestine: the annexation of up to 30% of the West Bank. As things stand Israel effectively controls Palestine, with the heroic people of Gaza confined to an open prison and the hapless Palestinian Authority serving as accomplices to the occupation.

The significance of the annexation is twofold. First, it codifies the theft of Palestinian land. It is a statement to one and all, “We are stealing this, and it is ours forever.” Second, it is the declaration of the end of a solution that was never really a solution at all, the so-called ‘two state solution.’

Israel was founded in the not-so-distant past on stolen land. It was a colonial project of British, and later U.S., imperialism, which came to fruition at a time when colonial empires were being swept away in a tide of struggle. At the time, American, British and Portuguese-backed white minority rulers dominated large swaths of Africa. Only the armed struggle involving millions of Africans brought that to an end. But in the Middle East, Western imperialism doubled down and used Israel as a weapon against the Arab peoples.

The plan for ‘two states’ on Palestinian land was never just, reasonable, or, in reality, viable, but for Western imperialism it was always the articulated plan, and a cover of Israeli apartheid’s continued existence. Then along came Trump, a shift in U.S. politics, a declining U.S. empire – and the sham that was a two state solution is gone. The Trump administration has made it clear it plans to support the annexation, the same as it backed the Zionist annexation of Syria’s Golan Heights, and moved the U.S. embassy to Jerusalem. In Israeli-occupied Syria, the Zionists have named a settlement after Trump.

If the planned annexation goes through, it would seize the Jordan Valley along with its arable land, water and mineral resources, After this you don’t need a degree in cartography to look at map and realize there can be no ‘two states’ – just one apartheid Israeli occupation.

The great Chinese revolutionary Mao Zedong made the point, “Historically, all reactionary forces on the verge of extinction invariably conduct a last desperate struggle.” That is exactly the position that occupiers of Palestine find themselves into today. They talk big. They claim everything. And their defeat is certain. They live on stolen land and borrowed time.

RELATED CONTENT Reparations and the Palestinian Right of Return

The Zionist project is despised on the Arab “street,” where songs like I hate Israel will always find ready listeners. The camp of resistance is growing stronger across the Middle East. Israel’s imperialist backers are growing weaker. For if moribund imperialism was a cartoon, Trump could have been sent by central casting as an ideal political representative.

Here in the U.S. we need to demand an end to all U.S. aid to Israel. Nelson Mandela was correct to say that the rulers of Israel are worse than South Africa’s white minority rulers, and that is how we need to address the matter. The state of Israel is an apartheid state with no right to exist. Organizations that fight for freedom, like the Popular Front for the Liberation of Palestine, should be embraced by everyone who is serious about justice. Annexation will be another mile maker for a failed imperialist project. The Palestinian people are sure to win!