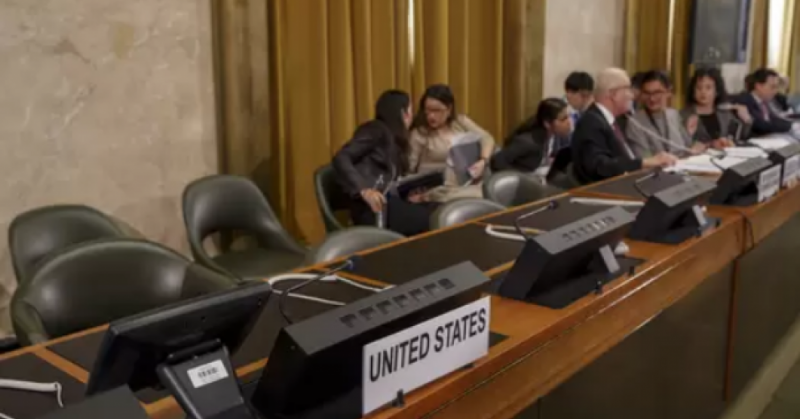 “We regret that the representative of the United States and its docile allies continue to bring to this forum matters that are outside the mandate.”

A U.S. official walked out of the United Nations-sponsored Conference on Disarmament in Geneva on Tuesday after a representative from the elected government of Venezuela assumed the rotating chairmanship of the forum.

Robert Wood, the American disarmament ambassador, told reporters after leaving the conference that U.S.-backed Venezuelan opposition leader Juan Guaidó “should be in this body, should be sitting in that chair right now.”

RELATED CONTENT: Another Diplomatic Defeat for the US: UN Conference on Disarmament in Geneva Chaired by Venezuela

“The former Maduro regime is in essence dead, it just doesn’t want to lay down,” said Wood, who announced the U.S. will be boycotting the conference as long as Venezuela ambassador Jorge Valero is chairing it.

According to Reuters, Argentina, Brazil, and Chile—which joined the U.S. in recognizing Guaidó as Venezuela’s “interim president”—are also boycotting the forum, which was designed to promote negotiations on nuclear disarmament and other arms control matters.

While the Trump administration enthusiastically supported Guaidó’s coup attempt and threatened military action against the Maduro government, a handful of progressive lawmakers denounced the Guaidó’s actions and warned that U.S. intervention in Venezuela could spark a devastating civil war.

After Wood walked out of the disarmament conference on Tuesday, representatives from Syria, Russia, and Venezuela slammed the U.S. for attempting to politicize the forum, Reuters reported.

“We regret that the representative of the United States and its docile allies continue to bring to this forum matters that are outside the mandate of the [Conference on Disarmament],” Valero told reporters. “It is not a forum for coup-mongering.”