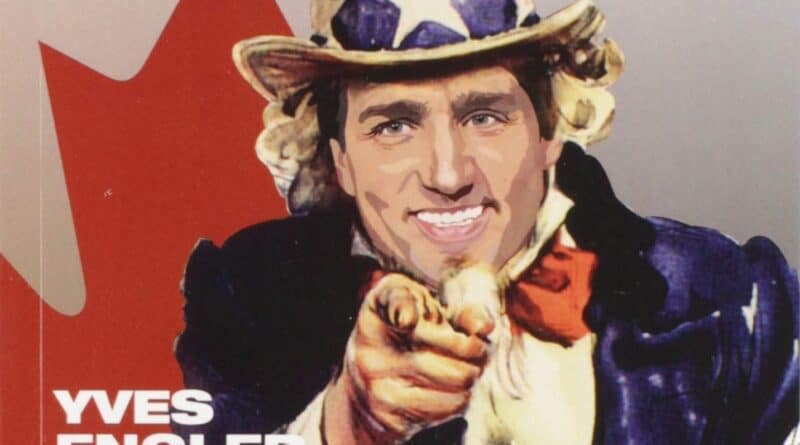 In June 2020 Canada’s grovelling desire to gain a seat as a non-permanent member of the UN Security Council was rejected. This may have been a surprise to some Canadians who bathe in the sunny light of the peacekeeping nation and resolute upholder of human rights and international law. How could Canada, of all nations, be rejected? In 2016 former President Obama had cried out that “The world needs more Canada.” Indigo Books picked up this phrase and turned it into a treacly birthday card greeting. But many nations in the world adamantly disagreed with these lovely sentiments.

Canada’s foremost archaeologist of hidden secrets and malevolent actions Yves Engler in his new book, House of Mirrors: Justin Trudeau’s foreign policy (2020), shows precisely why Canada did not get a seat on the UN Security Council. His aptly chosen metaphor—the “house of mirrors”—captures the huge discrepancy between the Trudeau government’s public face, smiling and smug, and its ugly and exaggerated distorted image in reality. One immediately thinks of the irksome photographs of Justin Trudeau shaking hands with Juan Guido or the far-right Ukrainian parliamentarian Andriy Parubiy. The reality behind these photos is akin to the deformative effect of the carnival house of mirrors on our self-presentation.

Engler argues that Canada presents its foreign policy (or mission in the world) as firmly committed to a rules-based order and upholder of human rights. The primacy of people over profits. The protection of the vulnerable and oppressed of the world. Defender of liberal democracy. But Engler tears these shibboleths to shreds. Justin Trudeau is anything but a “progressive.” His call following the 2015 election that he had a “simple message” for Canadians and the world: “Canadians we’re back” – has turned into a catastrophic nightmare. Many Canadians thought that electing Justin Trudeau as Prime Minister would move Canada in a different direction in foreign policy from the war-mongering of Stephen Harper. But this most decidedly has not happened.

RELATED CONTENT: The Hidden History of Canada’s Influence and Interference in Guyana

In fact, something terrible has happened to Canada’s actions on the international scene. Trudeau declared in a 2016 address to the UN General Assembly that Canada was “here to help.” That sounds lovely, but as Yves Engler demonstrates in eleven evidence-packed chapters, in reality Canada had decided to help and serve corporate interests and the US empire’s goal of global domination. The cover painting of Justin Trudeau dressed as Uncle Sam, smiling and pointing his finger at us, captures the terrible fusing of US global interests and those of Canada. Canada knows what it’s like to have to sleep with an elephant. They can roll over and crush you. President Kennedy loathed Prime Minister John Diefenbaker, Richard Nixon detested Pierre Trudeau and Lyndon Johnson thumped Lester Pearson against a wall. Trump doesn’t like Trudeau very much, either.

It may well be that the Trudeau anti-liberal regime is deeply fearful of doing anything to rile the fickle and ruthless Donald Trump. Canada’s foreign policy decisions do not deviate from American interests. Canadian foreign policy is in the service of doing whatever it can to undermine any opposition to a deregulated, Neo-liberal, corporate dominated global order. Engler documents how the entire foreign service apparatus is mobilized to serve as instruments of the above interests. One is left reeling. It is excruciating to read how the rich and powerful get governments to do their bidding through endless lobbying. Engler puts the spotlight on various Jewish pro-Israel associations (such as the Jewish Defence League and the Canadian Jewish Political Affairs Committee) that have their eyes wide-open for any signs of sympathy for the plight of the Palestinians. They watch, then pounce.

Engler turns the spotlight on the hypocrisy of Canada’s claim of commitment to a rules-based international order. If by rules is meant adherence to international law, then Canada’s actions to overthrow the Venezuelan government and impose illegal sanctions (which included running the despicable right-wing gang of countries called the Lima Group) breach the UN Charter’s law forbidding this action. What rules does former Foreign Minister Chrystia Freeland think she was obeying? Her own? Engler examines the new “Canadian Monroe Doctrine” and documents how Canada works to overthrow governments that want to redistribute wealth to the poor. Trudeau seems to get along best with dictators (Engler has a short chapter on his chummy relationship with Rwanda dictator Paul Kagame).

And since when did Canada assume that Latin America was a playground to topple governments who threaten, say, Canada’s massive mining interests? Engler’s critique of the Trudeau government’s willingness to go to the ends of the earth to ensure profit-making for its banks and mining companies is one of the book’s artifacts now on display.

In a devastatingly critical chapter, “Loving monarchy, hating Palestinians,” Engler reveals two crucial things: that Canada’s uncritically astonishing voting in favour of whatever Israel wants to do as well its silence on Israel’s endless, criminal violation of Palestinian human rights and dignity can scarcely be grasped as a rules-based policy. Both the US and Israel do not adhere to international law. They do whatever the hell they want and nobody, including Canada, raises a peep about Israel’s daily bombing of the Gaza Strip or more settlements built in the occupied territories. Both Trudeau and Freeland are hypocrites who publicly declare their defense of human rights, but remain silent on Saudi Arabia’s ghastly human rights (as well as other Middle Eastern countries) record as they simultaneously sell them military weaponry. In fact, we might argue that Canada will accuse a country, say Iran, China or Russia, of human rights breaches only when this kind of phoney tough talk serves economic or US imperial interests.

Some commentators such as Jocelyn Coulon (Canada is not back: how Justin Trudeau is in over his head on foreign policy [2019]) has pointed out the failure and stupidity of Freeland’s attitudes to Russia. So has Engler. Ms. Freeland, now Canada’s Covid-19 Minister of Finance, has played a devious and slippery role in engineering ethnic right-wing Ukrainian support for the US-engineered coup in the Ukraine. Freeland has openly supported neo-fascist elements in the Ukraine (and Canada); in fact, her grandfather was a Nazi propagandist during WW II. She has been silent on the violation of human rights in the Ukraine (with its neo-fascist battalions such as Azov wreaking havoc), always hiding behind her own anti-Russia blanket.

In fact, Freeland has adopted an extremely hostile stance toward Russia and has promoted polices such as sending Canadian troops to Latvia to threaten Russia. This anti-Russian hostility throws mud on the “Canada-as-peacekeeper” image. It also is a stupid policy because Canada must keep open its relationship with Russia because we share the Artic with a powerful country that completely outnumbers Canada in shipping vessels suitable for icebreaking in a frozen climate (see Sandrine Baccaro and Philippe Descamps, “Breaking up the ice in the contested north,” Le Monde Diplomatique, May 2020).

The muckraker Engler is at his best digging around to discover the “ugly Canadian” abroad. Calling Trudeau a “Climate change criminal-spewing carbon dioxide,” Engler documents how Trudeau spent 10s of billions of dollars on heavy carbon emitting jets and naval vessels. He has not eliminated fossil fuel subsidies. Ottawa offers billions to assist oil, gas and other fossil fuel firms. The Liberals spent $4.5 billion on the Trans Mountain pipeline and related infrastructure. This investment was to expand heavy carbon emitting tar sands oil in Alberta. Canada is unlikely to reach 2015 Paris climate change goals. And sneaky Justin rejected a proposal by Chancellor Angela Merkel to press Trump on climate change. For Engler, Trudeau’s failure to “declare, legislate and fund a massive justice-based transition off fossil fuels is disgraceful.”

Perhaps this is enough to entice you to buy Engler’s new book and absorb his detailed analysis. It is important to do so because Engler counsels us in his concluding chapter that mainstream media has mostly closed off listening to critical voices. He states: “The overall lesson to be learned from this book should be that people must look past the rhetoric offered by politicians to describe what Canada is doing around the world. Just because the Liberals say more progressive things than the Conservatives doesn’t mean their governments are, in fact, more progressive. Grassroots organizations that speak truth to power are essential to inform Canadians about what is being done in our name across the planet. We can’t only rely on corporate media outlets for information about international affairs. And when we know or government is doing something wrong we must speak up, make noise, disrupt – that is the only way our voices will be heard above the demands of entrenched power.”

Dr. Michael Welton is a professor at the University of Athabasca. He is the author of Designing the Just Learning Society: a Critical Inquiry.