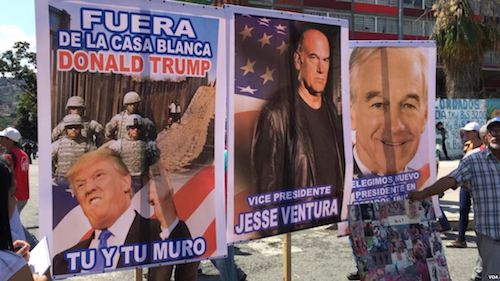 The crisis that has engulfed Venezuela represents an international power struggle that has, for the last five months, defied resolution.

At one side of the turmoil is the Trump administration and at the other is President Nicolás Maduro, who officials in Washington have vowed to remove from office. The person chosen by administration officials to replace Maduro and the socialist government is Juan Guaidó, president of the National Assembly. Angered by the presence of a socialist country in the Western Hemisphere, the U.S. has been flexing its muscle and exerting its considerable power economically and in other ways in an attempt to force Maduro out of office.

The latest chapter of the saga occurred on April 30, That’s when Guaidó, the man who has declared himself interim president in January, appeared on social media in the pre-dawn hours of April 30 proclaiming the imminent end of the government of President Nicolas Maduro. But by day’s end, the expected uprising had fizzled out as defections from the military didn’t happen and the people failed to rally around Guaidó.

“Today, brave soldiers, brave patriots, brave men loyal to the constitution have heard our call. We have finally met on the streets of Venezuela,” Guaidó said near the La Carlota airbase in eastern Caracas. “The time is now. We are going to achieve freedom and democracy in Venezuela.”

Standing beside Guaidó in the video was Leopoldo López, a fellow opposition member who had been under house arrest since 2014. His movements had been curtailed after López — former mayor of a municipality in Caracas — lead violent anti-government protests. Those with knowledge of Venezuela said Lopez’ presence very likely rattled those who may have considered joining because he is considered a radical. The Supreme Court has issued a warrant for López’ arrest which may have prompted his decision to seek asylum, first in the Chilean and then Spanish embassy.

Cultural educator and activist James Early, a frequent visitor to Venezuela and a vocal opponent of U.S. intervention, blasted the U.S. attempts to depose Maduro.

“This is a dangerous escalation of a violent sector of the opposition in cooperation with the most violent sector of the Trump administration,” he said during an April 30 discussion about Venezuela on WPFW 89.3 FM. “For Eliot Abrams and Mike Pompeo, this was a gamble. They tricked a number of soldiers and are willing to put people’s lives in danger. The fascist Trump administration is trying to overthrow a government that the majority of Venezuelans voted for.”

“They need to call off the dogs of war. Citizens must press the elites in both parties,” continued Early, a member of the Institute of Policy Studies’ Board of Trustees. “This is a threat exercised by a rightwing government and will likely open a civil war an extend wars in Latin America. This is a bloody onslaught of Trump carried out by [Sen.] Marco Rubio. We must stand up to protect the international sovereignty and independence of Venezuela and act as global citizens to aid Venezuela.”

“I was expecting this,” said Main, director of International Policy at the Center for Economic and Policy Research of Guaidó’s abortive coup. “This administration is hell-bent on producing a military coup. They are putting pressure on the military and civilians which economic sanctions. This shows that from Day 1, the military coup strategy is based on a lot of wishful thinking.

“Threats and pressure for the U.S. government show that they don’t have a plan,” Main said. “This strategy is doomed. They don’t have a Plan B. They should initiate dialogue towards a negotiated settlement but [the U.S.] has been openly hostile to any dialogue. Maduro is open to dialogue and Mexico, Norway, Switzerland and the Vatican have offered to mediate. That’s where things stand.”

Journalist Anya Parampil warned during an anti-U.S. intervention rally in March that a sustained war against Venezuela is already underway.

“With that gang that has taken over in the White House, anything is possible,” Parampil, a writer with The Grayzone, told the rally crowd at Lafayette Park. “They have filled the administration with John Bolton and Eliot Abrams. They are creating terror in Venezuela. People are terrified, afraid of a U.S. intervention. I woman I talked to down there said we watched the U.S. destroy Iraq and Syria. And now they want to do the same to us. It’s psychological warfare. The U.S. is creating a pretext for a military invasion, but it didn’t happen. Venezuelans aren’t afraid to fight.”

“We need to recognize that war of Venezuela is already being waged. I don’t believe that we’ll see an Iraq-style war. We have entered a new phase of using the media and the weaponizing international capital and finances. It’s financial terrorism. All of this is a direct result of U.S. policy.”

To illustrate Parampil’s point, earlier this year the U.S. government seized $7 billion of Venezuelan oils assets from Venezuelan state-owned oil company, Petróleos de Venezuela, S.A. (PDVSA), leaving it “at the disposal of the legitimate interim president,” Guaidó. Meanwhile, after pressure from Secretary of State Mike Pompeo and National Security Adviser John Bolton, The Bank of England has refused to release 14 tons of gold valued at $1.2 billion to the Venezuelan government, and according to Jorge Martin of Marxist.com, Guaidó has lobbied the British government to put these assets at his disposal as well.

The human toll is also staggering. Noted economist Jeffrey Sachs has said that since 2017, 40,000 Venezuelans have died because of the sanctions. Critics blame the sanctions and corruption and mismanagement of the Maduro government for shortages of food, medicine and other basic commodities and the collapse of oil prices and the strangulation of the economy by the U.S. has made the lives of Venezuelans still in the country a living misery.

Guaidó said in the pre-dawn video that he was not advocating a coup but a “peaceful rebellion,” adding that Maduro no longer had the backing of the armed forces. But both he and Trump officials miscalculated because both groups have so far remained loyal to the president.

Clearly embarrassed, Bolton tried to shame Venezuelan military leaders, including Defense Minister Vladimir Padrino López, and other officials by naming them publicly. He contends that they agreed to switch sides in a secret agreement but reneged on their promise.

In the aftermath of the failed coup, the saber-rattling is continuing with Bolton and Pompeo signaling the administration’s willingness to send in the military. Yet, several media accounts note that Trump is trying to avoid stepping into yet another military conflict. Then there is consideration for the valid concerns of some regional leaders who are against military intervention because that would destabilize the region and cause more undue suffering for the Venezuelan people.

One aspect often ignored by mainstream media is that what is playing in Venezuela is suffused with class AND race. Many or most of those opposed to Maduro are from the upper and middle class and are, or identify as, white. When the late President Hugo Chávez won the presidency in 1998, he implemented the Bolivarian Revolution which filmmaker and educator Catherine Murphy said, completely transformed the lives and livelihoods of Afro-Venezuelans. Chávez brought the previously dispossessed into the political process, helping educate them and enshrining their citizenhood into the amended Constitution.

Several analysts point out that racism is one of the main engines and expressions of the counter-revolution. This is best illustrated by the fact that the National Assembly is overwhelmingly white, while the Constituent Assembly appointed by Maduro much more accurately reflects the makeup of the country.

“Venezuela is deeply divided politically and there is a financial/wealth divide but so many people are devoted to the revolution,” said Catherine Murphy, a D.C. resident who lived in Venezuela from 2006-2010. “He acted, started to run PDVSA, and the money went to pay for housing, paving streets, providing clean running water and nation-building. It benefitted everyone. He started the Mission Robinson Literacy Program and invited thousands of Cuban doctors who lived in communities practicing medicine for free.”

“Chávez also restored indigenous Ancestral land rights and gave rights that have never been afforded to Afro-Venezuelans. The people who oppose the Venezuelan government and those out here at the embassy in DC are fascists and the elite who can’t handle losing their privilege. The middle class had maids who started going to literacy classes, voting, organizing, mobilizing and having a dignified place in society and these people can’t get used to that.”

The power struggle occurring in the international arena is being played out locally at the Venezuelan embassy in Georgetown. Murphy said she responded to the call put out by activists who have occupied and protected the embassy for almost three weeks. She got there at 1.30 p.m. on May 2, and stayed out there until well past midnight of the next day, she said.

“It was an ugly scene going down,” said Murphy, activist, teacher and director of Maestra, a film that chronicles the year that Fidel Castro orchestrated to dramatically increase Cuba’s literacy rate in 1961. “It was so crazy out there. The Venezuelan opposition are almost all white and reek of privilege based on how they act. It was so aggressive and nasty. I wish I had taken some video.”

“The Venezuelan opposition were right on the edge of being violent,” Murphy said. “They were insulting people saying nasty, disgusting things, making racist, sexist and homophobic comments. They were yelling at a member of embassy staff saying they knew where he lived and would come to get him. That’s some nasty s—. They had bullhorns and emergency sirens and were blasting it forever. It made me think about torture.”

Since Carlos Vecchio went to the embassy and spoke to pro-Guaidó supporters last week, more than 100 of them have laid siege on the embassy building. Guaidó appointed Vecchio as “ambassador.”

Murphy said representatives of almost a dozen organizations have added their support to the Embassy Protection Collective. This includes Code Pink, BYP 100, members of the DMV Black Lives Matter Movement, a Peace and Justice organization from Richmond, the ANSWER Coalition and others.

She said the pro-Guaidó contingent broke through police lines several times and assaulted people bringing food to the Embassy Protection Collective, as well as verbally berating journalists and those who came out to support those occupying the embassy. To her consternation, Murphy said D.C. police and the Secret Service stood by and did nothing. Journalists and supporters of the collective have been sharing video on social media showing the aggressiveness of the other side.

“I didn’t expect to stay that long but I couldn’t leave. I was so concerned,” Murphy said. “The opposition was so horrible. The sirens and yelling went on for 12 f—— hours. The good news is people are still inside. They’re holding it down. The embassy supporters outside held it down too.”