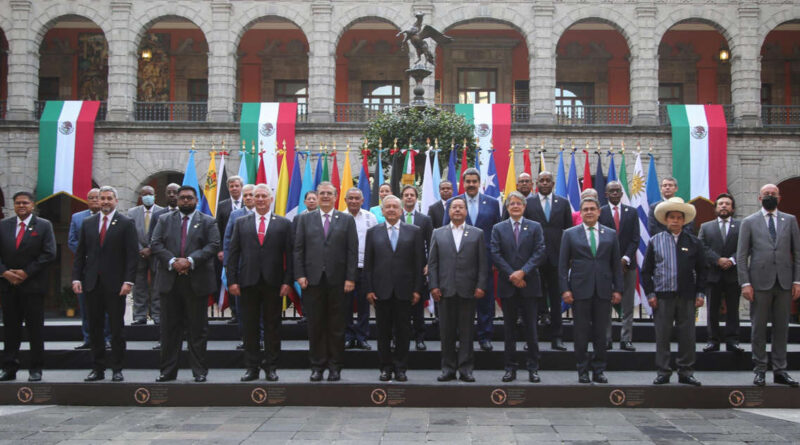 The heads of state of the regional block agreed on a 44-point declaration which addressed the strategy against COVID-19 and climate change and took a stand against the blockade on Cuba.

The VI Summit of the Heads of State of the Community of Latin American and Caribbean States (CELAC) was held in Mexico City on Saturday, September 18 and concluded with the approval of a 44-point declaration. The historic summit saw the participation of 31 countries and the presence of several important leaders, such as Venezuelan president Nicolás Maduro, Bolivian president Luis Arce, Peruvian president Pedro Castillo, Cuban president Miguel Díaz Canel, Uruguayan president Luis Lacalle Pou and others.

Despite the political differences among the participants, the joint declaration was approved unanimously and addressed key issues of political sovereignty. It called for an end to all unilateral coercive measures like the ones suffered by Cuba and Venezuela, supported Argentine sovereignty over the Malvinas Islands, and supported regional strategies to address the public health crisis, and many others.

The resolution also condemned the international community’s lack of will to end vaccine apartheid and ensure that all countries across the world have the necessary tools to confront and contain the COVID-19 pandemic. It also highlighted the importance of the Cuban vaccines.

RELATED CONTENT: CELAC: Latin America’s Greatest Strength is Its Unity in Its Diversity

The summit was met with widespread enthusiasm for being able to bring together diverse political actors across the region and uniting them. Also of note was the fact that the summit was held in Mexico. Following the election of Andrés Manuel López Obrador, the country has taken great strides in helping forge greater cooperation among countries of the region. Over the past month, Mexico has hosted the groundbreaking talks between the Venezuelan government and opposition forces.

Many of the leaders spoke on the importance of the summit and CELAC itself, and called for it to be strengthened.

Miguel Díaz Canel said “The founding of CELAC [in 2010] highlighted more than two centuries of struggles and hope; and constituted an important moment for the history of Our America. Fidel qualified it as the most transcendent institutional moment of the hemisphere in the century.”

He added, “One decade later, we continue to build and consolidate it, with the objective of recovering from the devastating effects of a pandemic that has exacerbated the multidimensional crisis that already affected the world, reduce the enormous gaps that makes us the most unequal on the planet, and advance the well being of our people.”

The Mexican foreign minister Marcelo Ebrard, in a press conference, said the region is in a new moment as “a year and a half ago we did not speak, and now we are seeing how to be self sufficient in vaccine production, it is a huge change.”

The declaration
As previously mentioned, the 44-point declaration has important agreements on pressing issues that are facing the region. Several immediate actions were approved including the creation of a fund to address the impacts of climate change, calls for the creation of infrastructure to produce and distribute medical supplies and vaccines, especially the Cuban-produced ones, to help countries face the COVID-19 pandemic.

An agreement was also made to bring a common position to the United Nations’ COP26 Conference in Glasgow, and the need for support in taking measures to cut emissions and prevent climate change, but also in recovery from the impact of climate change. The region has been one of the most hard hit with droughts, tropical storms and hurricanes, and other natural disasters which have caused mass displacement, destruction of infrastructure, and loss of human life.

The Mexican foreign minister said in the press conference “we are content because Latin America and the Caribbean approved something unanimously,” he added that “we are going to work together so that we do not get behind, so that we have technology and we can improve our possibilities of well being.”

Featured image: The VI Summit of the Heads of State of CELAC. Photo: CELAC