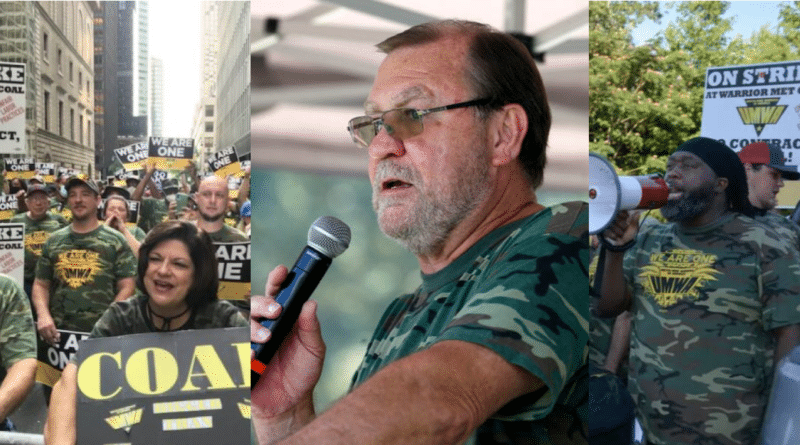 Please join us for this webinar with Larry Spencer this Tuesday, September 28, at 7:00 pm EST

Larry Spencer, UMWA District 20 Vice President, represents the 1,100 coal miners in three UMWA locals which on strike against Warrior Met in Alabama since April 1, 2021. He will give an update on the strike in a September 28 webinar. The strikers are fighting to reverse concessions that were foisted on them in 2016 when BlackRock and other billionaire creditors set up Warrior Met Coal and took over mine operations with the aid of a bankruptcy court.

To keep their jobs, Warrior Met made the miners work up to seven days a week and take a $6-an-hour pay cut, accept reduced health insurance, and give up most of their overtime pay and paid holidays.

BlackRock’s net income was $1.55 billion in the second quarter of 2021, with a record $9.5 trillion in assets. Warrior Met makes up just a tiny fraction of its portfolio.

UMWA President Cecil Roberts pointed out, “The workers gave up more than $1.1 billion in wages, health care benefits, pensions, and more to allow Warrior Met to emerge from bankruptcy five years ago. The company has enjoyed revenue in excess of $3.4 billion in that time. But it does not want to recognize the sacrifices these workers made to allow it to exist in the first place. All those billions came up to New York to fatten the bank accounts of the already-rich.”

“They’re making us work seven days a week, up to 16 hours,” says Brian Kelly, president of United Mine Workers of America Local 2245, who’s worked in the mine for 25 years. “Now we’re forced to work every holiday except Thanksgiving, Christmas Eve, and Christmas.”

Excessive overtime is a key issue in the strike. Miners have been forced into 12-hour shifts stretching into weekends—without the double pay on Saturday and triple pay on Sunday that they used to get.

Health insurance went from $12 for seeing any doctor in the world to $1,500 family deductible and co-pays up to $250. Given work conditions in a coal mine, health care is vital. Miners face silicosis, black lung, diesel, smoke.” Black lung is caused by breathing in coal dust, which silts up the lungs, scarring and destroying them.

Another main dispute is that management is demanding the power to fire strikers and to give strikebreakers and new hires seniority priority.

Strikers blocked scabs from entering the mines—until the company obtained an injunction to stop them. Strikers have been arrested and run into by vehicles driven by company employees.

On July 28, 1,000 miners and supporters rallied in New York City to protest outside the offices of BlackRock Fund Advisors. There, South Dakota Federation of Labor president Kooper Caraway told Wednesday’s demonstrators that “workers all over the world are going to stand with you and support you, and there’s nothing BlackRock or any other rich asshole can do about it.”

Hamilton Nolan wrote an excellent report on one of their biggest rallies a week later, August 4:

“There were more than a dozen CWA members from Atlanta who worked for AT&T, decked out in red shirts. There was a gaggle of UAW members. There were Teamsters, and teachers, and government workers, all proudly in their union t‑shirts. There were union officials from Georgia and Kentucky and Tennessee and South Carolina. There were presidents of locals from other states, climbing the stage to present $500 checks to the strike fund. There was an entire tent full of longshoremen wearing custom-made white t‑shirts that said ​“Port workers in solidarity with mine workers.” They had come from Charleston, Jacksonville, and Mobile, Alabama, on a single bus that stopped in each city, collecting the comrades.

“I spoke to many of these attendees and, to a person, the question of why they had gone to all the trouble to show up was answered as if it didn’t require any explanation at all. ​“Solidarity,” they said. ​“They supported us, so we’re supporting them.” ​“This is what the union’s about.” To take a 30-hour round trip on a bus was, for them, a no-brainer. This is what the union’s about. For one day, this was just common sense. But in the context of the United States of America in 2021, this was a rare sight to behold.”

“The crowd at the Brookwood rally was multiracial. Not multiracial like a fashion ad, or a painstakingly assembled corporate board, but a large group of Black and white people united for a common purpose. The UMWA miners who are on strike at Warrior Met now are an integrated group, and so their supporters in the community are integrated as well.”

“It is possible, down South, to get a racially integrated crowd where everyone agrees politically, but to get thousands of Black and white people whose politics range from strongly pro-Trump to strongly pro-Black Lives Matter together in a single place, in total unity of purpose, with virtually no conflict, and without being the explicit result of trying to assemble such a crowd to satisfy some sort of demographic diversity goals — well, that just doesn’t happen that much, ever.”

“This is the promise of unions. Not just better wages, or better working conditions, but a better society. Unions offer a frame for human interaction that does not otherwise exist. Our everyday experience in a society that is racially segregated, unequal, and politically polarized tells us that getting young and old and Black and white and left and right all together for something should be extraordinary or impossible; but at a union rally, where everyone’s common interest is plain to see, it becomes natural.”

Little mainstream news has covered the strike, although ABC News had favorable report.

You may donate to support the strikers electronically or sending a check to UMWA 2021 Strike Fund, P.O. Box 513, Dumfries, VA 22026. Messages of support can also be sent umwadistrict20@bellsouth.net.