An illustration by Oliver Munday for Anne Applebaum's 2021 article titled The Bad Guys Are Winning, which featured on the cover of The Atlantic. The illustration shows, from left to right, full body images of the following presidents Nicolás Maduro (Venezuela), Alexander Lukashenko (Belarus), Vladimir Putin (Russia), Xi Jinping (China) and Recep Tayyip Erdoğan (Turkiye); all dressed like mob bosses in black suits. Photo: The Atlantic.

Cold war veteran and former Radio Free Europe broadcaster George Urban is said to have spoken for his colleagues when he admitted, in a 1992 edition of The Times, to “a curious pang of loss. A sparring partner who had in some ways served me well had fallen by the wayside. A predictable foe beyond the hills, often heard but seldom seen, had paradoxically been a source of reassurance. Having a great enemy had been almost as good as having a great friend and—at times of disaffection within our own ranks—arguably better. A friend was a friend, but a good adversary was a vocation. Or was it, I sometimes wondered, that my long preoccupation with the ‘dialectic’ had so thoroughly infected me that I could imagine no life beyond an adversarial one?’’

In the absence of the Soviet Union, the mappa mundi cooked up here in the United States of America and its satellites lacks the clarity and liveliness of Urban’s dialectic. Any degree of national consciousness—‘who are we?’— requires a world map, however infantile it may be. Much like how a child can only begin to know themselves by comparing themselves to others, each national consciousness too must stem from a map or constellation of sorts. As far as our awareness goes as participants in the US project, the fleeting experience of adversarial purpose which emanated from the Cold War has left us rather disoriented; surrounded by foreign dictators at best.

It humors me that the more a national leader disobeys the US empire, the more likely your average American is to know him, or her. Conversely, I would venture to say that those leaders who satisfy Wall Streets’ mandates hardly ever make the headlines, to the extent that these viceroys govern somewhat unnoticed by most Americans; in the shadows of the US media. Of course this rule of thumb is broken by a charismatic or blundering politician here and there. But even then, they tend to be seen as a spectacle, or comedian, reaching our screens thanks to their extra-political behavior, their accent or attire perhaps. Or maybe we know of them because they are cast as the victims of our enemies, Zelensky, the Dalai Lama, Netanyahu even.

We end up then with a landscape with a few meager proconsuls in the distant horizon—if we happen to know their names (maybe we have an aunt in France who’s told us about Macron), but the foreground is dominated by the authoritarians, those strongmen who oppose the Soros’ Open Society. Even Le Pen, with her stubborn NATO-blasting, has got more press than the actual head of state. In this regard, the liberal consensus could not be more in tune with the pulsations of the empire; we are keenly aware of those who represent resistance to our project.

These despots are presented much like the cast from a gangster film, Reservoir Dogs for example. “The Bad Guys Are Winning,” written for The Atlantic by a fervent Soviet-slanderer, sums up this way of peering through a keyhole, out into the world. “We keep changing presidents but they just cling to power,” goes the rationale.

Who are we then? The good cop, forced to reluctantly intervene in a world infringed upon by tyrants? The omnipresent eye? The truth? The universal empire, enlightening savages with the gospel of democracy, converting pagans to consumerism? Are we simply too everywhere, too omnipresent, with our innumerable military bases and black sites, to even notice ourselves? Maybe all nations should have a US military base, just like they should have a ministry of commerce.

For the empire, domestic legislation applies to as far as we enforce it; the jump from national to international law is hardly a stretch for us. But why even continue with the charade of international law when we can just write our own rules-based order.

There is something so sensational about the experience induced by what we might call the liberal establishment media. It’s the photos—we’re told they are the victims of today’s most trending regime—curated to evoke our deepest sorrows; the barrage of dictator caricatures, each more stylized than the last; and their photos, carefully selected for a cruel or erratic glance, evoking pangs of imperial self-righteousness and indignation. There’s the voices too, on NPR, teeming with empathy and liberal twangs for the trials of Uyghurs, the Ukrainians, or whoever’s in vogue.

What a pure emotional experience these liberals indulge in, it’s almost a shame to interrupt their catharsis. They really feel as if they’ve come to the rescue: “The people in Ukraine are suffering and they need us. Our tax dollars and donations are helping.” It doesn’t matter what led up to February 24, they need this decontextualized snapshot to relish their pain. Any mention of history will only dampen the sense of righteousness and solidarity. Besides, they were already eager for an excuse to take down their Black Lives Matter flags.

Today, decades of a nation’s history—or a war, like this one—can be reduced to a corny psychological profile of the heads of state; simplified to an individual’s whims and zeal, debased to a matter of complexes, paranoias, insecurities, heroism, grandiosity, nostalgia, or just erratic behavior. Indeed, history and politics have been psychologized and sentimentalized to the extent that we hear earnest accusations of Putin politicizing Russia’s gas trade. Never mind the absurdity of the claims—when did the economy stop being political?

It is as if national interests were just bureaucratic overhead infringing on globalism or the free market, those smokescreens of the US empire. There is something quite abstract and expansive, universal if you will, about these principles: the Open Society, the Free Market, Choice, Globalism, Fluidity, Democracy, and Deregulation; they only step into their full meaning when read from the perspective of an empire with outward inertia, clashing with the rigid structures of other states and seeking to pry them apart.

Of course, the charges of “politicizing” commerce never call to mind the US-enforced blockades, the structural adjustment programs, or the conditional “aid,” which could never have anything to do with this. The hypocrisy is such a constant that it can’t even be addressed. Or maybe the double standard is the point, it’s that we are different: we can do this but you can’t. 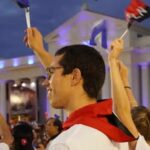 + posts
Kahlil Wall-Johnson is an Oregon-based member of the Orinoco Tribune team. He is an avid observer of the declining US empire and of the significance of this process throughout the world.
Tags: american exceptionalism authoritarism axis of evil Imperialism liberals patriotism