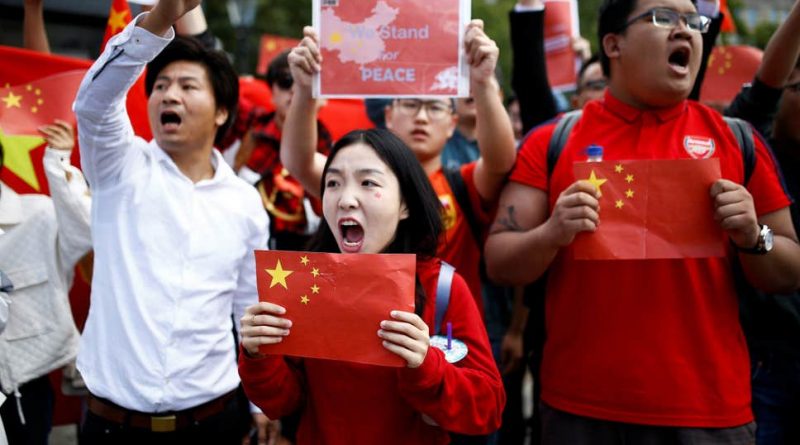 Minneapolis, MN – On October 18, the five-starred flag of the People’s Republic of China fluttered in the wind, as a group of patriotic Chinese international students marched in opposition to a reactionary demonstration billed as the “Liberty for Hong Kong March.”

The reactionaries made their way through the University of Minnesota Twin Cities campus “in solidarity with Hong Kong people against oppression on democracy and human rights.” Many of the ‘liberators’ wore black, and the leaders of the demonstration donned yellow armbands and face masks. Their demonstration coincided with the House of Representatives approval of the “Hong Kong Human Rights and Democracy Act of 2019” seen by many as an incursion on Chinese sovereignty.

The two groups converged on the Coffman Student Union and were quickly separated by several campus police officers, who stood between them. Both sides carried flags and signs to reflect their respective messages. Visible on the side of the ‘pro-democracy’ demonstration were the flags of British colonial Hong Kong, Britain, Hong Kong, and the former flag of Tibet, while the opposing rally expressed their own sentiments with dozens of Chinese flags and a large symbolic pair of the five starred red flag and the flag of Hong Kong.

By 4 p.m. a crowd had gathered on the steps overlooking the rival demonstrations, with shows of support for both sides present. The Liberty for Hong Kong March had procured a megaphone. The pro-China counter-demonstration took action and drowned the speaker out with chants of “Shame on you!” “Hong Kong is part of China!” and “Take off your mask!”

Some Chinese students present sang The March of the Volunteers and other patriotic songs, which drew fervent applause from their compatriots. Meanwhile, the Liberty for Hong Kong demonstrators tried to ignore the rival demonstration, with the exception of several members who engaged in bouts of verbal sparring from across the lawn.

By 5 p.m., the Liberty for Hong Kong rally began to disperse and along with it the counter-demonstration. It was a quiet end to a loud and occasionally tense affair and there was very little interaction between the two sides as attendees on both sides trickled out. When asked about the counter-demonstration, one Chinese international student said that the rally was organized on the Chinese social media app WeChat by individual students after learning of the Liberty for Hong Kong March’s announcement on Facebook. He said that they wanted to provide a counter-narrative to prevent the spread of lies and violence. When asked if any particular group had organized the rally, he reiterated that it was organized only by individual students.

With the riots in Hong Kong becoming increasingly violent as popular support wanes, the presence of such demonstrations inside the U.S., as well as the potential passing of U.S. legislation on the riots, show that there will be further U.S. interference in China’s internal affairs.