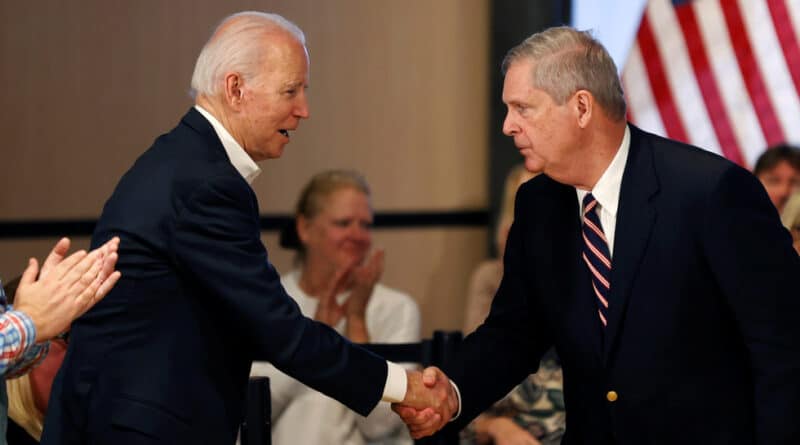 December 9, 2020.-  As the media reported that Democrat Joe Biden plans to appoint former Iowa Governor Tom Vilsack to head Agriculture in his administration, progressives called out ‘Mr Monsanto’ as a champion of GMO crops and big corporations.

Biden’s appointment of Vilsack fits his publicly stated intent to reassemble the administration of President Barack Obama, in which he served as VP. Vilsack was Obama’s agriculture secretary for all eight years, and spent the previous eight governing Iowa.

Tom Vilsack, a.k.a. Mr. Monsanto, is Biden's pick for Agriculture Secretary. He was secretary of agriculture under Obama. pic.twitter.com/us0vBWDer9

Vilsack was rumored to be among the candidates for Hillary Clinton’s running mate in 2016, but a coalition of environmentalist groups backing Vermont Senator Bernie Sanders for the nomination denounced him as “Mr Monsanto”who was beholden to industrial agriculture and favored the notorious maker of genetically modified organisms (GMO).

Upon the news of Vilsack’s nomination, Shadowproof editor and progressive journalist Kevin Gosztola brought up the secretary’s “Mr Monsanto” past, accusing him of “caving in” to Monsanto in 2011 to approve their GMO alfalfa without restrictions.

Two days before Vilsack was reported as Biden's pick for Agriculture Secretary, @stltoday published a major investigative report on dicamba weedkillers and how Monsanto knew they would cause "large-scale damage to fields" in America. https://t.co/s43SQ2V4uN pic.twitter.com/aiCVVrdi3Z

Vilsack also supported Monsanto’s merger with the German biotech giant Bayer, which Gosztola said ignored how it would result in rising seed prices for farmers.

Biden was declared winner of the November 3 presidential election by the media and Democrats, though President Donald Trump has not yet conceded and is mounting multiple legal challenges to the vote counts in several states – notably Georgia, Pennsylvania, Michigan and Wisconsin.

Vilsack is not the only official “recycled” from the Obama administration on the list of Biden’s announced cabinet picks. Former Fed chairwoman Janet Yellen was tapped for Treasury, former Secretary of State John Kerry would become “climate czar,” and his former deputy Anthony Blinken would advance to the top job at Foggy Bottom.

In the run-up to the election, progressives urged each other to vote for Biden in order to oust Trump, at which point they would “push” the mainstream Democrat to the left. Judging by the cabinet picks, that appears to have been a forlorn hope.

Another pick that infuriated the Sanders wing of the democratic Party was Neera Tanden, currently president of the Center for American Progress think-tank, as head of the Office of Management and Budget (OMB), the key agency for executing White House policies.