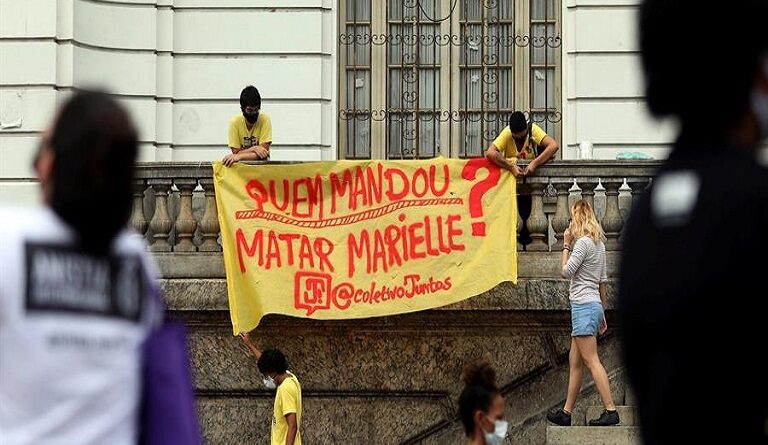 This Tuesday in Rio de Janeiro, more than 500 alarms sounded in unison to “wake up” a justice system that hasn’t yet resolved the killing of iconic Brazilian councilor and activist Marielle Franco, brutally murdered a thousand days ago.

At the exact moment in which the clock struck 8 am local time (11 am GMT) on Tuesday, 550 alarms sounded in front of the headquarters of the Rio Municipal Council, in a symbolic act organized by Amnesty International and the Marielle Franco Institute, reported the EFE news agency.

In the traditional Cinelandia square, an important political hot spot in in the center of Rio where the municipal parliament stands, the racket created by hundreds of black and yellow clocks, whose timers had been set to go off simultaneously, gave life to the phrase “one thousand days without answers.”

RELATED CONTENT: Venezuelan Reopens Border with Brazil After 10 Months Closure Due to COVID-19

“These 550 alarms are to wake up and to draw the attention of justice and public security organizations that are in charge of an investigation that can’t continue like this for a thousand more days,” Amnesty International Director Jurema Werneck told EFE.

The action took place without activists present, as citizens were not asked to participate, to avoid crowds at a time when the coronavirus is raging in Brazil. Over 6.6 million people have been infected, and more than 177,000 have died from COVID-19 in Brazil.

The call was for a participatory protest from home, demanding an “Awakening to Justice” for those asking for answers regarding Marielle Franco’s murder. The protest was to run throughout the day on social media networks using the hashtag #1000DiasSemRespostas.

A woman, black, bisexual, a defender of minorities, and critic of police brutality and extrajudicial killings, Franco was shot and killed on the night of March 14, 2018, along with Anderson Gomes, who was driving the vehicle in which they were travelling.

From humble origins and born and raised in the Maré favela, this left-wing activist, elected as a city councilor of the Cidade Maravilhosa (Rio, the marvellous city) in 2016, vigorously promoted social justice and fearlessly raised her voice to denounce abuses by the authorities.

A thousand days after her death, investigations into Franco’s murder have moved slowly, producing little results, kept under secrecy by the authorities.

“The lack of answers is a perverse reality and it is very negative because it increases and maintains the risk for those who fight for justice and dignity, and for sitting parliamentary it reflects an atmosphere of impunity. They see that their lives and their rights aren’t protected, a concern with several of the black candidates who were elected in the recent municipal elections,” said Werneck.

So far, two former police officers have been identified as the perpetrators of the brutal crime. They were captured a year after Franco’s murder, and remain behind bars awaiting trial.

According to the Prosecutor’s Office, Franco was assassinated because of her political actions, but today, December 8, 2020, a thousand days after her life was taken, Brazil and the world still don’t know who ordered Franco’s killing.