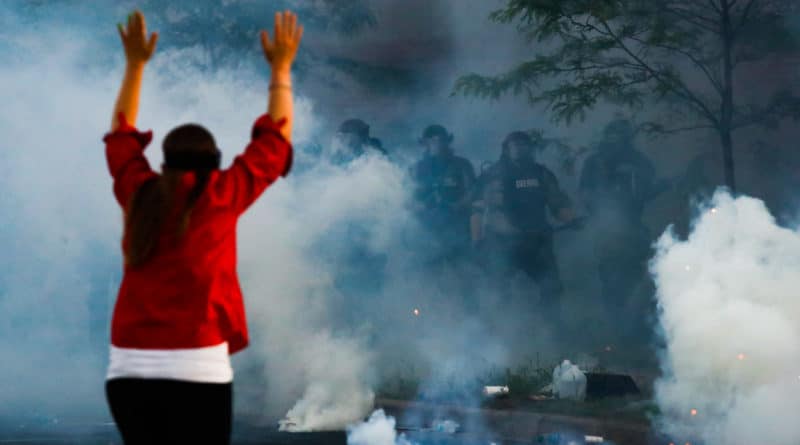 The latest instance of American social disharmony being blamed on Moscow is part of a long tradition, where some see an invisible Russian hand whenever it is useful.

The murder of George Floyd one week ago by Minneapolis police officer Derek Chauvin has sparked national and international protests, as millions have expressed their outrage over what they see as a racist and deadly policing system. But many in the political establishment are claiming that much of the crisis has been manufactured by powerful enemy nations, especially Russia.

Discussing the protests on CNN, Susan Rice, former U.S. Ambassador to the U.N. and National Security Advisor to President Obama, pontificated that the Kremlin was behind them. “I would bet, based on my experience – I’m not reading intelligence these days, but based on my experience – this is right out of the Russian playbook,” she said, adding that the U.S. cannot allow “extremists” and “foreign actors” to distract attention away from real issues. Instead of pressing her for evidence, host Wolf Blitzer (who worked for AIPAC, a lobby group interfering in U.S. politics on behalf of Israel) immediately backed up her speculation. “You’re absolutely right on the foreign interference, because we know for decades the Russians, when it was the Soviet Union, the Communists, have often tried to embarrass the United States by promoting the racial divide in our country,” he replied.

Susan Rice on unrest and violence at the George Floyd protests: "This is right out of the Russian playbook as well." pic.twitter.com/WlKwPcq98J

Rice continued: “We see it all the time, we’ve seen it for years, and frankly every day on social media, where they take any divisive painful issue, whether it is immigration, whether it is gay rights, whether it is gun violence, and always racism, and they play on both sides. Their aim is not simply to embarrass the United States, Wolf, their aim is to divide us, to cause us to come into combat with each other, to disintegrate us from within. And I would not be surprised to learn that they have fomented some of these extremists on both sides using social media, I would not be surprised to learn that they have been funding it in some way, shape or form.” As such, she presented issues like the treatment of black people as a Russian-backed talking point.

Senator Marco Rubio, a prominent Florida Republican influential in international affairs, claimed that tensions were being “very heavily” stoked by “at least three foreign adversaries” “promoting violence.” In an interview with ABC, Trump’s National Security Adviser Robert O’Brien said Rubio was “spot on,” claiming China and Iran were all involved in fanning the flames of racial resentment. Like with CNN, host George Stephanopoulos did not challenge his guest, but, in fact, backed him up, interrupting him to ask, “We also know that Russia has been actively trying in the past to spark racial unrest. Are they one of the adversaries who are now exploiting the situation as well?” O’Brien agreed Russia was partially responsible for the explosion in protests.

RELATED CONTENT: Demands for Trump Removal Grow as “Fascist” Speech Condemned as Declaration of War Against US Public

The irony is that the U.S. is openly sponsoring, organizing, and supporting uprisings abroad, like in Venezuela, Hong Kong, and Ukraine. Indeed, Rubio, Rice, and O’Brien are key figures in organizing them. While Moscow might indeed by promoting tensions, their measurable online reach is minimal; RT, the primary Russia-funded English-language outlet has received only around 10,000 worldwide views on its YouTube videos on the George Floyd protests.

The tenuous attempt to connect the anger over the Floyd murder is part of a much longer history of defaming black struggles for liberation by associating them with Russia. The celebrated playwright and activist James Baldwin long ago wrote that “when the nation has trouble with the Northern Negro, it blames the Kremlin.” The Civil Rights struggle was constantly written off as a Kremlin psychological operation; on Meet the Press in 1965, host Lawrence Spivak engaged in red-baiting Martin Luther King, Jr., asking him, “moderate Negro leaders, including you, have feared to point out the degree of communist infiltration in the Civil Rights Movement. Have communists infiltrated the movement?”

While the evidence linking the public anger over George Floyd’s killing to the Kremlin, Beijing, or any other foreign government is hazy, at best, the utility in blaming outside agitators for rioting or even for Donald Trump’s victory in 2016 is clear. For the national security state, it rallies the country round a jingoistic message, increasing their power and prestige. For centrists in the establishment, it gives them an out to look the other way and paper over the deep cracks in American society, allowing them an excuse not to change their policies or cede ground from insurgent populists. And for corporate media, foreign interference was a money-spinning story. The Russiagate conspiracy, now looking weaker than ever, dominated headlines for three years. Furthermore, the idea of foreign interference online pushed big social media companies like Facebook, YouTube, Twitter, and search engines like Google and Bing to partner with the national security state and alter their algorithms, promoting establishment media and de-ranking, de-listing or deplatforming alternative media that was challenging their dominance.

The latest instance of American social disharmony being blamed on Moscow is part of a long tradition, where some see an invisible Russian hand whenever it is useful.

Featured image: Tear gas canisters detonate beside a protester as authorities clear an intersection near the Minneapolis 5th Police Precinct, May 30, 2020, in Minneapolis. John Minchillo | AP