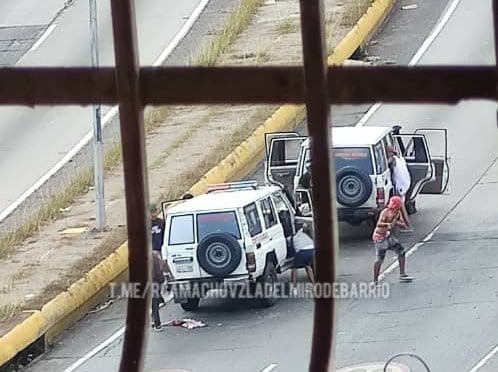 This Thursday, April 22, Caracas experienced another incident of shooting that reportedly took place on the Gran Cacique Guaicaipuro Highway, near the tunnels that connect the west and the southwest parts of the capital. The exchange of fire occurred between members of the El Coqui gang and officials of the Scientific, Criminal and Forensic Investigations Corps (CICPC).

It happened when officials from the Directorate Against Organized Crime of the Bolivarian National Police Corps was carrying out an operation in El Valle and El Cementerio. It was reported on social media that the objective of the operation was to capture some wanted criminals.

The operation was frustrated as the criminals fled and spread out in the surrounding neighborhoods. Around 3 o’clock in the afternoon, the aforementioned band took the upper part of the La Planicie tunnel and its surroundings from Cota 905 area, the sector of the city where the gang operates.

There, a confrontation occurred between members of the gang and a commission of the CICPC’s Anti-Theft Division.

The officials were inside the tunnel where they were ambushed. Four law enforcement agents were injured in the incident.

Police vehicles vandalized
The inspectors who had been shot were transferred to the Miguel Pérez Carreño hospital in an armored unit. Meanwhile, the police vehicles in which the agents were traveling were left on the highway, and the gang members vandalized those vehicles afterwards.

Photographs and videos posted online by various social media users reflect the destruction and vandalism carried out by the gang, terrorizing hundreds of families living in the area.

According to some media outlets, the officials who remained on the spot after the shooting were ordered by the Directorate to abandon the operation.

There is still some lingering tension in the neighborhoods of western Caracas after the dangerous shooting on Thursday.

Till date in 2021, there have already been about a dozen clashes between the police and El Coqui on the said Caracas highway.