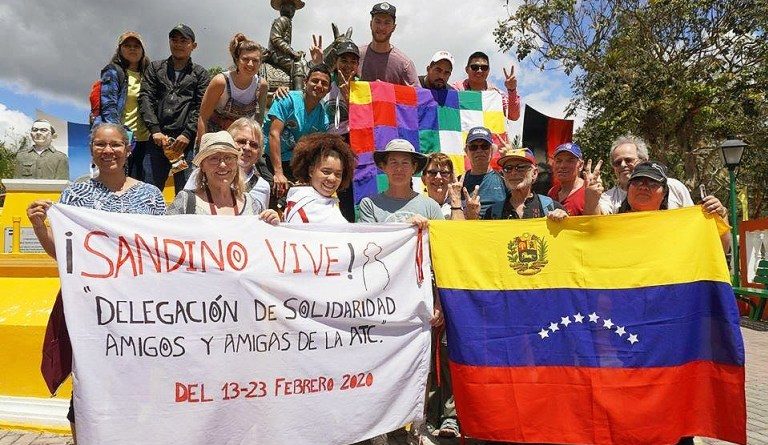 In February, Friends of the Association of Peasant Workers (ATC) and the Alliance for Global Justice (AFGJ) organized an agroecology and Sandinismo solidarity delegation to Nicaragua. Led by Friends of the ATC’s Coordinator and co-International Relations Secretariat, Erika Takeo, the delegation witnessed the current conditions in Nicaragua nearly two years after an attempted coup and the on-going work of the ATC in cooperative communities and unions around the country. Delegates included folks from Nicaragua, Honduras, Dominican Republic, Venezuela, Ecuador, Canada and the United States.

Other than the economy still recuperating from the attempted coup of 2018, the Nicaraguan people continue their struggle to remain independent and out of the grips of the neoliberal orbit of US imperialism. Despite the crippling effects of US sanctions, the Sandinista government of Daniel Ortega has made significant social advances since it came to power in 2007, including extending electricity to 97% of the population. The government is building new water and sewer systems, as well as funding tuition-free public schools through university. All Nicaraguans have access to the country’s universal health care system, regardless of income or employment, although the rural areas experience fewer services than the more urban areas.

It was apparent everywhere we traveled that the Ortega government is spending money on improving infrastructure and roads so that the country can easily and safely transport people and goods. And the country feels safe to be traveling around, with Nicaragua’s crime rate being the lowest in all of the Central American countries.

Gender equality is evident in some of their current laws. Fifty percent of government representatives must be women. For example, if there’s a male governor then there must be a female vice-governor. This progressive law makes Nicaragua unique in the Americas. Also, there is a Domestic Violence law that is actually enforced and, in some areas of the country, there is a police force made up of only women who respond to these cases, supporting women and children in homes and communities.

The Sandinista revolution remains strong, with the majority of Nicaraguans supporting the current Ortega government. Every Saturday, supporters march through the streets in Managua and other cities around Nicaragua. Graffiti and stencils of FSLN (Sandinista National Liberation Front) and other artwork adorn walls, and statues of Sandino stand proudly in central parks reminding everyone of the revolution and the struggle it takes for it to continue.

Our delegation focused on the agricultural cooperatives and unions working in the country, such as the ATC and La Vía Campesina (LVC). Agriculture makes up a large part of Nicaragua’s economy for internal markets, exports and subsistence farming relied on by campesino families. An enduring part of the revolution is land reform, which has been supported by the Ortega government by continuing to grant smaller growers land title regardless of gender.

The delegation visited several unions and cooperatives, which, in the spirit of the Sandinista Revolution, reject the corporate food regime that demands peasants produce cheap exports for commodity markets paying them very little, while selling them expensive seeds, fertilizers and toxic pesticides. The cooperatives and unions save and share their own, creole, non-GMO seeds and many maintain seed reservoirs. Nicaragua prohibits the import of GMO (genetically modified organism) seeds. Farmer-to-farmer education through the ATC and the LVC supports the horizontal sharing and experimentation of sustainable agricultural practices, rejecting the top-down education of more “developed” agribusiness-dominated nations.

Santa Julia, a women’s cooperative growing coffee for market, as well as for their own sustenance, has embraced the agroecological method. This includes the social, economic and environmental well-being of meeting their needs individually as well as communally. With an anti-capitalist, anti-neoliberal and anti-patriarchal methodology, they are improving their community by becoming food sovereign, composting, saving and sharing seeds, and finding ways to protect their crops from the effects of climate change. With the help of the ATC, the community was able to purchase equipment for processing coffee and, since March of this year, they now have running water from their well.

Other cooperatives, such as La Unión coffee cooperative in Jinotega municipality, and the community of Marlin Alvarado in Santa Teresa, Carazo, use agroecological methods of meeting their community’s needs. La Unión de Cooperativas Agropecuarias del Nueva Segovia (UCANS), a growers cooperative union in Somoto, has been organizing groups of cooperatives since 1998 to strengthen the social and economic well-being of growers. Their program includes: planning and coaching; exchange with other growers; technical assistance; seed banks; home gardens; crop management; and health nutritionists to the communities.

The radical practices of agroecology and food sovereignty are a figurative middle finger to US agricultural corporations. Nicaragua is about 90% food sovereign, meaning that they produce and consume 90% of the country’s food needs. This intentional and popular part of the revolution is one of the major reasons why Nicaragua can hold these powerful agricultural corporations at bay.

As I write this, the US House of Representatives unanimously passed a bill without debate to impose more sanctions on Nicaragua. Why is the US government so obsessed with destroying Nicaragua? Like the examples of Cuba and Venezuela, Nicaragua is in the crosshairs of imperialism for standing up and saying no to the neoliberal model of dependence. The assaults and attacks from the US continue, but the Sandinista Revolution will endure. We can help them by contacting our Representatives and educating them about the realities of Nicaragua and their struggle to protect their country and their right to participatory democracy.

Carissa Brands was a delegate in the recent Friends of the ATC delegation; she is an agroecological worker and a board member of the Task Force on the Americas.

Featured image: Friends of the ATC