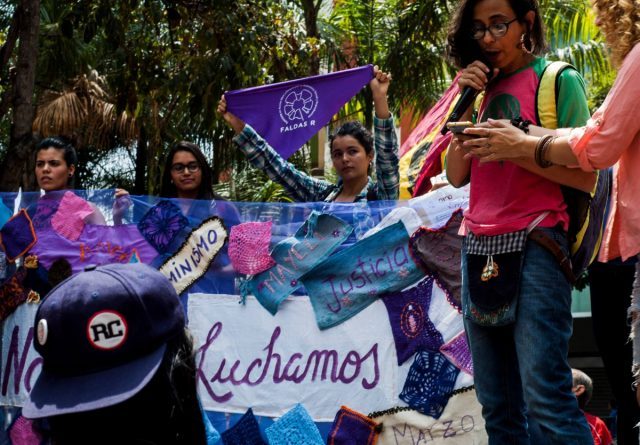 Amidst a complex reality, feminist movements in Venezuela look to advance their struggle and build unity.

International Working Women’s Day, March 8, landed this year in the midst of a complex scenario in Venezuela, with an ongoing coup attempt and a simmering threat of foreign intervention. Juan Guaidó, the latest opposition leader, swore himself in as “interim president” on January 23, a move that was followed by an escalated international aggression against Venezuela.

In this context the natural tendency is to close ranks and the instinct to centralice discourse, as much as possible, against the foreign threat. The tension paralyzed popular movements to a certain degree, calling on everyone to defend the country. Nevertheless, as March 8 approached, several feminist movements held meetings to discuss the agenda and struggle. (1)

Feminism in times of coup
Alejandra Laprea, a member of the Feminist Spider Network (La Araña Feminista) and of the Purple Ink collective (Tinta Violeta), told us that despite standing firm against a possible invasion, popular struggles cannot be left “for later.”

“Capitalism, patriarchy, are like weeds. If they’re not pulled out at once, at the root, they reproduce. That is why even in a country under threat and under siege we cannot leave it ‘for later,’ because otherwise, regardless of the outcome, the right-wing will win.”

However, feminist movements internationally were calling for a strike on March 8. But, with self-proclaimed Juan Guaido also talking about a strike, there was a risk that a women’s strike would end up boosting the efforts to topple the Bolivarian government. With that in mind, the feminist movements’ consensus was to reaffirm their solidarity with feminist struggles worldwide, but without calling their mobilisation a “strike.” The slogan “We Strike” (“Nosotras Paramos”) seamlessly turned into “We Fight”, or “We Struggle” (“Nosotras Luchamos”).

“We understand the internationalist dynamic and embrace the struggle of all women who, like us, struggle against all kinds of oppression around the world. But in our national context we decided that ‘we fight,’ not as something opposed to the call for a strike but simply adjusting it to our reality. Today Venezuela is facing the most serious threat of a war it has seen in the past 20 years, with an ongoing coup.”

The risk of embarking in a mobilization that in the current context could have ended up playing into the hands of the coup was a concern, which was spontaneously solved with an unambiguous slogan: “No Revolution Without Feminism” (“Sin Feminismo No Hay Revolución”).

The march that was prepared was put in doubt by the possible holding of an “official” march on March 8. Were that to be the case, the idea would be for these feminist movements to march as a block, since a separate march did not make sense. They would, however, make small detours from the official route to make specific stops (see below).

In the end, the true obstacle was the power outage that left more than 70 percent of the country in the dark after an alleged cyber attack against the electric grid. With no transportation or communications, Caracas and the rest of the country were brought to a standstill. Nevertheless, several women managed to meet and march to Caracas’ Plaza Bolívar, with another improvised and appropriate slogan “with or without power, we fight.”

Weaving struggles together
There are currently a number of feminist movements in Venezuela (1). Although plenty of struggles naturally precede Chávez, the feminist movements that debated and prepared ahead of March 8 can be considered part of the Bolivarian camp, with varying levels of closeness and criticism with respect to the state.

To this diversity we must add the “conflict and cooperation” relation between popular organizations and the state, and the co-optation logic that is always there, regarding both the agenda and bringing people from the popular movement into the state institutions. Once on the inside, the struggle is between the “normal functioning” of the state and the need to subvert it.

Therefore the current challenge is to build unity among popular feminist movements. Or, as Alejandra puts it, weave them together (“tejer”).

“For us as a network [the Feminist Spider], it is very important to build links between different organisations so that our banners grow stronger. In that sense “weaving” is a metaphor we have used for many years.”

During several meetings and discussions, feminist compañeras from different movements were also literally weaving/knitting, using recycled materials and threads donated in solidarity by the Chilean chapter of the World March of Women.

“Faced with an economic war and blockade, our response is to create, produce and weave solidarity among us,” she added. The end result was a banner that can be seen in the photo above.

In this regard, the idea was then to stage a march in Caracas on March 8 with several stops (see image). At each stop a banner would be visibilized, with one or more collectives taking the lead in the action.

One of the struggle fronts that was present belonged to the Tenants’ Movement, which is part of the Settlers’ Movement, with a particular focus on eviction resistance.

“Patriarchy has as a consequence that most Venezuelan households are headed by women. Therefore most tenants are women! That is why we are taking part in this feminist platform, to defend housing as a fundamental right,” stressed María Fernanda López Leiva, a member of the movement.

María Fernanda said that the number of evictions is on the rise, despite the existence of laws protecting tenants.

“It is a contradiction that in a supposedly socialist state a family can be thrown out on the street. At the end of the day the issue is class struggle, because tenants are from the pueblo, they are workers who cannot afford to buy a home,” she explained.

Among the demands or banners,the struggle for sexual and reproductive rights had an important place. Taking advantage of the fact that there is an ongoing constituent process, movements have pressed the National Constituent Assembly to advance their agenda in the new constitution draft on issues such as legalizing abortion (which is currently penalized in Venezuela) or same-sex marriage.

There was also an effort to bring campesino and indigenous movements on board. The social reproduction that results in the responsibilities of the home falling on the shoulders of women is not exclusive to urban settings. As a consequence, women are also affected by violence in the Venezuelan countryside. One of the planned stops of the march was precisely the Ministry for Agriculture and Land, to demand answers to several unresolved cases of campesino struggles for land.

A common thread to many current feminist battles is the existence of very advanced legislation, such as the law protecting tenants or the land law, but which are not enforced. This grants a legal basis to demand action from the state, and at the same time shows that having advanced legislation is not enough to change a macho, patriarchal culture in society and in state institutions themselves.

A very dramatic case was the recent murder of Mayell Hernández. The young mother and dancer was killed and everything pointed towards her ex-partner, yet it took an intense campaign and mobilization from feminist movements in order to finally spur the Attorney General’s Office into action.

The “Organic Law on the Right of Women to a Life Free from Violence” is another important example of an advanced piece of legislation which is not enforced. Be it because prosecutors classify crimes not as gender violence but as crimes of passion, or because the dominant patriarchal culture leads to “losses” of evidence, the result is a piece of legislation that does not fulfil its role in stopping violence against women.

“Feminist” Chávez as an ally
“The world has always been machista. That is why I declare myself a feminist. The socialist revolution should be feminist,” Chávez said in a 2011 speech. This is one of the many cases where one of Chávez’s main qualities shone, namely his ability to “talk” directly to popular movements without the intermediation of the state. Though his notion of feminism is not necessarily the one espoused by feminist movements, his position offers an important tactical advantage.

“We claim the feminist Chávez,” Laura explained. “While for some feminist movements it may seem contradictory that we claim a man, and a military man at that, it is thanks to Hugo Chávez that we could open a dynamic of participation that was denied to us before.”

This dynamic of participation is what has generated this plethora of feminist movements within this umbrella that we commonly refer to as “Chavismo,” grouped around different banners of struggle, with different levels of tolerance and cooperation with state institutions. The state will continue to be there, with its generally progressive content and its contradictions, and the challenge is to continue building the revolution.

“We have to find a way, as a people and as a feminist movement, to move forward in the construction of the feminist and socialist revolution, without leaving any banner behind, without thinking that one struggle is more important than any other,” Alejandra summarized.

Amidst a coup and amidst an economic war/crisis; with or without the state; with or without power, feminist movements will continue raising their banners and weaving their unity. The progress, or the mere survival, of the Revolution will only be assured by the leading role and the achievements of popular movements. And there is no revolution without feminism.